The Parallels Between the Salem Witch Trials and Mccarthyism

In The Crucible by Arthur Miller, John Proctor proclaims “Because it is my name! Because I lie and sign myself to lies! Because I am not worth the dust on the feet of those who hang! How may I live without my name? I have given you my soul; leave me my name!” This quote shows both the dilemma in the Salem Witch Trials, which Arthur Miller set his story in, and the era of McCarthyism which he kind of writes about; John was going to confess to being a witch but couldn’t because he didn’t want to ruin his name for his family.

Don't use plagiarized sources. Get your custom essay on
“ The Parallels Between the Salem Witch Trials and Mccarthyism ”
Get custom paper
NEW! smart matching with writer

He was an innocent man but died because he didn’t confess. This is very similar to what was happening during the 50’s when McCarthyism first started. Arthur Miller’s use of the Salem Witch Trials in the Crucible demonstrates an effective comparison between the injustices of the late 1600’s and those of his own time during the McCarthyism Era.

In the case of both the Salem Witch Trials and McCarthyism, the government that was in the lead at the time was out of control and had too much power. With the Witch Trials, the judges, like Hathorne, had ultimate power; they arrested anyone and everyone who was accused by another person and everyone was then put on trial. The judges all called court whenever they wanted. One example of this is Giles Corey. Giles did not want to give up the name of the person who gave him his information, so Judge Danforth says “you are a foolish old man.

Mr. Cheever, begin the record. The court is now in session.” But when putting Giles on trial doesn’t break him into giving any names, they torture him by putting stones upon his chest yet still does not confess or accuse anyone else despite his curtain death.

The same thing could be said about the United States Government during McCarthyism; Senator Joseph McCarthy claimed he had a list of over two hundred people in the State Department that were communists and who were known members of the American Communist party. This list that he was supposed to have caused the American public to panic, it created hysteria. Senator McCarthy caused a witch hunt by doing this; he was accusing people and investigating them. He eventually started accusing the army, at which point the President stepped in and realizing that this movement needed to be stopped.

During both of these situations, many people accused others just to save themselves from being punished. People during the Witch Trials accused people to keep from being hanged, and people in the McCarthy Trials accused others to keep suspicion off of themselves. A clear example of this during the Witch Trials is Abigail Williams; she accuses people of being witches and being with the devil so that she will not get in trouble for dancing in the woods and doing a love spell. Mary Warren also accuses others because that is her only way out.

In particular, Mary feels forced to accuse John Proctor of being “the devil’s man” after previously telling the court that she and the girls had been lying. If she doesn’t accuse John in that moment, she would be in trouble with the court either for lying before about seeing spirits or lying then, claiming she and the girls had not seen spirits. During the McCarthyism Trails people would also accuse others so that they could throw any suspicion away from themselves. People who got arrested were placed in front of a Senate committee and asked to name other people guilty of being a communist; this caused panic and hysteria to break out.

Additionally, in both of these eras people were considered guilty until proven innocent. The accusations that were made had no real basis, but they were made for many different reasons: money, position/power, land, jealousy, etc. In the case of the crucible, Miller gives many great examples of this, one being when John Proctor asks Cheever “On what proof, what proof?” when they take his wife Elizabeth away; people during that time had no proof to back the accusations that were made. Accusations were often made to get the land of those who were going to be hanged for being a witch. During the play, Giles says that Putnam accused Jacobs so that he could get his land, Giles gives Danforth a deposition and says “…There is none but Putnam with the coin to buy so great a piece.

This man is killing his neighbors for their land.” Another major target is anyone who seems weak such as women, children, and the homeless. As for McCarthyism, people were being targeted out of jealousy. Hollywood, in particular, was a big target for the trials. During this time a press release went out on behalf of the major studios that announced the firing of some people and stated they would not employ communists. Many actors in Hollywood were blacklisted and out of work, even though directors denied the fact that there was a blacklist. A major factor in this era was guilt by association, meaning that people that were associated with or were close to one who was accused was then also guilty and most likely to become the next victim.

Arthur Miller used the Salem Witch Trials in his play the Crucible to exhibit the injustices that were happening during his time period, the early 1950’s, on account of McCarthyism. The parallels that he drew between the Salem Witch trials and the McCarthyism Era showed that the Government had too much power that hysteria broke out because people were trying to save themselves, and accusations were being made with no basis or proof to back them. Arthur Miller’s the Crucible was a perfect way to expose what McCarthyism really meant to society during that time and its potential threat if American Society chooses to ignore its own history.

The Parallels Between the Salem Witch Trials and Mccarthyism. (2016, Oct 21). Retrieved from https://studymoose.com/the-parallels-between-the-salem-witch-trials-and-mccarthyism-essay 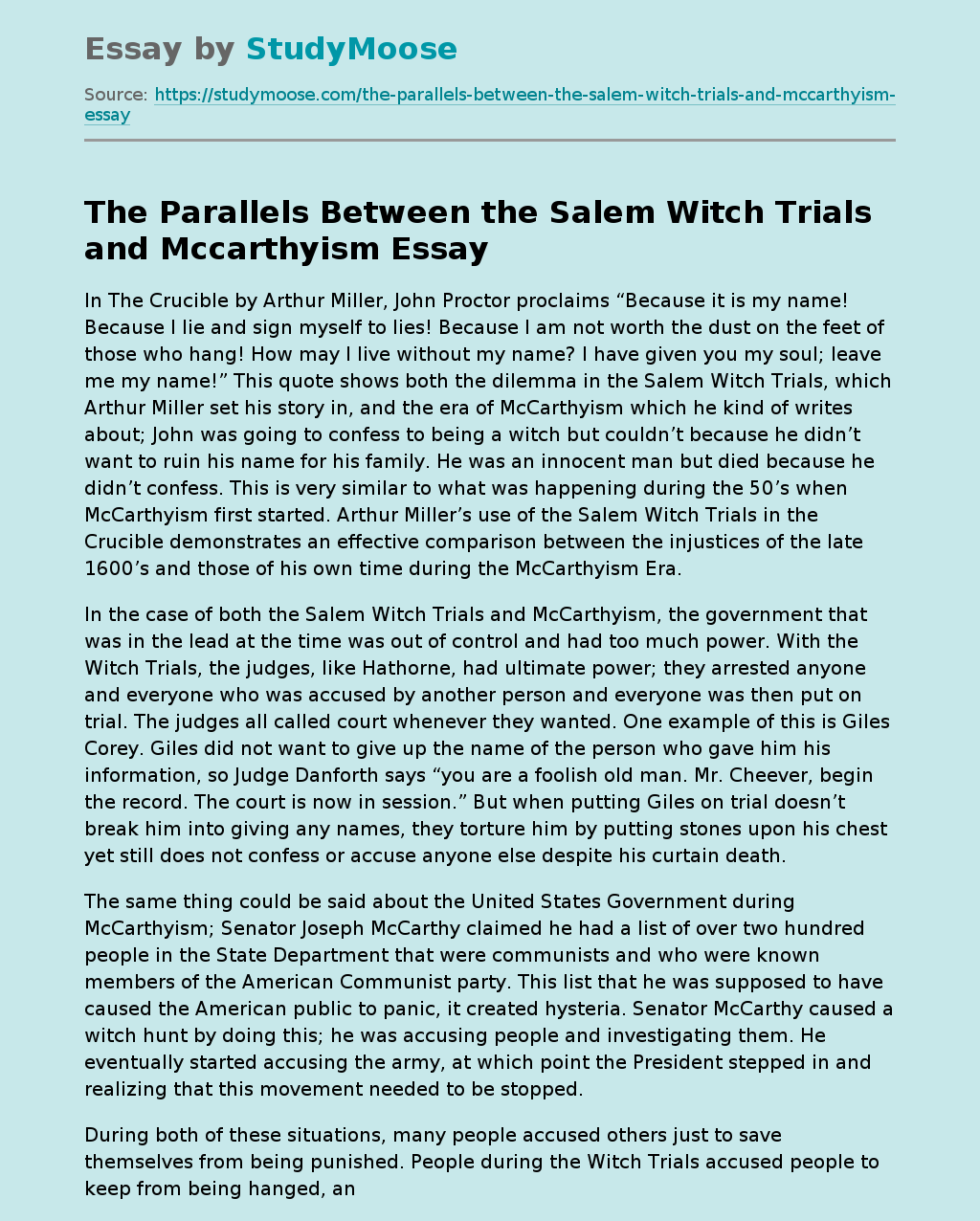