The Novel ‘Frankenstein’ as Illustration of the Fear

Some readers have seen the novel ‘Frankenstein’ as illustration of the fear of the power of science. To what extent do you agree with this view of the novel? [Plan Para 1 – context; it was written during a period of scientific breakthroughs and advances. Para 2 – is the novel more about the fear of how far man is willing to go for the acquiescence of knowledge? E.g. Walton and Frankenstein, use quote ‘I could see the same madness’ Para 3 – Is the word ‘fear’ accurate? Science is depicted as controlling yet irresistible to man’s nature.

Don't use plagiarized sources. Get your custom essay on
“ The Novel ‘Frankenstein’ as Illustration of the Fear ”
Get custom paper
NEW! smart matching with writer

Would admiration be more suitable? Para 4 – novel is ultimately a science fiction novel, it is not based on true events… it is important to remember whilst reading that a creature was never reanimated and it is a story conceived from Shelley’s nightmare.]

Mary Shelley’s Frankenstein is critically acclaimed as one of the pioneering works of science-fiction. First published in 1818, the idea of the act of creation was beyond all perimeters of contemporary knowledge.

However, it was written during a period of great scientific breakthroughs and advances in the understanding of the natural world, with Shelley’s research comprising of early 19th century texts from Erasmus Darwin and Humphry Davy. Victor Frankenstein’s use of electricity to re-animate ultimately made him the foremost electro-chemist in the later stages of the 18th century, but interestingly, although successful in his endeavours, he does not make pains to announce this breakthrough.

This is for fear of accusation of murder on behalf of Justine and his brother William, contrary to his first beliefs at the edge of creation; ‘Life and death appeared to me ideal bounds, which I should first breakthrough, and pour a torrent of light into our dark world’.

This leads us on to the perhaps more prominent theme of man’s thirst and desire to exceed levels of knowledge and therefore to acquire power. Robert Walton, the first and last narrator of the novel through the medium of his letters, displays similar knowledge-hungry characteristics to Victor Frankenstein. On an expedition to the shores of the North Pole that Walton so ‘ardently desires’ he comes across Frankenstein whilst pursuing the monster.

His desire to ‘to tread a land never before imprinted by foot of man’ echoes Frankenstein’s will to create life; both wish to accomplish something never before achieved. A sentiment of ‘What can stop the determined heart and resolved will of man?’ expressed by Walton in a letter seems prophetic, and touches on the subject that man has no limits when there is such a drive to succeed. However, Frankenstein himself directly warns Walton of the destruction that such a desire can wreak, breaking the narration in order to do so; ‘Learn from me, if not by my example, how dangerous is the acquirement of knowledge’, clearly instilling in Walton the fear of the power of science combined with man’s deadly desire to dominate achievements.

However, it is also important to question the use of the verb ‘fear’, and if it is used accurately in this context. To a mild extent, in the early parts of the novel, science is admired, not feared, in fact it can be said that the danger of Frankenstein was his surprising lack of fear in being so bold in the face of science. Upon Frankenstein’s arrival at Ingolstadt to further improve his knowledge, Shelley uses the powerful image of ‘the high white steeple’ as a symbol of power, and Frankenstein’s professor, M. Waldman, encouragingly quotes to Frankenstein that ‘the labours of men of genius, however erroneously directed, scarcely ever fail in ultimately turning to the solid advantage if mankind’.

Both of these uses of language encourage the admiration and pursuit of science, with M. Waldman clearly condoning Victor’s ambitions, excusing the soon-to-be weighted conscience of Frankenstein on behalf of the actions of the Creature. However, to conclude, it is important to remember whilst reading Frankenstein that it is fiction and to date a human being has never been reanimated from beyond the grave. The plot of Frankenstein was conceived from a nightmare of Shelley’s, after Lord Byron challenged the group to write a ghost story at Lake Geneva.

Mary now had the basis of her story and went on to complete the novel in the spring of 1817. There is also the interpretation that Frankenstein can be translated as Mary’s fear of childbirth, due to her previous miscarriages or the chance of a deformed baby that she could not love. Due to the remembrance that the novel is fictitious, I do not see the novel as an illustration of the power of science, but instead a warning of the dangerous nature of man.

The Novel ‘Frankenstein’ as Illustration of the Fear. (2017, Feb 17). Retrieved from https://studymoose.com/the-novel-frankenstein-as-illustration-of-the-fear-essay 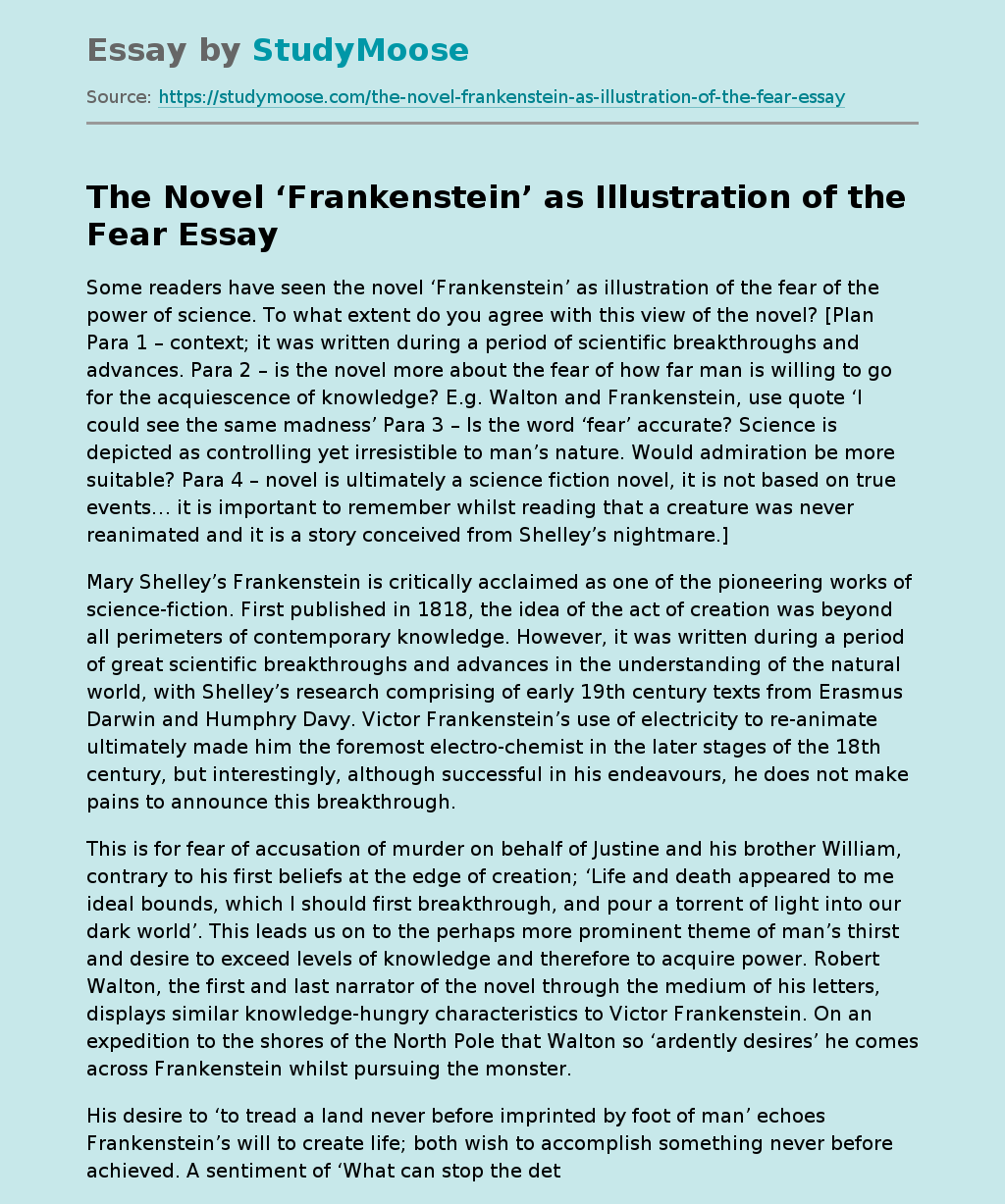