The Nomothetic Approach in Personality Testing

The Nomothetic approach is an approach to personality assessment. The term comes from the Greek word “nomos” which means law. In an online dictionary homothetic is defined as “giving or establishing laws”. Look for universal laws of behaviour. It is based on traditional, classical science. In psychology the nomothetic approach focuses on people in general, trying to find regularities or laws between people. The approach was proposed by a German philosopher Wilhelm Windelband in the 19th century.

The American psychologist, Gordon Allport (1937) looked at these two major ways to study personality, the nomothetic and the idiographic.

Don't use plagiarized sources. Get your custom essay on
“ The Nomothetic Approach in Personality Testing ”
Get custom paper
NEW! smart matching with writer

Nomothetic psychology looks for general laws that can be applied to many different people, such as the factor of sensing, or the trait of openness.

Personality is thought to be determined largely by both genetics and nature, by environment and experiences, or by combination of the two. There is evidence for all possibilities. Modern research suggests that most personality traits are based on the influence of both nature and nurture.

The nomothetic approach in regard to the nature-nurture debate assumes that personality is mainly inherited, as opposed to being nurtured. The approach involves the study of types or traits of one’s individual in personality research and assessment.

A trait is a repetitive pattern such as always being untidy or late. Theorists generally assume that traits are fairly stable over time, and that traits are different among individuals.

A type is defined by the dominant preference. People are either extrovert or introvert. The two traits are discontinuous, i.

e. there is no in between. This means people may be extrovert or introvert on a continuous scale. The idea is that we all possess personality traits in pairs of opposite characteristics.

The nomothetic approach sees people as unique in their combination of traits, only within a certain paradigm. People differ only on the amount they have on each trait. Basically everyone fits in within a certain set of traits but differ by measuring differently in each trait. The combination of the traits then come together to describe a personality.

Several trait theorists use the nomothetic approach. Hans Jurgen Eysenck (1916-1997) approach used the nomothetic approach. He believed that every individual possessed a number of identifiable traits. He came up with the main three factor model (P-E-N), the extraversion-introversion ‘E’ (sociability and unsociability) dimension and the neuroticism-stability ‘N’ (emotionally unstable and stable) dimension. He added the third dimension ‘P’ in the 1970’s this dimension was known as the psychoticism dimension. He believed that people with a high P had increased vulnerability to psychoses and schizophrenia.

Raymond Cattell came up with a trait theory known as the 16 Personality Factors (16PF). The big five personality traits are based on Cattell’s 16 PF. The 16PF Questionnaire is a self-report test that measures the sixteen personality dimensions.

Lewis Goldberg proposed a five-dimension personality model, nicknamed the “Big Five”: The Big Five consists of five main personality traits: openness, conscientiousness, extraversion, agreeableness and neuroticism (OCEAN). There are self question tests for the big five and once the tests are completed it gives the subject a score on each of the big five traits. The Big Five test also goes in line with the nomothetic approach in the sense that it is a quick self test questionnaire which is quantitative. Each answer made in the test is a closed answer so the manager can expect answers to be within a certain paradigm as opposed to an open questions test where the subject can give any random answer that the manager is not expecting.

The nomothetic approach is also dominant in Type theories such as the Jung personality type theory. The theory was founded by Jung in his book psychological types, which was published in 1921. Isabel Myers and her mother Katharine C. Briggs developed a personality type test by constructing the Myers-Briggs Type Indicator (MBTI) based on Jung’s theory. The original theory consists of three functions, the introversion – extroversion function, the sensing – intuition function and the thinking – feeling function. Isabel Myers Katharine Briggs added a fourth function: perceiving – judging. This MBTI type model is different from trait models because the MBTI tells us that a person is either one type or the other. There are no in betweens like there is in trait theories. Type theories go in line with the nomothetic approach because it is possible to compare results with others.

Some managers may argue that there is more to personality assessment than the nomothetic approach, not everything is as straight forward as it seems. This is because theorists/scientists believe that not everyone’s personality is within a certain dimension and cannot be regarded as a straight set of traits. Some theorists tend to argue that not everyone are related to the big five and in extreme cases some people may not even have personality traits within the big five!Theorists and managers who back the nomothetic approach believe that with the results of the self-report questionnaires it is possible to generalise the results they get. Meaning that when a manager has so many results of the test he then could discover what is the ‘norm’ by averaging the scores and then use it to determine if future employees have the necessary traits required for the job. Mangers may also argue that this approach is in line with traditional scientific approaches that have been around for generations.

The nomothetic approach has been criticised by various theorists because they believe it is a quick and cheap approach towards personality testing without any real in-depth grasp of the actual personality of the individual. There are alternative approaches to the nomothetic approach, the main one being the idiographic approach. The main aspect of the idiographic approach is that it does not look at a group of individuals but at an individual to study their uniqueness and life experiences regardless of the others. Idiographic psychology is an attempt to understand the unique aspects of a particular individual.

The idiographic approach may be criticised by theorists and managers who follow the nomothetic approach because ideographic methods are often non-standardised making replication difficult or impossible. On the other hand some business managers may prefer the idiographic approach because case study methods capture and describe changes that happen over a period of time rather than taking a present ‘snapshot’. Regardless of criticisms the nomothetic approach may be preferred by managers because as mentioned before it is quick, straight to the point, easy to generalise, easy to replicate and standardised. They can study employees and see if they are suitable because the self-report questionnaire is compared to “the right employee”.

I believe the nomothetic approach might be useful to managers from developing countries such as China and India. This may be because of the rapidly growing demand for labour in secondary and tertiary sectors where managers may need to have a quick and low cost way of selecting and employing workers. In certain type of societies where there is relatively high demand for professional workers (e.g. Manhattan, City of London) businesses are able to spend more time and focus on every interviewee, the idiographic approach towards personality assessment may be used alongside the nomothetic approach. Some managers may even disregard both approaches and use their own approach since they both have their disadvantages. Their own approach could be using their own methods towards personality assessment; they could even come up with their own theories.

The Nomothetic Approach in Personality Testing. (2016, Jul 31). Retrieved from https://studymoose.com/the-nomothetic-approach-in-personality-testing-essay 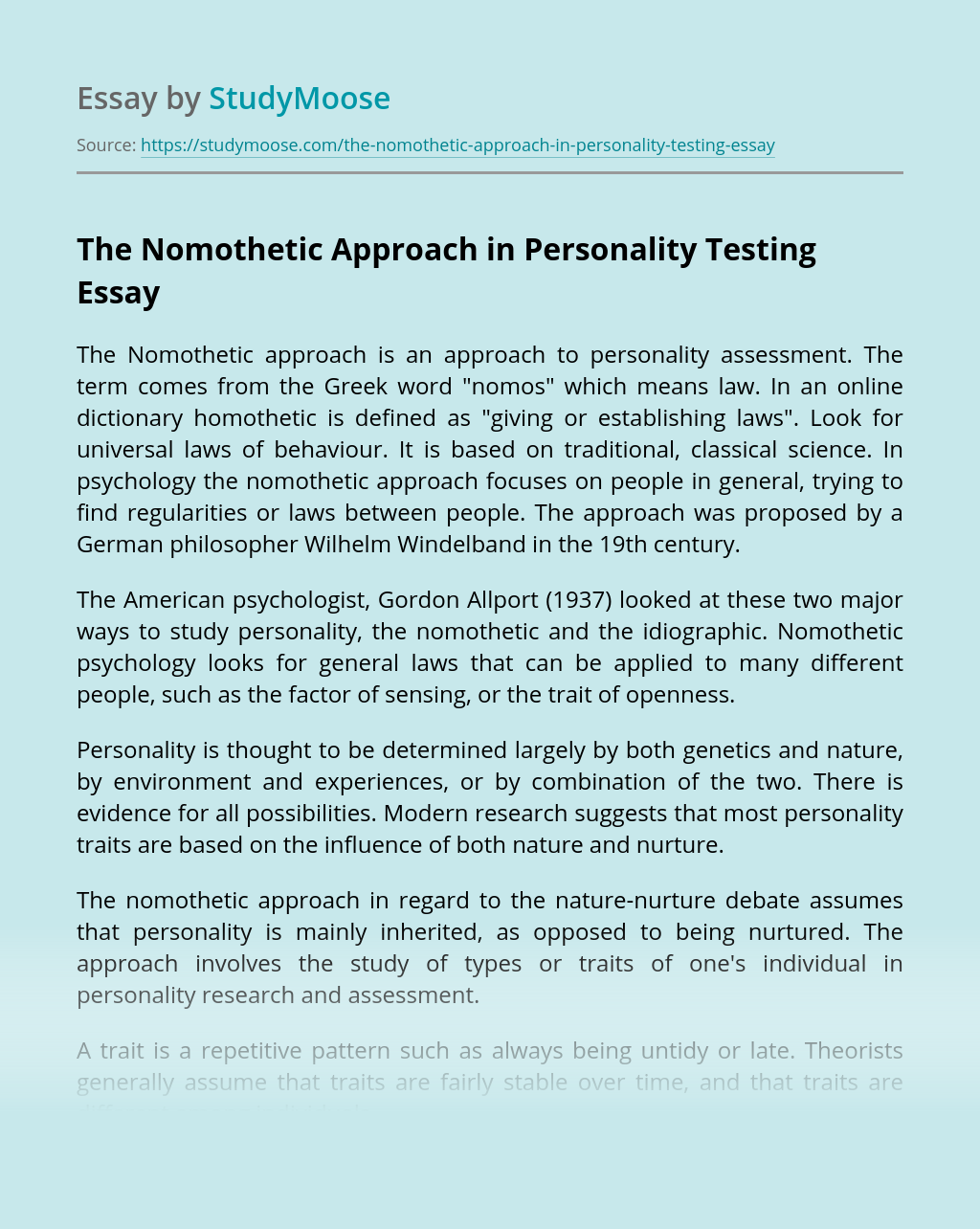