A Balance Between Nomothetic and Idiographic Approaches

The idiographic and nomothetic approaches in psychology are often regarded as representing opposing and conflicting positions about how best to study people, especially intelligence and personality. However, the two may be seen as complementary, with both necessary to gain a fuller understanding of human beings. The idiographic approach focuses on: ‘the individual and recognises the uniqueness of the person in terms of their experiences, feelings, developmental history, aspirations and motivations in life, and the values and moral codes by which they live’.

Turn in your highest-quality paper
Get a qualified writer to help you with
“ A Balance Between Nomothetic and Idiographic Approaches ”
Get high-quality paper
NEW! AI matching with writers

The word idiograph comes from the Greek word idios, meaning ‘own’ or ‘private’.

The humanistic perspective in psychology perhaps best exemplifies the idiographic approach. Freudian psychoanalysis can also be said to adopt an idiographic approach as he did not use any scientific method to test or find evidence for his theoretical claims. Approach The nomothetic approach in psychology focuses on: ‘similarities between people and attempts to establish general laws of behaviour and thought that can be applied to large populations of people, or indeed to all people’ The word nomothetic comes from Greek words nomos, meaning ‘law’.

Freud believed these were applicable to all and the theory is nomothetic in this respect. Background Humanistic psychology adopt a more idiographic approach, seeking the more unique aspects of individuals, rather than producing generalised laws of behaviour that apply to everyone. It highlighted the value of more individualistic and idiographic methods of study, particularly in areas of personality and abnormalities. Classification manuals like the DSM-IV, which lists the essential behavioural criteria of diagnosing autism, adopts a nomothetic approach and classify people according to particular type of disorders.

Traditionally, the idiographic and nomothetic approaches are seen as conflicting, with the implication that as a psychologist you can only operate from one of these positions. Cronbach (1957) identified this potential source of conflict between psychologists about how best to study the nature of what it is to be human. If the psychologist seeks to develop theories that apply to large populations then the nomothetic approach is preferable. If, however, the psychologist is interested in the uniqueness of a person, then the idiographic approach is the one to adopt.

The idiographic approach is often regarded as non-scientific, as subjective experience cannot be empirically tested and it is difficult to generalise from detailed subjective knowledge about a person. Some psychologists argue that scientific principles can be applied to study the uniqueness of individuals and the norms and rules by which a specific person operates can be identified. The idiographic approach can be used to study topics such as privation which are relatively rare and depends upon the circumstances surrounding the individual.

Most evidence for effects of privation has come from case studies of children who have been raised in conditions of neglect. The case of Genie (Curtiss, 1977) suggests that severe privation has permanent effects. At the age of 13 years she was unable to speak, physically underdeveloped and showed inappropriate emotional responses. Despite fostering and intellectual stimulation, Genie apparently never recovered from her years of privation, although there was a suggestion that other factors may have contributed to her problems.

Koluchova’s longitudinal study followed the long-term development of twin boys who had suffered severe privation in early childhood showed that children who have experienced severe privation seem able to overcome the effects of their early suffering with appropriate treatment and care. As such the nomothetic approach would be unsuitable and unable to gather any information which would contribute towards our understanding of the topic. The two approaches can be complementary as the idiographic approach can shed further light on a general law of behaviour established through a nomothetic approach.

Idiographic research may disprove a general law of behaviour. For example nomothetic research supported the idea of a multi-store model of memory with information flowing through the STM to LTM. However case studies of patients with brain damage suggest that the multi-store model is over-simplified. A patient known as KF suffered brain damage following a motorcycle accident, and underwent brain surgery. Some years later he was found to have normal LTM storage but an STM capacity of only two items.

If STM was necessary for the transfer of information to LTM, then KF’s LTM should also be affected. As a consequence, further models of memory have been proposed and tested. On the other hand, idiographic findings can lead to large scale research. Piaget used the idiographic approach gaining rich and detailed information about the development of his own children’s thinking. These finding inspired further nomothetic research and theories into cognitive development were developed. Scientific approach

Both approaches can contribute to the scientific approach – the aim of science are to “understand and describe” which corresponds to the idiographic approach and to “predict and control” which corresponds to the nomothetic approach. The nomothetic approach generalise findings e. g. in terms of the primacy and recency effects, more words are recalled from the beginning and the end of the list, irrespective of the length of the list. However an idiographic approach could be used to find the different techniques that people have used to recall the items

In contemporary psychology, the idiographic-nomothetic debate is still an important distinction. Attempts have been made to bring the two approaches together in an interactionist model (Bandura, 1986), but no influential solution has been found. It could be argued that the strengths of one approach compensate for the limitations of the other and so both approaches are needed for a complete study of psychology. The nomothetic approach has helped psychology to become scientific by developing laws and theories of human behaviour that can be empirically tested.

This approach attempts to determine laws and common characteristics for all people or large groups of people in a culture. It also helps to combine biological and social aspects of a person. However, the focus on general laws and theories neglects the subjective and unique experiences of the person. The extensive use of controlled laboratory experiment means that there is a problem of generalisation to everyday life. Some psychologists also argued that this approach overemphasises the similarities between people and gives little attention to differences.

Alternatively, the idiographic approach focuses on the subjective experiences of the person making the individual feeling valued and unique. Each person is valued as an individual rather than seen as one amongst many. Conclusion This approach provides detailed psychohistories and attempts to understand the many influences on how they come to be as they are. Humanistic psychology uses an idiographic approach to enable people to develop their full potential. However, this approach largely neglects biological, especially genetic influences.

A Balance Between Nomothetic and Idiographic Approaches. (2016, Nov 11). Retrieved from http://studymoose.com/a-balance-between-nomothetic-and-idiographic-approaches-essay 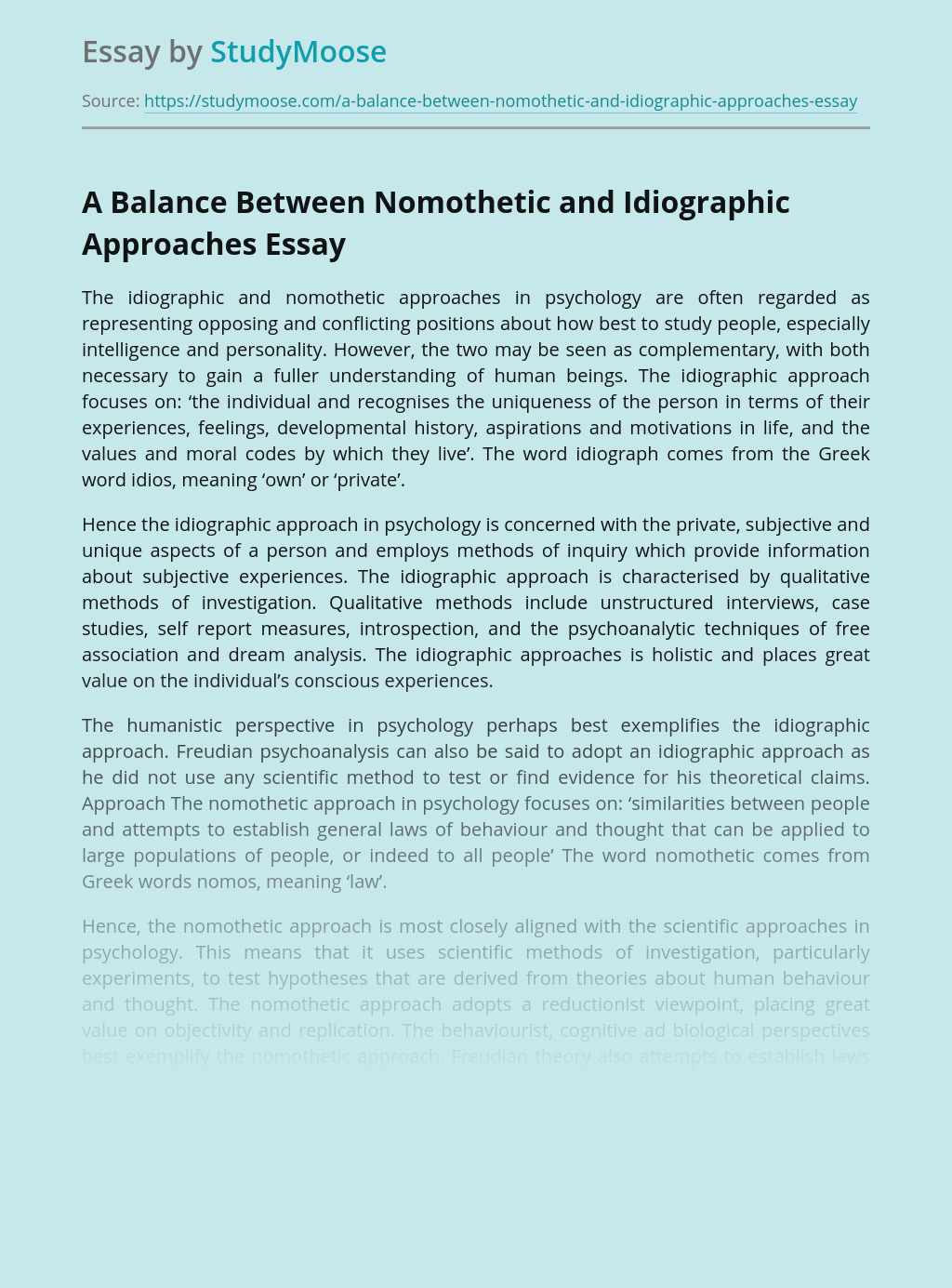 Turn in your highest-quality paper
Get a qualified writer to help you with
“ A Balance Between Nomothetic and Idiographic Approaches ”
Get high-quality paper
Helping students since 2015
Stay Safe, Stay Original