The New Nepal: Path to Development and Success

Nepal was declared Federal Democratic Republic country on 15th Jestha, 2065 B. S. After the mass movement II, the autocratic monarchy has been removed from Nepal. The new concept of new Nepal is to divide the country into different autonomous states with their own power and to be controlled by the central government. Everyone believes that this system will lead Nepal towards the path of development and success. This division of state will encourage decentralization of power and facility. The power will be equally divided to the state government.

Don't use plagiarized sources. Get your custom essay on
“ The New Nepal: Path to Development and Success ”
Get custom paper
NEW! smart matching with writer

People believe that New Nepal will run according to mandate of the mass movement II. All the wants demanded in the revolution will be fulfilled in New Nepal. Free education, free primary health services and many other helps will be provided by the government. Right to security of life, right to freedom, right towards own identity will be guaranteed in New Nepal. In New Nepal, people expect that all social evils will be abolished. There would be no discrimination on the basis of sex, caste, religion, class, etc.

All people would equal rights and facilities. But, it has been 4 years that Nepal has been declared federal democratic republic country, and, till now the main objective of the mass movement II to make the constitution, has not been fulfilled. Recently, the constitutional council has been dismissed. Due to various reasons, Nepal has not been able to establish federal system. Nepal has been undergoing a very critical political crisis. Leaders don’t seem to be devoted for the nation.

They are led by party carders and they speak only for their own favor. Corruptions, unstable government, monopoly for power, different ideologies of different political parties are some of the causes for the failure to establish federal system. In order to solve these problems, we the citizen should take steps as soon as possible. More organizations like CIAA (Commission for Investigation for Abuse of Authority) should be established to abolish corruption.

Election should be held and we should choose the right leaders for the smooth running of government. This will solve the problem of unstable government and monopoly for power. Development of New Nepal is only possible if there is establishment of federal system and political stability in the country. The government should run according to the mandate of the Jana Andolan II. We, the citizen, should pressurize the government to function properly. The problems like corruption, unstable government, etc. must be solved as soon as possible.

The New Nepal: Path to Development and Success. (2016, Nov 15). Retrieved from https://studymoose.com/the-new-nepal-path-to-development-and-success-essay 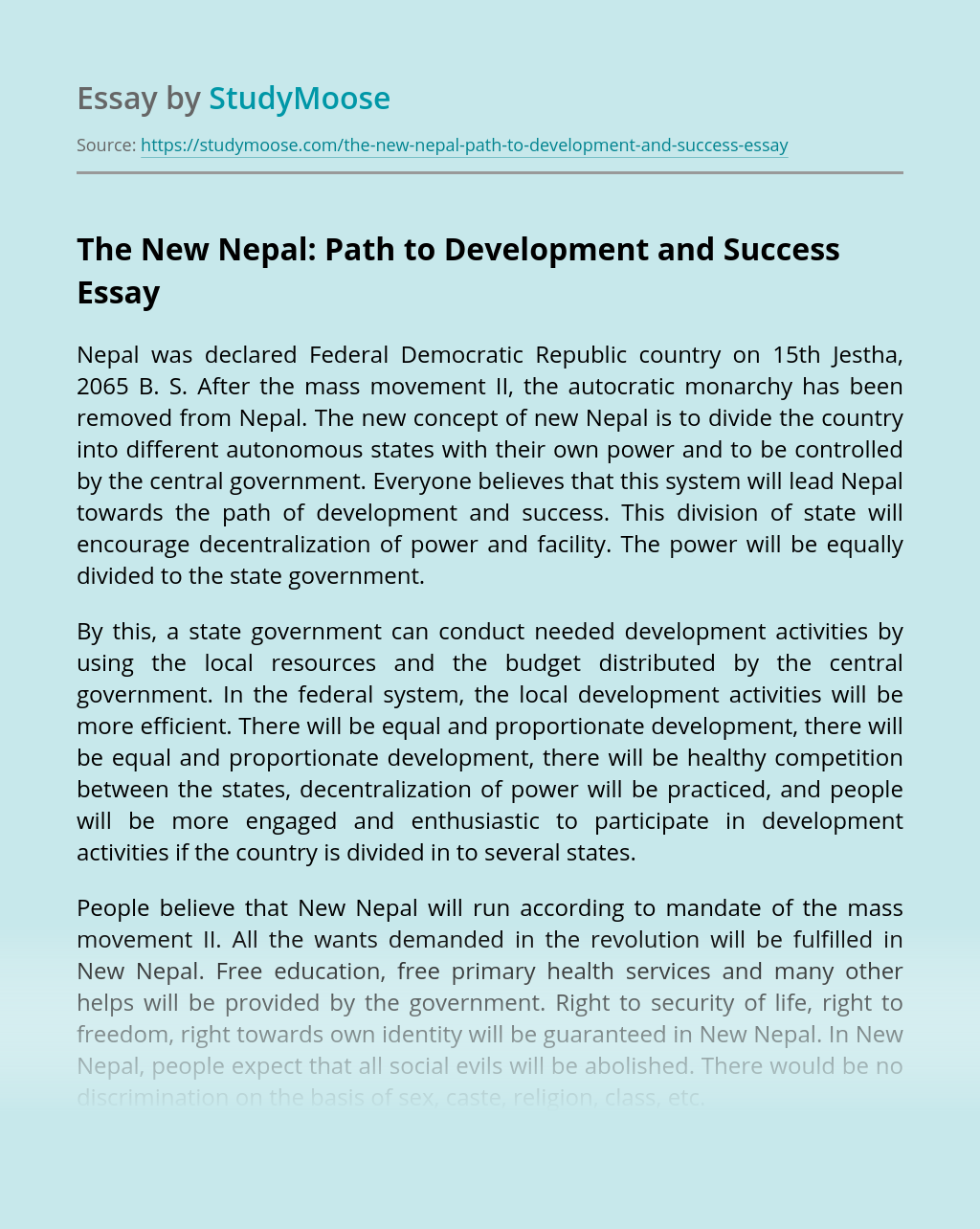