The Most Dangerous Game: Character Analysis of General Zaroff

?General Zaroff’s refined emotions conceal a disturbing desire to inflict suffering and death for his own amusement. In many ways, Zaroff considers himself a god who can go about life as he pleases. Zaroffs’s madness stems from a life of wealth, luxury, and militarism, which inflate his ego and sense of entitlement and impose few limits on his desires. Zaroff began hunting at an early age when he shot his father’s prized turkeys and continually sought out bigger game in his family’s tract of wilderness in the Crimea, a peninsula on the Black Sea.

Don't use plagiarized sources. Get your custom essay on
“ The Most Dangerous Game: Character Analysis of General Zaroff ”
Get custom paper
NEW! smart matching with writer

Commanding a division of Cossack cavalrymen in Russia, meanwhile, familiarized Zaroff with the horrors and atrocities of warfare. He continued to hunt after the czar had fallen when he came to America. He eventually tired of hunting animals and claimed it was no longer a challenge but a “mathematical certainty”. He decided he had to do something to keep from “going to pieces”.

His bloodlust and passion for hunting eventually prompted him to hunt men, the most cunning and challenging prey he could find.

Accustomed to death, General Zaroff has lost the ability to distinguish men from beasts, suggesting that he has slipped into barbarism and lost his humanity. The sanctioned violence of his youth and early manhood drained the general of his empathy and capacity to make moral judgments. His passion for the hunt and love of the refined, meanwhile, led him to devalue human life. In fact, Zaroff even praises his thoroughbred hounds over the lives of the sailors he hunts.

Straight from the text, “I hunt the scum of the earth: sailors from tramp ships–lassars, blacks, Chinese, whites, mongrels–a thoroughbred horse or hound is worth more than a score of them. ” He has strayed so far from any ethics that he believes that his hunting dogs are more important than what he considers “scum of the Earth”, or minorities. The only reason he praises his dogs so is because he uses them to hunt men.

Connell describes Zaroff’s sharp pointed teeth and smacking red lips to dehumanize him and highlight his predatory nature. Ironically, Rainsford discovers that General Zaroff is far more repulsive than the “scum” he disdainfully hunts, devoid of all emotion and humanity despite his seeming gentility. At the end, the real question: is Zaroff a hunter or a killer? Zaroff himself clearly believes himself to be a hunter, as he thinks that minorities have no value and can therefore be hunted.

Rainsford on the other hand thinks that Zaroff is a cold-blooded murder. I personally agree with Rainsford. Zaroff claims that he hunts men to get away from the “mathematical certainty” that he supposedly has against any quarry he would usually hunt. However, when he hunts men, he gives them just a knife. Meanwhile, Zaroff is equipped with any hunting rifle of his choice, as he is very wealthy, his hunting dogs, his living tank Ivan, and just about any other thing he could think he may need.

This gives Zaroff an extremely unfair advantage over the man he is hunting. I think that while he is trying to take away the “mathematical certainty” of always catching his quarry, he has just walked in a circle. It is nearly impossible to stay alive with nothing but a hunting knife against Zaroff’s arsenal of guns, dogs, and his Cossack Servant. When you look at all the details and fine print, Zaroff is no hunter. He is a cold-blooded killer.

The Most Dangerous Game: Character Analysis of General Zaroff. (2016, Jul 28). Retrieved from https://studymoose.com/the-most-dangerous-game-character-analysis-of-general-zaroff-essay 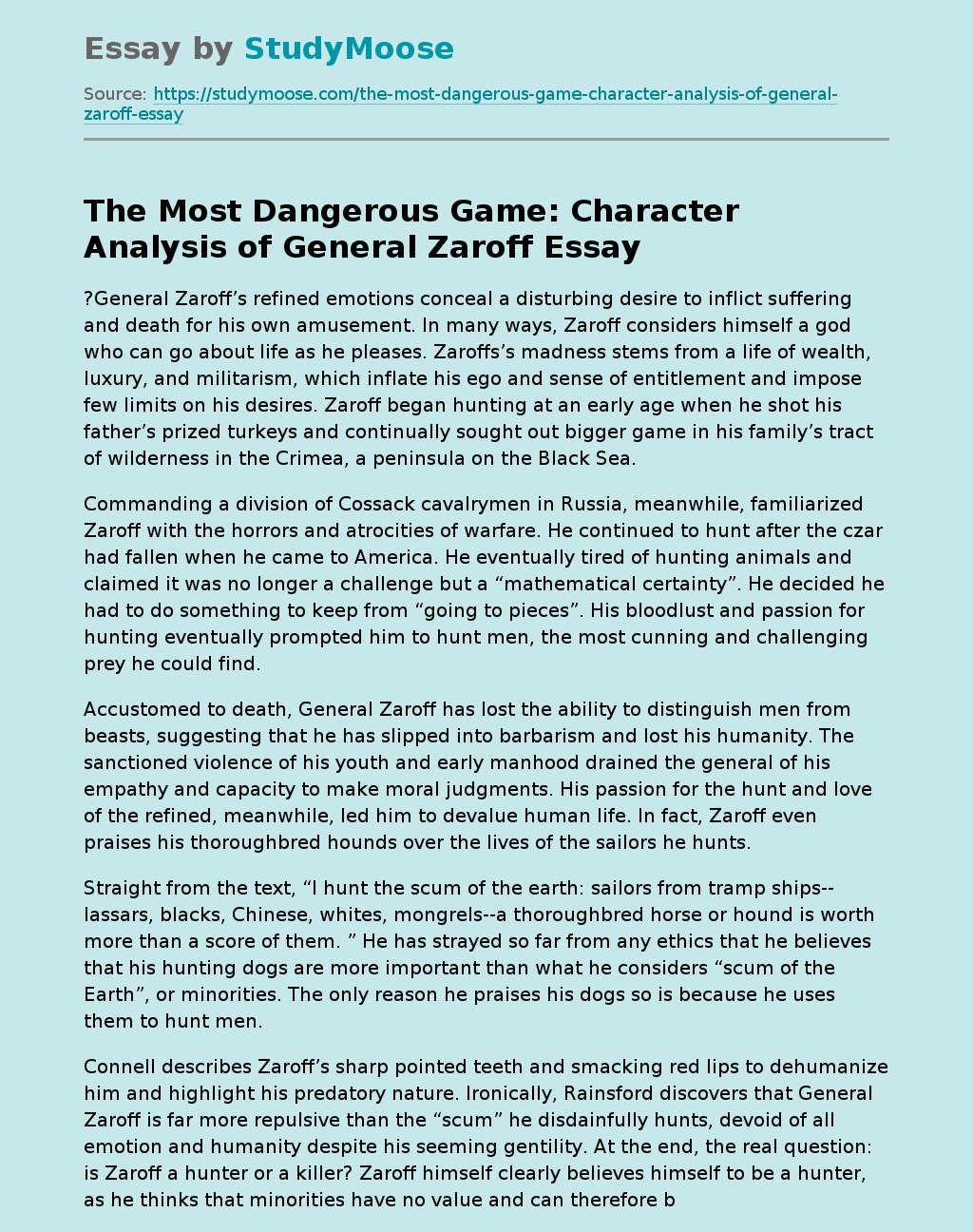