The Mobile Phone: A Blessing or a Curse

From the eighteen hundreds to the present day, mankind has made many inventions: the television, radio, digital watches, and more recently home computers. Now, in the twenty first century a new invention has become one of the most widely used forms of communication in the world today. This of course is the mobile phone. Although available in the nineteen eighties and nineteen nineties it did not become as popular as first expected. Mainly due to the fact that they were very big, very expensive, and limited in technology.

Turn in your highest-quality paper
Get a qualified writer to help you with
“ The Mobile Phone: A Blessing or a Curse ”
Get high-quality paper
NEW! AI matching with writer

However, nowadays mobile phone technology has improved so much that you can get mobile phones that are the size of your finger.

Some also have a facility for games on them, and some even have access to the Internet. Also, the newest mobile phones have a picture messaging facility on them, which allow you to take and send pictures to other mobile phones. Although all these technological advances have made the mobile phone one of the most superior communication devices in the world, how are they viewed in every day society? To some they are blessings from the heavens, and to some they are curse of the earth.

So to what extent is it a blessing from god, or the curse of the earth?

The main reason the mobile phone is used for is for social purposes amongst friends. It is mainly used for this because you can contact anyone you know at anytime of day, and from anywhere in the world. They are also an essential tool for the business market.

Some businesses are now so dependant on them that they now provide its manager’s with mobile phones. My Dad for example, he gets a company phone, and every time he breaks it he gets a new one. They have become more widely used in business because more and more large co operations have expanded across the country, and overseas, and the mobile phone allows the boss of the company to check what is happening in each branch of their company. Also, if you work as a stock broker you can check how your stock is doing while you are walking down the street, by using an internet connected mobile phone. They have also become much easier to buy.

For example, it is now possible to buy mobile phones from supermarkets, not only out of specialist shops. Due to this mobile phones have become available to levels of society, and ultimately increasing the amount of mobile phone users. They can also be very useful in cases of emergency. For example, if your car broke down and you had no mobile phone you couldn’t phone the AA to ask them to come and help you, instead you would have to maybe walk half a mile to find the nearest AA phone. They are now also being made very small. The fact they are now being made smaller is very good because back in the nineteen eighties they were about the size of a brick, and they couldn’t really be carried around. Where-as nowadays, they make them so small they can fit into your pockets.

Mobile phones can also pose many problems to society and law enforcement. They can be problem to the law because of prank calls. Prank calls can cause many problems when they are made from mobile phones. For example, if a prank call is made from a house phone it is easy to trace because the police can just trace the number and go to the house. However, if the call is made from a mobile phone the police could trace the number and find out where the call was made from. Although they know where the call was made from it would be very difficult to find the person because they could have moved from the place where they made the call, and then the police would have to go round that neighborhood and ask who has a phone and there would not be very many people who don’t have a mobile phone. They are also serious health risks. Scientific research has know shown that mobile phones can cause brain tumours from the amount of radiation that they produce.

It was then later thought that the head set that you can buy to go with the mobile phone reduces the amount of radiation that the phone produces, when in actual fact it doubles the amount of radiation. The newest mobile phones that have the picture messaging facility are a complete rip-off, because to be able to send them you have to know someone that has a picture messaging mobile phone, so you can actually send your pictures. So it means that you and you’re friend will have to spend an awful lot of money to get two phones. Also, the mobile phone masts that are being put up everywhere are destroying the countryside.

They are destroying the views of the countryside, because on top of almost every hill there has been a mobile phone mast put up. The phone masts are also carcinogenic. This means that they emit radiation and can cause cancer. They are also becoming a nuisance in schools. They are becoming a nuisance in schools because some pupils do not turn their phones off in class, and they can then ring, and cause the teacher to become distracted and the class will be disrupted.

Overall, I believe that the mobile phone is a curse. My reasons are that it is a nuisance to the police for prank calls, it is a health risk, some of the ideas are rip-offs, and they also destroy nature

The Mobile Phone: A Blessing or a Curse. (2016, Jun 04). Retrieved from https://studymoose.com/the-mobile-phone-a-blessing-or-a-curse-essay 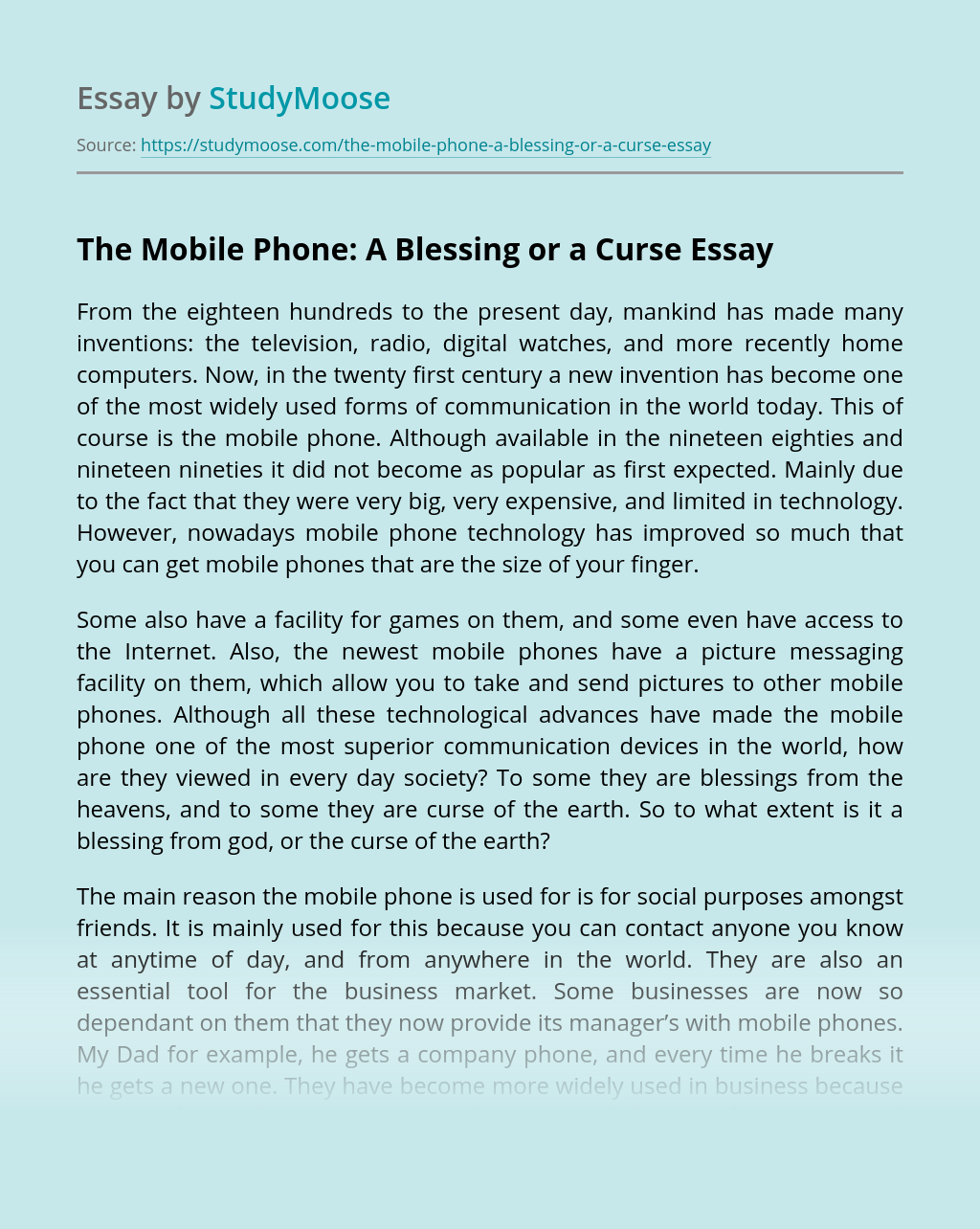 Turn in your highest-quality paper
Get a qualified writer to help you with
“ The Mobile Phone: A Blessing or a Curse ”
Get high-quality paper
Helping students since 2015
Stay Safe, Stay Original