The Main Characters in the Paradise Lost

Where does a man go after he dies? That’s the question I was all wondering. John Milton writes the book “Paradise Lost”. The main characters of the tale are God, Son of God, the Devil, Raphael, Michael, Eve, and Adam. Hell is where the tale starts in which Satan as well as his supporters. Where they had a battle with God and now are trying to recover from defeat. Pandemonium is a palace where the councils come together to decide if they should return to battle.

Don't use plagiarized sources. Get your custom essay on
“ The Main Characters in the Paradise Lost ”
Get custom paper
NEW! smart matching with writer

The council decides that they want to explore the new world where prophesied is to be created. This makes it safer so they can create a plan for revenge. Satan takes it upon himself to work on this mission alone. When he gets to the gate of hell, he runs into Sin and death, who let him pass. Satan then journeys until he sees Heaven a new universe that is floating. Satan is spotted to be God and tells the tale of the fall of man.

God’s Son, who at the time sits to the right of him, he offers to sacrifice himself for man. While Satan enters into the new universe. Satan then flies towards the sun, where he meets the angel Uriel, and tricks him into how man’s home is run. What does Milton’s Paradise Lost say about man’s nature, why man is here, and where man is going after death.

In this paragraph, I will be discussing what Milton says about man’s nature.

It’s the start of the story. The narrator/Milton is talking in this part of the story. It’s at the beginning of the story where the narrator is talking. He is talking about man. “Of man’s first disobedience, and the fruit, Of that forbidden Tree, whose mortal taste… I may assert eternal providence, and justify the ways of God to me” . My analysis is Milton recounting the fall of man. This proves my thesis because it tells about man’s nature.

In this paragraph, I will be discussing why man is here. God is talking to his son and others about the fall of mankind. And why they are here. God is talking in this part of the story. God had spotted Satan getting through into the new world and speaks about the fall of mankind. “Sole pledge of his obedience: so, will fall He and his faithless progeny: whose fault? Whose but his own? Ingrate he, had of me All he could have: I made him just and right, Sufficient to have stood, though free to fall” . My analysis of this quote is even through man is obedient he will still fall. But it’s not at all of his own faults. This proves my thesis because this is why man is here. Man is here because they get the choice between right and wrong. And even though they fall they will still be welcomed by God.

In the last paragraph, I will be discussing where man is going after death. God is talking to his people about man’s sins and the destruction of mankind. I believe that God is talking in this part. God is talking to his people about the fall of mankind. As well as the death of mankind as well. “Die he or justice must; unless for him, some other able, and as willing, pay, The rigid satisfaction, death for death” (Book-3, Lines 210-213). My analysis of this quote is that to help with justice, death is the only way. If God lets man/ Adam go then it wouldn’t be fair. If mankind doesn’t pay for in death than justice may die. God reveals in this that all sins have consequences. This proves my thesis because it tells us where man is going after death.

In conclusion, what Milton says about ma’s nature is true. As well as to why man is here. And where man is going after death.

The Main Characters in the Paradise Lost. (2021, Apr 23). Retrieved from https://studymoose.com/the-main-characters-in-the-paradise-lost-essay 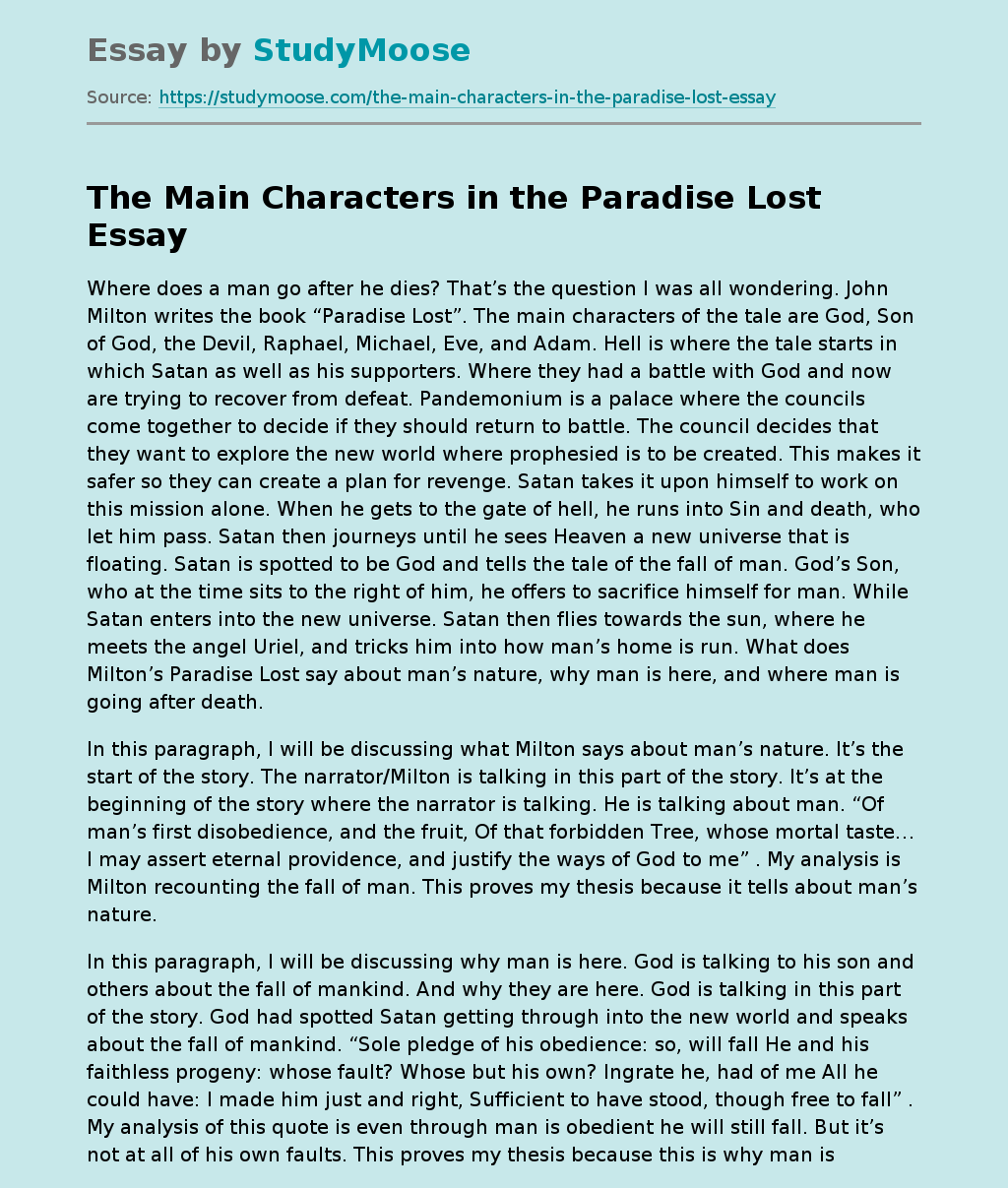