The Lord of the Rings

To begin describing my unlikely hero’s we first have to ask ourselves what makes a hero. Is it always a big, strong alpha male with a square jaw and cocky attitude? I hardly think so. I feel that a hero is someone who puts others needs in front of their own to complete whatever task is set before them, even though they may have to give their life in the process, they keep going. Once in a while you come across a story where the hero not only does not fit into the stereotypical hero status but is as far away from what you expect as you can get.

Don't use plagiarized sources. Get your custom essay on
“ The Lord of the Rings ”
Get custom paper
NEW! smart matching with writer

He just knows that something has to be done. The odds are usually greatly in favor of the villains and there is much to overcome, both mentally and psychically. My unlikely heroes are Frodo from the Lord of the Rings (Tolkien) and Pug from the Riftwar Saga.

Both of these unlikely heroes must overcome great odds to complete quests that are thrust upon them. One, a small hobbit with little knowledge of the world outside of his home in the Shire, the other, a small orphan boy from the rustic town of castle Crydee.

Neither is aware of the dangers that await them or that their lives are about to change forever. Frodo Baggins is a hobbit. Hobbits are short and stocky and do not go out very often. Life outside the Shire does not concern them too much and they are very content on staying on their own land doing what pleases them.

Frodo lives with his uncle Bilbo in his hobbit hole Bags End, a house carved into the side of a hill. Frodo is usually quiet and reserved and does not like to cause a scene. (Tolkien) While living with his uncle Bilbo, Frodo is left in the Shire as heir to Bags End and all of the possessions. This included a magic ring. All Bilbo knew about the ring is that it turned the wearer invisible; the true nature of the ring had become lost to history. After keeping the ring hidden for 17 years the wizard Gandalf came to Frodo to tell him that it is The One Ring of the Dark Lord Sauron and that his agents are searching for it.

Gandalf informs Fordo he must take the ring to Rivendell, home of the house of Elrond, an elf lord in order to keep it out of the hands of the Nazgul, Sauron’s agents. (Tolkien) At the start of his journey Frodo is joined by his friend and gardener Samwise Gamgee, and his cousins Meriadoc Brandybuck and Peregrin Took. They leave the shire for Rivendell and almost instantly they are tracked by the Nazgul, barely escaping. They make it to an inn in the town of Bree where they are joined by Aragorn who helps them escape their next attack and guide them to Rivendell.

Once in Rivendell there is a meeting on what to do about the ring. There are representatives from each race at the meeting. They come to the conclusion that the ring is to be destroyed but an argument ensues on who will take possession of it to destroy it. Then Frodo volunteers for the task and everyone else takes an oath to protect him on his journey to Mordor to destroy the ring in the fires of Mount Doom. (Tolkien) There are many things that Frodo must overcome in order to complete his task. The ring drives the humans around it mad and they will eventually try to kill Frodo for it.

Frodo is also hunted at every turn by Orcs and every other being that Sauron has under his control. Frodo eventually has to leave all of his companions behind with the exception of Sam in order to protect the ring from those that wish to use the rings power. Frodo and Sam made their way through Emyn Muil, followed by the creature Gollum. As they finally reached Mount Doom, Gollum reappeared and attacked Frodo, who beat him back. He continued on while Sam fought with Gollum. Having finally reached the Sammath Naur, or Crack of Doom, however, Frodo lost the will to destroy the Ring, and instead put it on, claiming it for himself.

Gollum got past Sam and attacked the invisible Frodo, biting off his finger, and finally regained his “precious”. As he danced around in elation, Gollum lost his balance and fell with the Ring into the lava. The Ring was thus destroyed, Sauron’s power lost and his realm ended. Frodo and Sam were rescued by Great Eagles as Mount Doom erupted. (Tolkien) Pug is the child of unknown parents, an orphan abandoned at a monastery near Crydee, a town on the north-west coast of the Kingdom of the Isles. As a boy, he is sent to Castle Crydee and is adopted by Megar, the castle keep’s cook.

He grows up there, becoming the closest friend of Megar’s son, Tomas, becoming almost a brother to him. While gathering shellfish at age 13, Pug is caught in a storm, his ankle is sprained, and he is charged by a wild boar. He is saved by a franklin named Meecham, who is in the service of the court Magician Kulgan. (Fiest) Kulgan discovers Pug’s talent for magic and takes him as his apprentice on Choosing Day. Under Kulgan’s tutelage, Pug makes satisfactory progress in the theory of magic, but finds himself unable to cast spells in the traditional way.

Pug appears to suffer some form of mental block. Kulgan decides that as a foil to Pug’s very logical mind, Pug is to be taught equestrian skills. This leads to Pug being selected to accompany Princess Carline (daughter of the Duke of Crydee) into the countryside on a ride. During the course of this ride, they are attacked by two trolls; Pug manages to defend the princess demonstrating skill first with a sling and then with his unexpected success in casting a spell, his first of any power. The spell causes the trolls excruciating pain and they drown.

Kulgan voices to Pug that this is a skill unheard of in Midkemian magic. Casting this particular spell without a device to focus the power was impossible. Casting the spell in the manner in which Pug did should have caused great pain to himself instead of the Trolls. Upon return to Crydee, Pug earns the gratitude of the Duke and the affection of Carline, Duke Borric’s beautiful, but willful, daughter. As a reward for this feat, Pug is made a squire and was granted land, to be held by the crown until the age of majority.

Then, mysteriously, the Tsurani invade Crydee. A bitter nine year war ensues at the start of which, Pug is captured while helping Kulgan get safely away from a skirmish and taken to Kelewan, kept at first as a swamp slave, cutting timber and pulp for the Tsurani. He is liberated from the swamps by Clan of Tsurani nobles, and instructed to tutor their sons in the ways of the Kingdom. Pug is respected but never allowed to forget that he is nothing but a slave.

During this time Pug meets and falls for Katala, a slave girl of great beauty and wit, and Laurie, a former Troubador from the Kingdom, most recently a friend and confidant of Pug. However, one day Pug’s former training is recognized by a Tsurani Great One. Pug is trained as a Greater Path Magician, and is remarkable in many ways. His outworld status (as well as his former status as slave, enemy and lesser path apprentice) makes him something of a celebrity. Pug is renamed Milamber. Fiest) Pug becomes instrumental in bringing the Riftwar to an end, by destroying the planetary rift between Kelewan and Midkemia, in an effort to stop the return of the enemy to Midkemia.

When the Riftwar ends, Pug is rewarded with the title to the island of Stardock, previously gifted to him by Duke Borric for saving his daughter. It is also revealed that after he had been considered dead, the Duke gave him a name in memorial, adopting him into the ConDoin family, effectively making him an adopted member of the royal family. Fiest) Midkemia is very similar to Earth in climate, and its flora and fauna. It has three continents: Triagia, Novindus and Winet. It has two oceans, though there are various names for them depending on the continent or nation. The Endless Sea is west of Triagia and is east of Novindus where it is called the Blue Sea. The Sea of Tears is east of Triagia and west of Novindus where it is called the Green Sea. (Fiest) Tolkien prepared several maps of Middle-earth and the regions of Middle-earth in which his stories took place.

Some were published in his lifetime, though some of the earliest maps were not published until after his death. The main maps were those published in The Hobbit, The Lord of the Rings, The Silmarillion, and Unfinished Tales. Most of the events of the First Age took place in the subcontinent Beleriand, which was later engulfed by the ocean at the end of the First Age; the Blue Mountains at the right edge of the map of Beleriand are the same Blue Mountains that appear on the extreme left of the map of Middle-earth described in the Second and Third Ages.

Tolkien’s map of Middle-earth, however, shows only a small part of the world; most of the vast lands of Rhun and Harad are not shown on the map, and there are also other continents. (Tolkien) The two unlikely heroes are a lot alike as well as being very different. Pug has many powers he can use later on in the books to help him do what needs to be done. Frodo just has his will and the help of Sam. No matter how hard things became, they both pressed on in order to save their world.

The Lord of the Rings. (2017, Mar 09). Retrieved from https://studymoose.com/the-lord-of-the-rings-essay 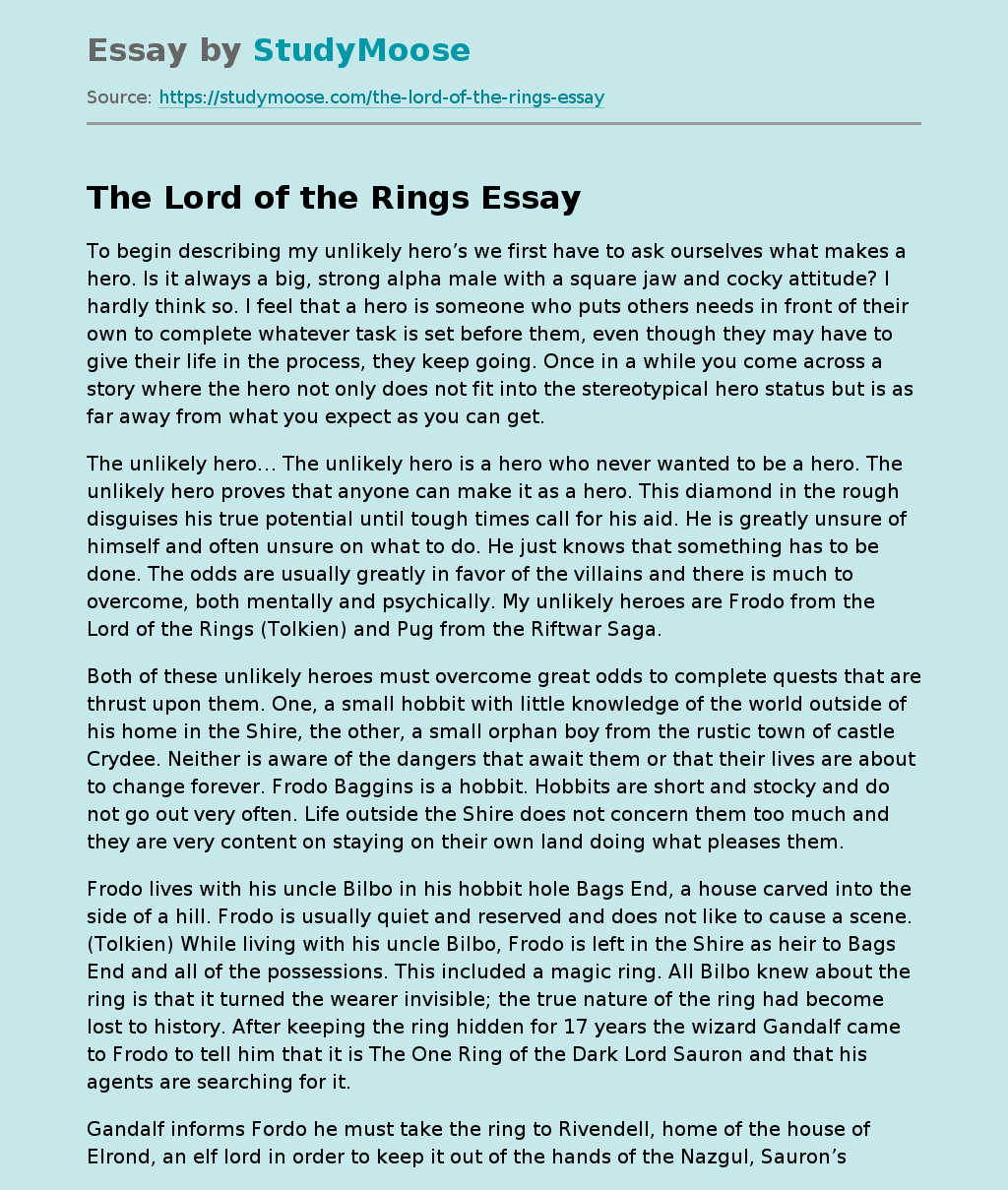