Kao Kalia Yang’s “The Latehomecomer” is a witness to the exodus of the culturally rich ethnic group known as the Hmong. She attempts to share the struggle, challenges and triumphs that her people, through her family, had to endure to attain peace and a stable life. The Hmong is an ethnic group who can be found in Vietnam, Thailand but mostly in Laos. They are a unique group since they have no written language but their culture is rich and colorful.

Don't use plagiarized sources. Get your custom essay on
“ The Latehomecomer Book Review ”
Get custom paper
NEW! smart matching with writer

Just looking at their traditional dresses, one can infer a people who are skilled but living a simple life, living off the land and nature.

Much more than just an autobiography, it is a testament to the indomitable will of man to rise up from the tragedy of the past, the challenges of the present and the promise of the future. However, Kao Kalia Yang paints the other picture of the Hmong people. A people who are embroiled in a war then disowned, which leads to them pulling off their roots from their land and escaping to keep their culture alive.

The book follows the family of Yang, since her birth in the Thai refugee camp to their exodus to the promise of America. The book presents the life changing and gut wrenching decisions that her family had to make to survive.

The book opens with a couple escaping in the Jungles of Laos and Vietnam. They are escaping from the revenge that the North Vietnamese soldiers are raining down on their people because of their group’s role in helping the Americans in the Vietnam War.

This couple is revealed to be Kao Kalia Yang’s parents. The decision to run is not easy for the couple as this would be the last time that Kao Kalia Yang’s mother would ever see her family. However, they would be separated as the men escape into the jungle and the women are arrested and confined to a prison camp.

This prison camp would be the birthplace of Kalia Kao Yang’s sister. The family is then reunited as the women escape and they cross the Mekong River and enter Thailand. Here, they stay in a refugee camp named Ban Vanai. This refugee camp would be the birthplace of the author. Here, she grows up unaware of the challenges that face her and her people. Another decision would then again make the family “escape”, but this time across Asia and into America. Thus, the family moves to a transition camp where they are taught to speak, read and write English.

Finally, her family is allowed to migrate to America to rebuild their lives. It is in America however, that Kao Kalia Yang experiences the uniqueness of her people. Thrust in to a new world that could have been another planet, Kao Kalia encounters barriers both in language and culture. Growing up as a child, she would whisper because she felt insecure with how her English sounded. Her family would also face enormous challenges in adapting to America, double jobs and meager salaries, compounded by the fact that Americans were largely ignorant of the Hmong and their fate.

Despite difficulties adapting to the western world, she and her family find a “home” that they can go back to, represented by her grandmother. The family matriarch would act as the roots of their family, invoking the spirits of their homeland, reminding them of the hardships that they faced and pushing them to attain a stable and secure life. Life was both tragic and triumphant for Kao Kalia Yang. The challenges she faced in adapting to life in America is being experienced by every immigrant boy and girl in the United States.

The insecurities of having a different culture, of knowing the fact that one is different among others and the barriers that immigrant children face are rife with stories of hardship and obstacles. But Kao Kalia Yang’s case is unique because unlike most immigrants, she and her people have no more country to call homeland. Laos have become a place of persecution and discrimination for Hmongs. This fact would push Kao Kalia and other immigrant Hmongs to strive and make their mark on their adopted country. The biggest challenge aside from finding a place to call “home”, was the absence of written language of the Hmongs.

Their culture was challenged by the westernization of their situation. That was why Kao Kalia dedicated the book to her grandmother because it was her that grounded her family to the history of their people. In the face of changing times, her grandmother reminded her that theirs was not a normal but blessed life. It would also lead Kao Kalia to found a company that helped immigrants in writing, translating and having a stable life in America. Though her story is unique, the Latehomecomer’s theme of journey, change and challenges is a theme that resonates with all of us.

All of us have experienced moving to another place and adjusting to new surroundings. It is always an experience that fills everyone with insecurities and sometimes dread. We ask ourselves whether we would fit in, or if we could ever regain the friends that we’ve lost when we were plucked from our former places. Although I still have a homeland to always refer to, I too sometimes ask myself questions that make me question who I really am. Questions that make me question my roots and reminisce about the experiences of my family.

The difference with Kao Kalia Yang and my experiences is her heritage and the tragic past of her people, but we both share the insecurities encountered in adapting and assimilating in new contexts. I was moved with the simplicity that she presented her family, and her people’s, great journey. I thought that in her effort to present the plight of the Hmongs, Kao Kalia Yang would glamorize their sufferings and magnify the difficulties they had to face in attaining a stable life. Instead, she practiced restraint and control.

The book was not looking for my sympathy vote in the plight of the Hmongs, but rather, it sought for my understanding of their situation. Although the story is very tragic, you cannot help but smile knowing that these people are doing everything they can to preserve their culture. It is a testament to the man’s will to protect his roots and to safeguard his beliefs in the face of dire consequences. Their experiences in escaping the dangers of Laos is harrowing and frightening. I cannot imagine the feeling of leaving everything you know and risking your life to survive.

I was appalled with the discrimination that the family experienced even in the refugee camps. Kao Kalia Yang’s experiences in assimilating into the America opened my eyes to the situation of immigrants anywhere. It must be very difficult to find a foothold in a culture that is both poles apart and ignorant of your ethnicity. I was actually rooting for her while reading the book, rooting for her family as they struggled to live up to the American dream. And I was deeply moved when I read about the funeral of her grandmother, the woman that kept them together, the character that epitomized the Hmong culture in the book.

It felt as if I too lost someone dear in my life. After reading the book, I was inspired to research about the Hmongs and where they are today. Although they still experience discrimination and hardships especially back in their country and the refugee camps, successful Hmongs such as Kao Kalia Yang have inspired most of them to excel in their own fields. In a December 1997 issue of local Wisconsin newspaper, Post-Crescent, they revealed that Hmong students in six Wisconsin public school districts, performed above average and excelled in their classes (Post-Crescent, 1997).

In 2002, Kaying Xiong-Vue became the first Hmong principal in Wisconsin (Lindsay, 2009). There are even Hmong rappers! They have even been featured in Grey’s Anatomy in the series’ Season 2 episode 5 (beehunie, 2006). The Latehomecomer is a must read not just for those who have been displaced from their homelands, either by tragedy, work or juts looking for better opportunities, but for everyone who is looking for inspiration in this fast paced world. The book is a beautiful reminder that even in the direst, saddest and worst situations, man will always prevail. 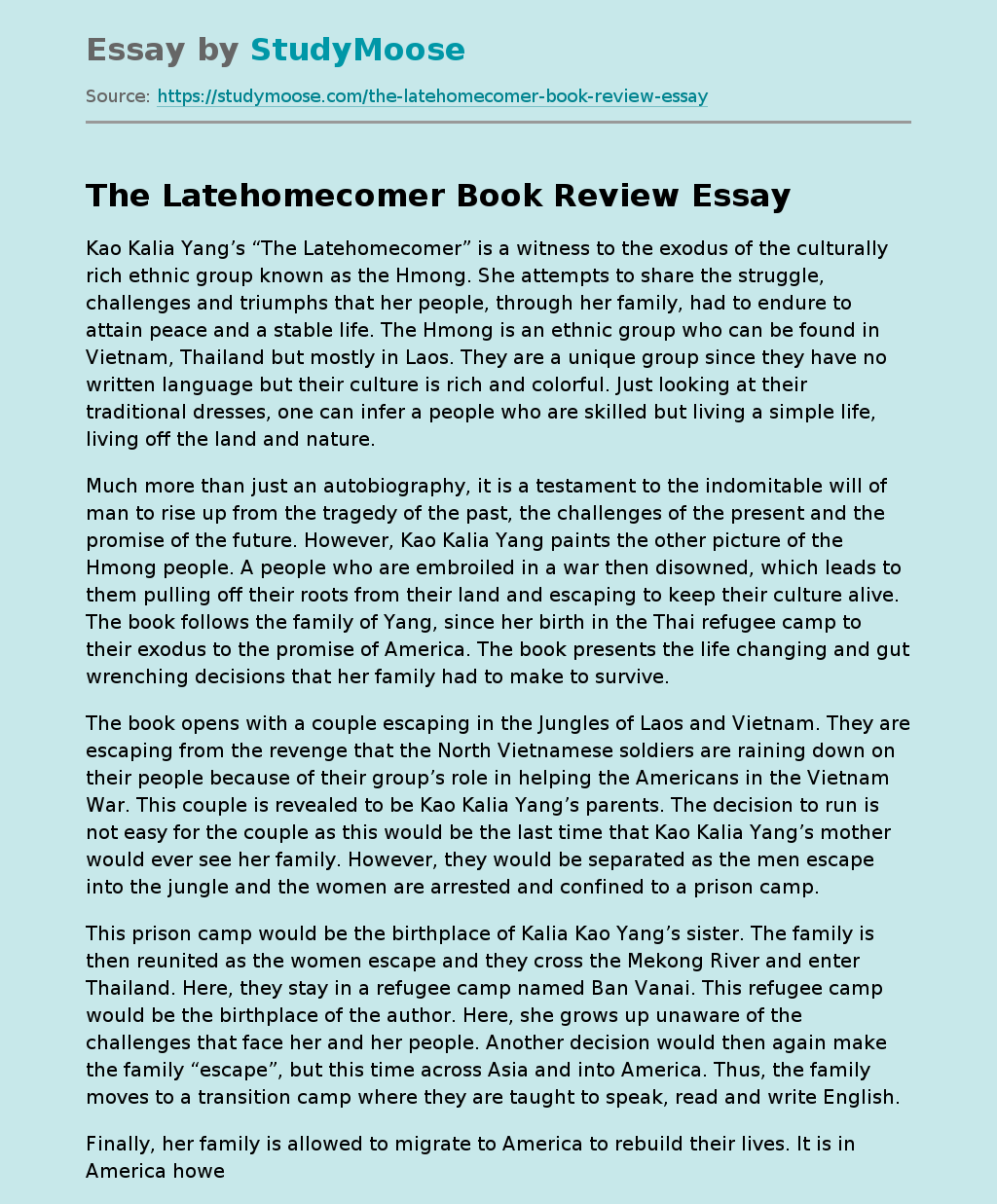