The Justinian Code as New Law in Rome

The Justinian Code came about when emperor Justinian, or Flavius Petrus Sabbatius Justinianus, decided to codify existing Roman Law, as well as add some of his own. This code had a great effect on the law of the land, and remains as the foundation of law in many western nations to this day. Despite it’s effects not being immediate, Justinians administrative genius helped to bring stability to the inconsistent law he inherited from Rome.

Don't use plagiarized sources.
Get Your Custom Essay on The Justinian Code as New Law in Rome Just from $13,9/Page

In 529 A.D. Tribonian, Justinian’s legal minister, led a group of scholars (probably monks) to compile all existing Roman law and rewrite it into something clearer and more absolute. They included not only the official Codex Theodosianus but also many private collections, be they from individual jurists or villages or cities. This is not to be confused with the private collections from which the Codex Theodosianus was itself based on, which were the Codex Gregorianus and the Codex Hermogenianus.

The compiling of laws took 14 months, and the Code made all previous case law from which it was derived no longer binding or viable precedent.

In 533 the Digest was written, and was a summary of the voluminous Code, as well as a guide for judges as to what precedent is to be enforced. This was relevant, as the Code didn’t go into case specifics as much as individual cases themselves did, and the Digest pointed judges to which cases could still be used as precedent. The digest also introduced some of Justinian’s personal laws as well, which required the Code to be revised. The same year the institutes were written, and were intended to serve as a sort of legal textbook for law students. The excerpts used for the primary source in this presentation are actually from the Institutes.

The effects that the Code, Digest and Institutes had on the Byzantine Empire were profound but largely irrelevant, perhaps making life easier for this peasant and ending it for that homosexual, and making sure a son’s inheritance isn’t swindled, to the detriment of the swindlers. The Code’s biggest effect came in a very different world, at the beginning of the 11th century.

Most Europeans believed that by 1000 A.D., the world was going to end with the antichrist, Christ’s second coming and the four horsemen and all that. This assumption made the populations of these areas to not pursue new ideas of governance, since what would be the point if the apocalypse was almost here? When the apocalypse didn’t come about Europeans became more receptive of new ideas, or ideas new to them. So when someone found the Justinian Code, Digest and Institutes in northern Italy shortly after 1000, the Byzantine Law Code spread rapidly throughout the continent of Europe.

Soon after the Code’s discovery, scholars began to flock to Italian cities to study the Code. These centers quickly evolved into secular law schools, and did much to undermine church law, or at least raise skepticism. This is ironic, as the Code actually includes a section from the Codex Theodosianus which legitimizes Papal Law. The problem was that while the Code praised the Papacy of 529, its laws were very different from those of the Papacy of 1020. In some areas, the Justinian Code was adopted completely, but usually the Code was revised to accommodate regional customs. While the Code did much to dismantle church law on the continent, it made little inroads against English common law.

Continental Europeans tended to view English law with great disdain, and the feeling was mutual. The English viewed continental or “Code” law as harsh, inflexible and giving too much power to the accuser, while those on the continent viewed Common law as inconsistent, with different punishments for the same crimes from region to region. This rift still exists today, although the mutual disdain has significantly diminished.

The Justinian Code as New Law in Rome. (2016, Jul 22). Retrieved from https://studymoose.com/the-justinian-code-as-new-law-in-rome-essay 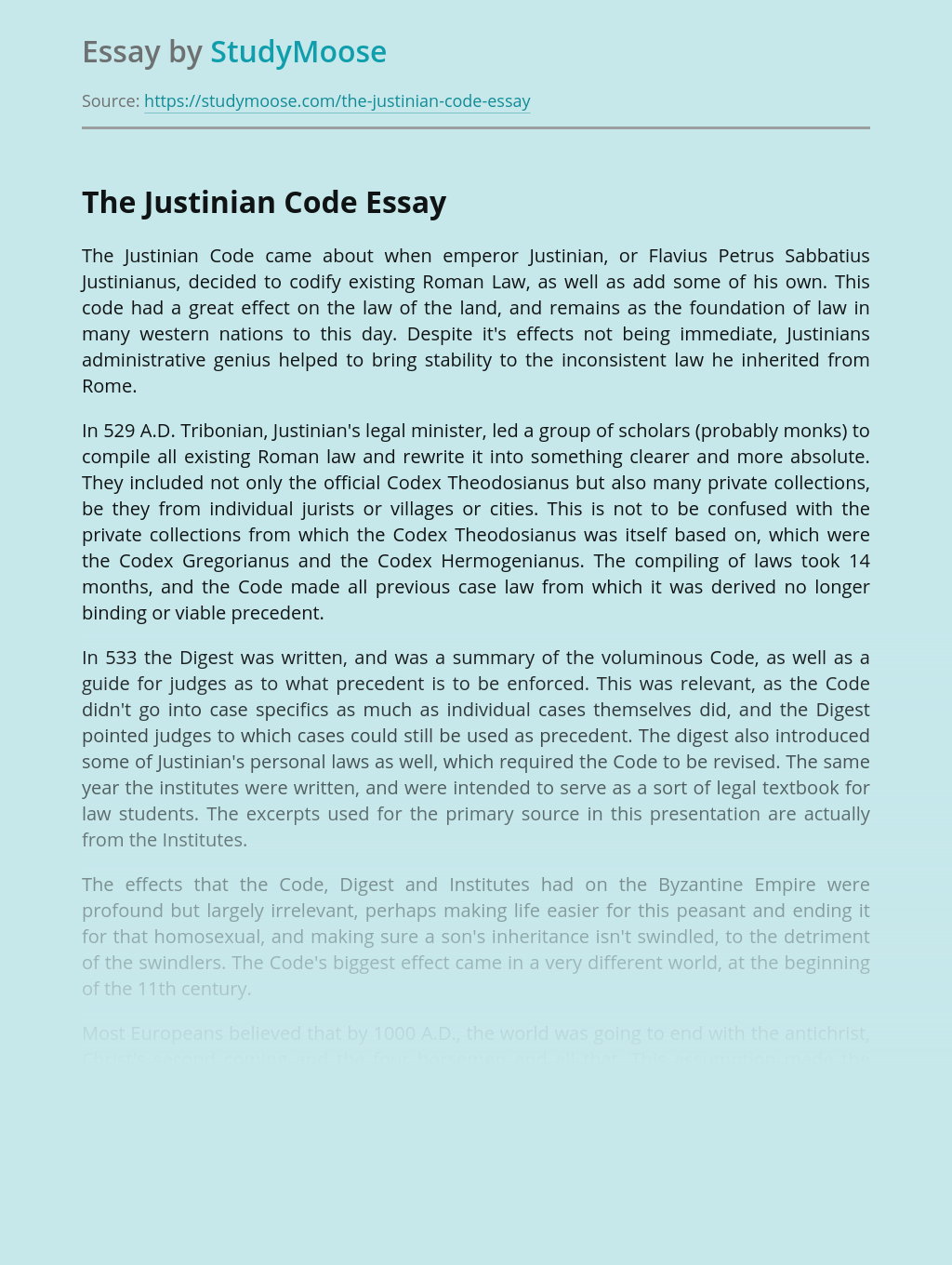 The implications of unmoved mover within Aristotle’s Metaphysics

Rate this post The first book of Aristotle’s works on logic is known as the Categories. This book tends to list the grouping into which objects naturally fall. According to Aristotle, by grouping objects, people can know them fully. These categories include the substance, quantity, quality, place, time, relation, state, position, action and affection. The...

Get Essay
Career Goals For A Physician Assistant

Rate this post My name is Doris Veshi. I would hereby like to present my application for the position of a physician assistant, as the most suitable candidate.  I aim at working for an organization where personal growth is encouraged, human values are nurtured and talents are utilized in the attainment of organizational goals. I...

Role of Grudges and Rivalries within The Crucible

Rate this post Arthur Miller’s play “The Crucible” is set in the 17th century in a village called Salem. It is written in the time of the McCarthy period in the 1950’s, when Joe McCarthy (senator of the USA) attacked people for communism. Joe McCarthy accused many people including Julius and Ethel Rosenberg for leaking...

Rate this post How far can a person go in life without the need of others? Is it possible for him or her to achieve success without having any sort of social dynamic to aid in the progress of their lives? Does having strong social connections aid a person in shaping his or her character...