The Impact of EU on the Irish Legal System

The purpose of this report is to highlight how European Law has affected the Irish Legal System and the extent to which these laws are binding in Ireland. Ireland began negotiations to join the European Union (EU) in 1972. For this to happen a referendum was taken and an amendment to the constitution had to be made. Ireland signed the Treaty of Accession and became an official member state in 1973. By joining the EU, Ireland accepted the supremacy of European Laws. This means that those laws are bound and must be applied in the country over National Legislation and even over the Constitution.

Don't use plagiarized sources.
Get Your Custom Essay on The Impact of EU on the Irish Legal System Just from $13,9/Page

This had a significant impact in the Irish Legal System as sometimes EU Laws and National Laws conflict and, if this happen, the EU Law takes precedence. (Accounting Technicians Ireland Course Manual)

There are two types of European Law:

The European Treaties are considered to be the Primary Legislation and they establish the European Union’s principles and laws.

Its major objective is to make the EU more efficient. After being developed, the Treaties must be signed by all the member states and then each member must ratify the Treaty in its own National Law. As to ratify the Treaties, Ireland must amend its Constitution which is done through referendum and only then the Treaty becomes Law and is brought into force.

Various Treaties were signed and amended over the time and to date we have six, which are:

Treaty of Rome: This Treaty established the European Economic Community (EEC) and the Institutions of Europe. Its major purpose was to facilitate trading between the community’s members by reducing the customs duties and establishing a Common Market for the EU

The Single European Act: This Treaty is a revision to the Treaty of Rome. It reformed the Common Market and gave rise to a Single Market within the European Community removing the remaining barriers and facilitating the movement of goods, services, capital and people between the countries which are known as the four freedoms. This gave great opportunities to the Irish businesses and economy.

Secondary Legislation derives from the Treaties and comprises of the following Legal Instruments: 3.1 Regulations: They are the most powerful secondary form of European legislation; as soon as they are passed they are fully legally binding in all member states without the need to form new laws. They are mainly used for uniformity of law throughout the European Union. They are on par with national law. Each member state is obliged to introduce the necessary measures to ensure they are fully implemented. (Keenan, 2012:298) An example of an EU Regulation is the EU Liquids Legislation which imposes restrictions on liquids carried into departure lounges at airports across the EU.

Directives: They are instructions and guidelines specified by the EU to the member states requiring them to standardise Legislation in certain areas within a specified timeframe. Directives are binding (as with Regulations) on members to achieve certain goals, but National Authorities are free to decide on their methods of implementations. They only become legally binding once they are transposed into National Law. (Keenan, 2012:298), http://ec.europa.eu/eu_law/introduction/what_directive_en.htm One example of a Directive that is having a major impact on the Irish legal system is the Working Time Directive (2003/88/EC) formerly (93/104/EC): It was introduced to protect workers health and safety; and minimum rules are needed on working time in all EU Member states. The main rules are:

Ireland implemented this Directive through an Act of the Oireachtas, The Organisation of the Working Time Act 1997. However Ireland was found to be in serious breach of this EU Directive in certain areas. They have laws in place for doctors working time, but a European Commission notice states that in public hospitals they often do not apply these rules to junior doctors and non-consultant hospital doctors’ .The European Commission will continue to monitor Ireland until they fully implement the Directive or they will face significant consequences. In November 2011 the EU social partners started negotiations to amend the Working Time Directive to meet the needs of employers and workers of the 21st Century. They hope to progress this during 2012 .Until such time as a decision is reached Ireland must continue in their efforts to fully comply with the existing Directive.

One example of a Resolution in which Ireland was the pioneer in adopting it, was the Ban on Smoking in Public Places- Resolution of the Council and the Ministers for health of the Member States, of July 1989.Their success encouraged many other members to adopt similar law. They implemented this through the Public Health Tobacco Act 2002-2004.They imposed a comprehensive ban on smoking in all public places and all work places including bars and restaurants. (Keenan, 2012:298)

In this section we take a look at a case which changed the way in which the ratifications of EU Treaties would be handled, the ramifications of which are still felt today. The Single European Act (1986), which was an amendment to The Treaty of Rome (1957), was to prove a step to far for Mr Raymond Crotty, an economics lecturer from Trinity College Dublin. “The Single European Act (SEA) was an international treaty which aimed to establish closer economic and political co-operation amongst member states”.1 The government at the time had already committed to the treaty when Mr Crotty “contended that the SEA gave new legislative and executive powers far beyond that agreed by the Irish people in 1972”.1 Crotty and his lawyers, which included Mary McAleese, sought for an “injunction to restrain the government from taking further action to ratify the treaty without first holding a referendum.”1 The teams’ most compelling argument advanced, according to Barrister Martin, writer for the Irish Times, was “that the SEA committed Ireland to formulating European foreign policy, repugnant to the Irish Constitution which asserts Ireland as a sovereign, independent, democratic State and affirms Ireland’s neutrality.”1 Another argument put forward related to the specific wording contained in the Constitution after the accession to the EU.

The Article in question (29.4.10o) stated that, “No provision of this Constitution invalidates laws enacted, acts done or measures adopted by the State which are necessitated by the obligations of membership of the European Union or of the Communities, or prevents laws enacted, acts done or measures adopted by the European Union or by the Communities or by institutions thereof, or by bodies competent under the Treaties establishing the Communities, from having the force of law in the State.”2 “Article 29.4.10o ensures that Ireland could fully comply with its obligations under EU law without fear of breaching the Constitution.”3 “Only laws acts and measures that are necessitated by virtue of Ireland’s membership of the EU are Constitutional immune.”3 The question, for Crotty was what exactly was necessary? Crotty’s lawyers argued the ratification was not strictly necessary in all parts for Ireland to remain in the EU and therefore not immune from challenge on Constitutional grounds. The State maintained Crotty had no legal standing (locus standi) and even tried to discredit Crotty citing a judgement by Mr Justice Henchy implying Crotty as a “litigious person, a crank, an obstructionist, who was succumbing to the temptation to litigate the Constitutionality of a law rather than observe it”1.

Despite his doubts Mr Justice Barrington granted the injunction, but in February 1987 a three man High Court made the decision to rule against Crotty and revoked the injunction. Crottys’ team immediately and successfully applied for another injunction to stop the government continuing with ratification of the treaty until the case could be heard before the Supreme Court. “On April 9th, 1987, the Supreme Court held that the European Communities (Amendment) act 1986 was not repugnant to the Constitution and that the president had acted in accordance with the Constitution in signing the Bill into law.”

Despite this disappointing ruling, the Supreme Court found the SEA itself to be unconstitutional and held that “the freedom to formulate foreign policy is just as much a mark of a democracy as the freedom to form economic policy and the freedom to legislate and concluded that the assent of the people as guardians of the Constitution was a necessary prerequisite to the ratification of the SEA (the treaty).”1 “The case brought by Raymond Crotty on the ratification of the Single European Act was clear. It set down that any treaty which substantially changed the concrete foundation of the union had to be approved by the people through a referendum.”4 The result of this has been to see the Irish Constitution amended to recognise EU law no less than seven times since 1987. It is 25 years since this landmark ruling, the impact of which has been felt many times and will continue to do so for many more.

In conclusion, we can see that the accession of Ireland to the EU had a huge impact on the Irish Legal System, from ratifications of EU Treaties to the implementation of EU Regulations, Directives and Decisions there has become a new legal order in Ireland.

The Impact of EU on the Irish Legal System. (2016, Dec 26). Retrieved from https://studymoose.com/the-impact-of-eu-on-the-irish-legal-system-essay 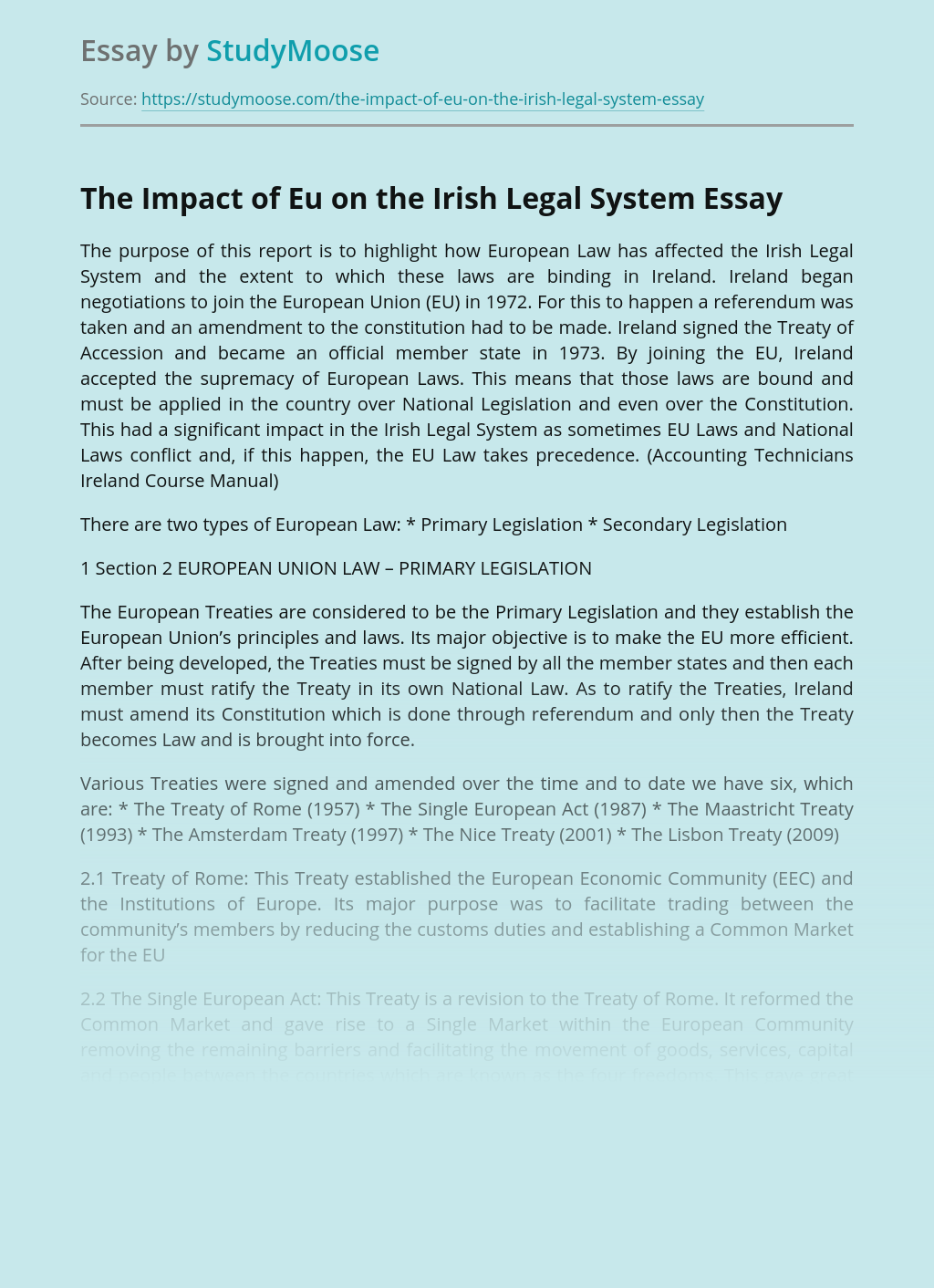 Universality and Reversibility: Justice and Fairness

Belonging is an instinctive human desire that is difficult to obtain due to the immensity of barriers placed to prevent it. Belonging can be achieved through the development of relationships between others as well as the establishment of a connection to place. Furthermore one can choose to renounce the conventions of society and thus achieve...

CHAPTER VI SUMMARY AND SUGGESTIONS FOR FUTURE WORK 6.1SUMMARY The main objective of the present investigation is in order to realize the second and third order nonlinear property of the synthesised crystals. Organic crystals formed with benzotriazole compound are identified as potential candidates for NLO applications to replace the inorganic, semi-organic crystals because of their...

In the world, there are many different outtakes on society. One of them is a Marxist view of the world. A Marxist believes capitalism can only thrive on the exploitation of the working class, but more importantly, creates a mentality towards society of “us and them”. While reading the play King Lear, a Marxist would...