“Culture is the intersection of people and life itself. it’s how we deal with life, love, death, birth, disappointment· all of that is expressed through culture.” Wendell Pierce. Culture exists in every society, we can see that culture is shared patterns of behaviour and interactions, a bonding tool that provides understanding learnt by socializing, which can be noticed through the growth of identities in a group of people. There are different types of cultural encounters such as universal history, archaeology, social and ethical psychology, law, religion, language and much more in the fields of living.

Don't use plagiarized sources. Get your custom essay on
“ “The Joy Luck Club” ”
Get custom paper
NEW! smart matching with writer

To put it in general it is a crucial phenomenon in the human history and society, that being viewed by the history of philosophy. The cultural encounter impacts both individual and society. This happens through the connecting of cultures whether in place and time, or their interactions with other people who don’t share the same culture, even conflict, collision and the inherited relations between two people by the historical roots, which help to change the persons thoughts and attitudes.

When the individual themselves live within a different society they start to adapt to the changes. We can notice some of the different forms of cultural encounters in the short story “The Joy Luck Club” by Amy Tan. Which are the challenges of the cultural translation, the power of storytelling and the problem of immigrant identity.

The theme of cultural encounters was reflected a lot in the short story “The Joy Luck Club”. The involvement is between two cultures the American culture and the Chinese culture.

Three types of cultural encounters is dispalyed in the short story “The Joy Luck Club”. The first encounter is the challenges of cultural translation that happens between the mother and the daughter in there incomplete knowledge of language. The second encounter is the power of the storytelling that shows us the difference between the mothers way of telling a story and the daughters way of her feelings towards the lost two sisters. The third encounter is the problem of immigrant identity that involves the place and the daughter fears in not knowing anything about her mothers culture. The cultural encounters were solved at the end of the story, the language barrier between the mother and daughter in the language handicapped the communication between them, also the lack of the shared words that let the translation process is there only solution which results in a lot of misunderstanding. For example, the daughters view towards the club was vague, reasons behind founding the club and calling it the joy luck club. She believed that the concept behind it could not be translated. While the mother feels impatient because her daughter does not understand the cultural concepts of her language, she does not intend to pass it through her generation. When the story comes to the an end, the daughter realizes that she will only accept the idea of understanding Chinese culture when it’s necessary to understand its meaning. Secondly, the power of storytelling, there is a clear existence of a language barrier between the Chinese and the American cultures, that leads to poor translation in the story. The mother uses storytelling to fill the barriers between her and her daughter, and to help their communication. The stories that are told from the mother are either educational or advice based on past experiences. For example Suyuan the mother hopes to find her long lost daughters and telling them her story, by this she keeps on telling her daughter about the two child story, for her daughter to assure them of their mother love and resolve if she couldn’t carry it on.

Amy Tans inspiration comes from her own biocultural background,her storytelling has relevance to people from many different backgrounds and cultures, this is what makes plain that Tan knew of the cultural encounter theme throughout her short story. The conflict of the culture is shown through the American societies. She was born in California and her parents were both Chinese immigrants, her father and brother died in her early age. Upon their death she learned that her mother was married before and she had fled from china, and because of the unstable events in china it had made her leave three daughters behind. They moved to Switzerland so that Tan can finish high school but there was a conflict between the mother and the daughter about the degree which Tan chose. After she was married she started studying a PhD, but she quit in order to become a writer. Culture backgrounds display themselves throughout the story they appear through the Chinese game (mah-jong), the food (wantons), and the silk clothes. It was based on truth even for the idea because the story comes from true events and events that the writer experienced. You can see in her real life that Tans mother revealed about the existence of her three daughters after moving to Switzerland, she had them from an early marriage, and she lost them because of a conflict that happened china which led her to flee. While in the story Suyan the mother lost her twins but she didn’t live long enough to see them again, yet in reality Tans mother does in fact get to see her lost daughters again. This shows us that Tan creates both facts and fiction in her story, which focuses on the two cultures and the different generations thoughts. It also focuses on the Chinese daughters who become American in thoughts and culture. The ways in which Tan expresses communication between the two generations is important, she uses a lack of the sharing words. For example in the story the father believed that the mother died because of unexpressed thoughts “unvoiced ideas” then later on Jing-mei mentioned the struggle in communicating with her mother which led only to misunderstanding ” I can never remember things that I didn’t understand in the first place”. (Prescott. 60)

The extract makes plain that the characters themselves were aware of the cultural encounter theme and it was expressed through the conflicts between the two cultures and there response and reactions. The theme mainly concentrates on identity and heritage which displays signs that Jing-Mei was ashamed of her culture, she expresses feelings of dislike about the clothes her mother would wear at the joy luck club, how were they attached to the pattern of the Chinese dress which she saw as funny ( the stiff collars, the silk fabric and the blooming embroidery) and she imagines that the joy luck club as a place of secret gathering like the Ku Klux clan or the tom-tom dances of TV Indians preparing for war. Moreover when she entered and experienced its events for herself she began to understand it more, it was clear enough when she accepted the joy luck club gift which was about $1200, she realizes it was the first step in the full discovery and the acceptance of her cultural heritage.

The Chinese game mah jong played the most important role in the theme of the cultural encounters in “the joy luck club” it is a symbol of Chinese culture. Mah jong is an ancient Chinese game and was found in America around the early of the nineteenth century, it is played by dice, divided into seven suites, circles, characters, dragon, winds, seasons and flowers and usually it consist of four players. This game is regarded one of the most symbolic tools of the Chinese culture, the game represents forty years of Chinese tradition along with the inheritance of the mother seat and her legacy to her daughter, to keep on the legacy and not to be perished. But the hesitation from Jing-Mei in taking her mothers place. Tan expresses the fear of being unable to communicate comfortably with her mothers friends (the previous generation), that leads her to think she can’t replace her mothers position nor acquiring the same personality. As we can see this game signifys the identity in each character and the behaviors towards each other.

Memories play a big role in the theme of the cultural encounters through the reminiscing and the storytelling of the past, it reveals the narrative structure of the story. As the first set of events the mother was born and lived in china until her early age, second set was the immigration and the hard communication between the mother and the daughter in which they hardly share the same language, third set was the relationship between the mother in the old age and the daughter in her adult life, the fourth set was the story of the mothers experience as an immigrant in the us. In all of these themes the mother and the daughter interwave their present lives with the memories of the past, while Jing-Mei recalls her stories in episodic ways and the mother by memories. It highlights the w encountersin the way of storytelling and passing down the culture to the next generation. It is based on actual events and presents how immigrants suffer in settling in new cultures and how they convey their thoughts to the next generation. The development in the memories played a complex role in the story, the fact that the Jing-Mei has difficulty in recalling and retelling her mothers story, or even knowing her mothers character in which she kept remembering a glimpse from her mothers past. These memories came back to her when the three old ladies gave her the money to travel to china and tell her about her lost sisters and that she has to tell them about her mothers story. Jing-Mei realizes that she does not not know anything about her mother, ” what will I say? What can I tell them about my mother?, I don’t know anything. (Prescott.P60) 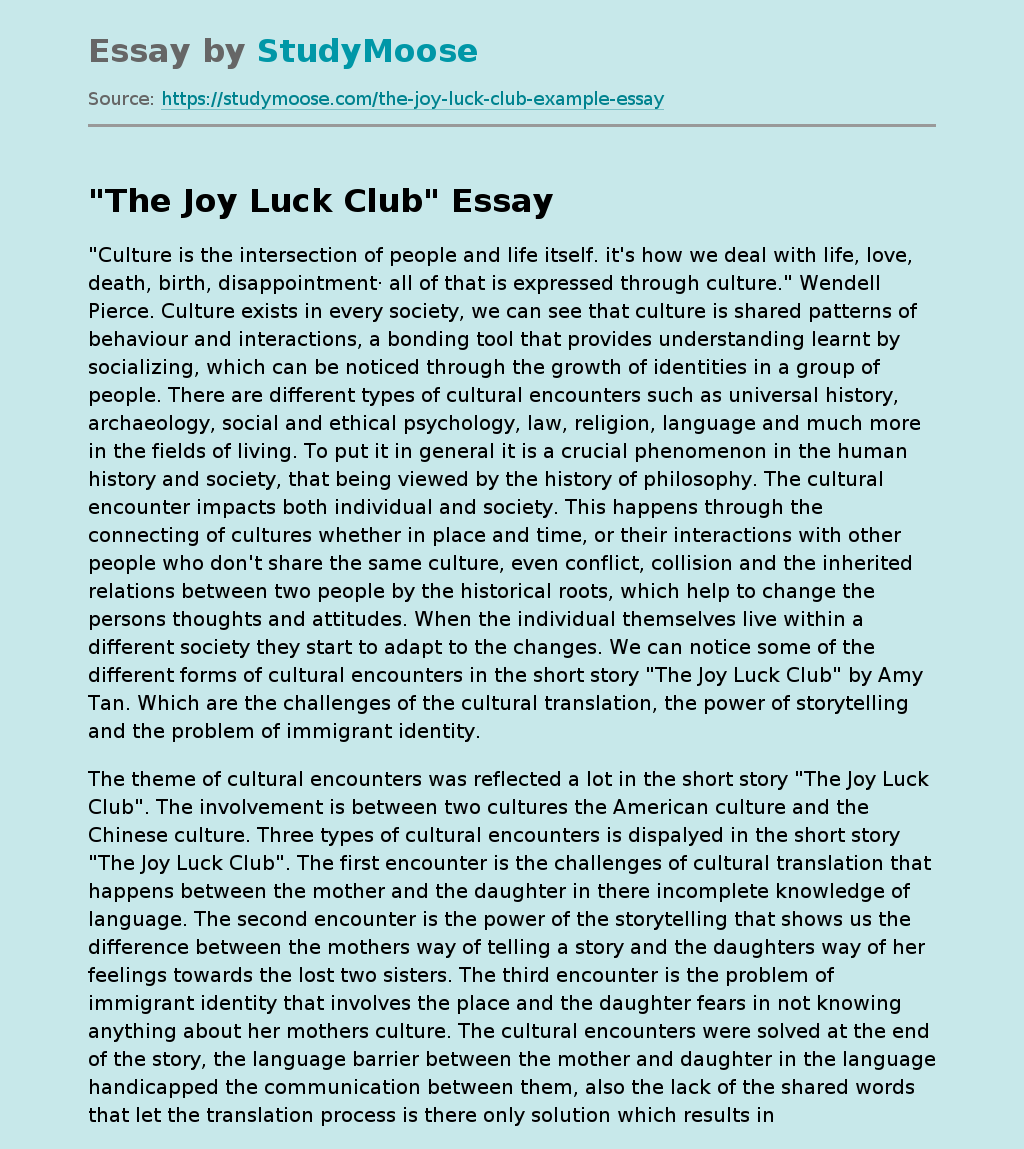