“So the Taiyuanese mother continued to choose their daughters-in-law, ones who would raise proper sons, care for the old people, and faithfully sweep the family burial grounds long after the old ladies had gone to their graves (Tan, Joy Luck Club, 51)”. It was only the mothers of the males that were the ones to go and find the girls who their sons marry and spend the rest of their lives with. These choices were very important since the son’s wife would be the one to take care of the family matriarch in her old age, not the sons.

Don't use plagiarized sources. Get your custom essay on
“ Essay About Tan, Joy Luck Club ”
Get custom paper
NEW! smart matching with writer

Lindo knew she was getting a bad husband, but she had no choice.

“That is how backward families in the country were (Tan, Joy Luck Club, 51).” Lindo did not agree with what was happening; she did not like how the customs went unchanged and women could still not choose their own husbands. “We have made a contract. It cannot be broken (Tan, Joy Luck Club, 52),” was the attitude.

Even if the girl wanted to get out of her marriage, she was not able to because of the contract her family had signed saying their children would be married to each other. The contract was not allowed to be broken.

The dowry was included in the marriage contract. “All the heavy furniture and bedding has to be left behind, and these were promised to the Huangs as my dowry (Tan, Joy Luck Club, 53).” A dowry needed to be provided from the girl’s family to make her more attractive and worthy of marrying.

“This was the first time I realized the Huangs had a much better position than my family. They looked down on us which made me understand why Huang Taitai and Tyan-yu had such long noses (Tan, Joy Luck Club, 54).” Lindo will be lifted up in social standings because the family she was marrying into had a higher social standing.

The Huang family looked down on Lindo’s family because they were from a lower class. Lindo’s family could not refuse the marriage offer because they wanted their daughter to have a higher standing and there may not be another chance. Before Lindo was married, she moved into the Huang house and was put to work right away. She did what she was told because she did not want to disgrace her family and she had made a promise to her parents that she did not want to break. 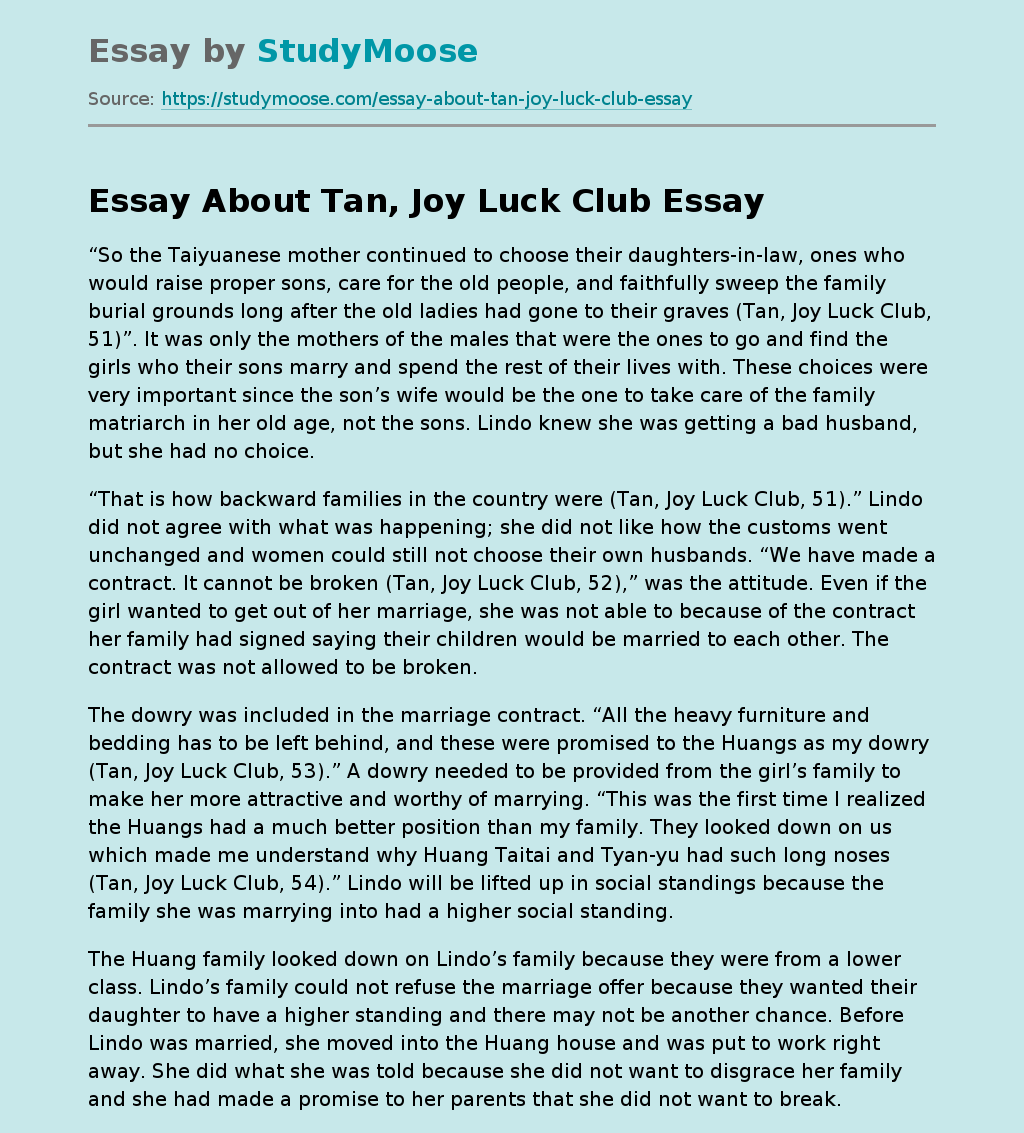