The Intermountain Region is a region that is located in parts of Canada and America, while lying between the Rocky and Coast Mountains, the Cascades and the Sierra Nevada. The high plateaus and isolated mountains with the only deserts in the US of A are very sparsely populated (excluding major cities). In Canada, this region is consisted of the interior plateau valleys of BC and the Yukon.

The economic development of the Intermountain Region is greatly affected by its topography which is full of streams and rivers which instead of flowing into the sea, instead flow into the brackish lakes or disappear into desert sinks.

Don't use plagiarized sources. Get your custom essay on
“ The Intermountain Region ”
Get custom paper
NEW! smart matching with writer

However, there are still some that do reach into the ocean. The dry deserts of parts of the Intermountain Regions do not do well when it comes to agriculture- farming operational costs have increased greatly because of the need for irrigation which means that contrastingly irrigation companies generate lots of income for the region and nation as a whole.

But this may be dangerous as the companies are going into long term debt from rushing to upgrade their systems in the next century. Death Valley does just fine though with its lack of water, do to being a large tourist attraction with its warm climate in that area, contributing to the economic development.

As before mentioned, the climate in the Intermountain Region varies with elevation and location, in some parts it is cold and wet or dry and hot in winters. Going southward winters are lacking in precipitation and are dry and short.

North, precipitation is also scarce but the climate is more moderate with dry, hot summers and moist winters. Also in the north, because the summers are shorter the growing season is shorter as well, which does not help the agriculture industry. As you go farther down the eastern slopes of the mountains, air retains moisture and warms up. The Intermountain Region is so dry because of this rain shadow effect.

As a cause of this, vegetation is made up largely of sparse grassland and plants that do well in semi-desert or desert climates. The Intermountain Region is full of contradictions however, as the areas that are higher up are covered in forests full of pine trees. These pine trees cover over 60 million hectares contributing 15 Billion dollars to the foresting industry, but because of the industry’s clear cutting of old growth forests and damaging logging practices, approximately 36 million hectares are now protected.

In conclusion, Topography, climate and vegetation greatly influence the economy of regions as well as the settlement patterns. The Intermountain Region is diverse in its ways of economic gain and topography. 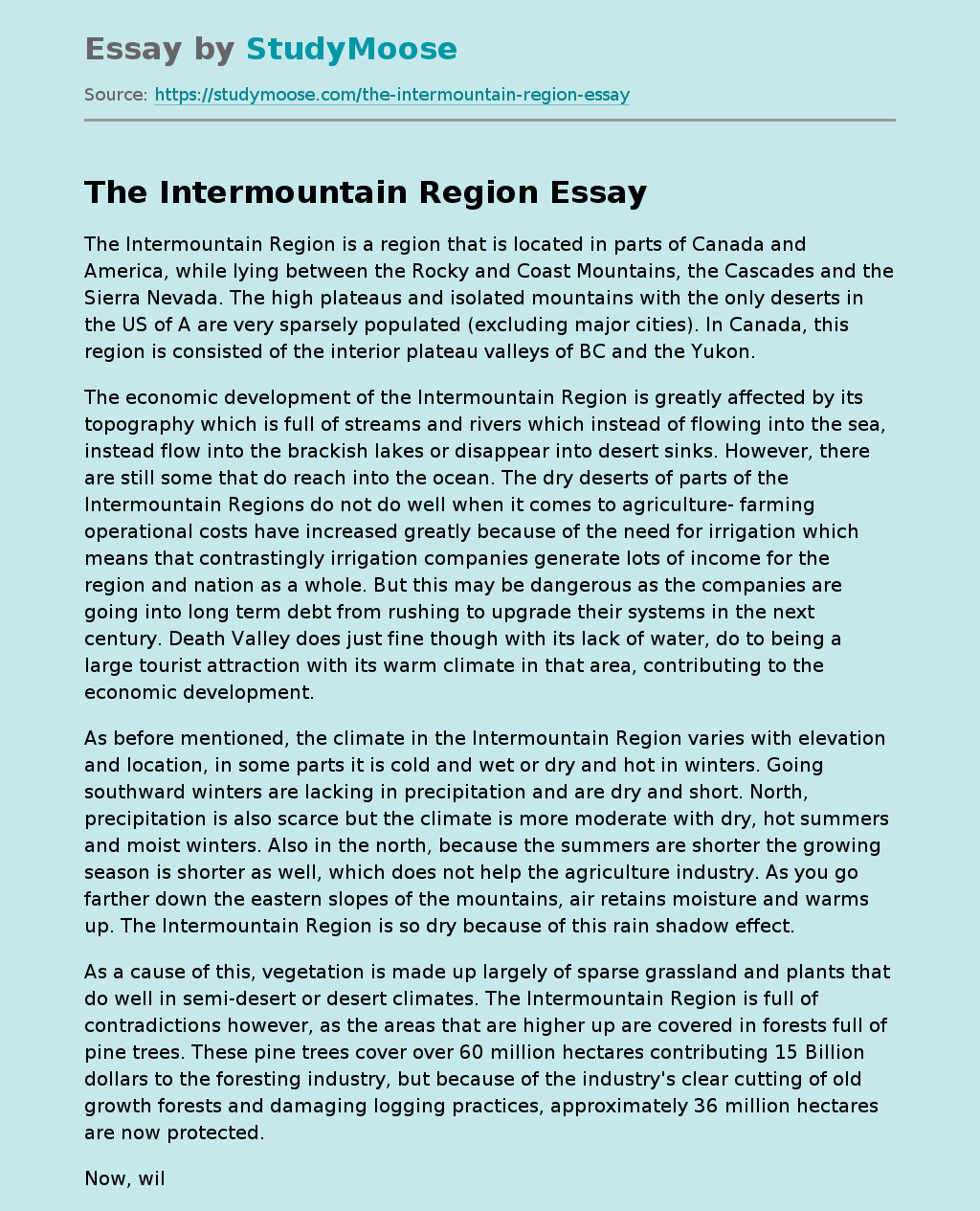