The Influence Of Technology In Music

Music technology might be defined as any form of technology, which helps a musician to make music. The impact of technology on music is overwhelming. Technological advancements in the last century have revolutionized the way we make, market and listen to music. To be specific, the invention and evolution of samplers, synthesizers and computer technology has changed the way music is now produced.

Music Industry is an activity of companies and individuals that share the aim of promoting performers and selling recorded music.

Turn in your highest-quality paper
Get a qualified writer to help you with
“ The Influence Of Technology In Music ”
Get high-quality paper
NEW! AI matching with writer

They make lots of money and is dominated by a few major record companies, such as Universal (United States), Sony (based in Japan), EMI (United Kingdom), Warner (United States), and BMG (United States). Technology has a great impact on the music industry in both good and bad ways.

Music industry has an ease in publishing music as highly developed devices are replacing real musicians, which saves the music industry a lot of money. It is also advantaged by technology as the quality of recordings have been improved and technology has helped the music industry promote DVD’s and cd’s to look better than they actually are.

This may help the music industry but not its customers.

The music industry has been severely damaged by peer-to-peer music sharing programs. These programs allow people to download any music they want. As more and more people are being hooked on these programs, there have been fewer sales for the music industry making it loose lots of money.

New technologically advanced devices are allowing untalented or not so talented people to be successful and freely available access of products negatively affects performers. In addition, if styles produced by computers (techno) are even more popularized there will no longer be any need for musicians.

During the 20th century, many composers made use of new technology to experiment with musical sounds. Recording on tape allowed composers to record sounds, then change and rearrange them to create a new musical work. The piece was then played back through loudspeakers. This meant that the composer did not need performers to interpret the music.

Many composers now use synthesizers and computers to create sounds. Others have composed pieces using a mixture of electronic sounds and traditional instruments. An example is Kontakte by the German composer Karlheinz Stockhausen

My final example of the way technology has influenced music can be cultural music. We all know what cultural music is. It is the music and styles our ancestors had created passed down orally like (Like Traditional Turkish music) As technology is being widely used, it has allowed styles like American pop influencing the cultural music of countries.

To conclude technology in music has influenced the whole world including the music industry, music itself and musicians both negatively and positively according to the views and opinions of people.

The Influence Of Technology In Music. (2016, Jul 19). Retrieved from https://studymoose.com/the-influence-of-technology-in-music-essay 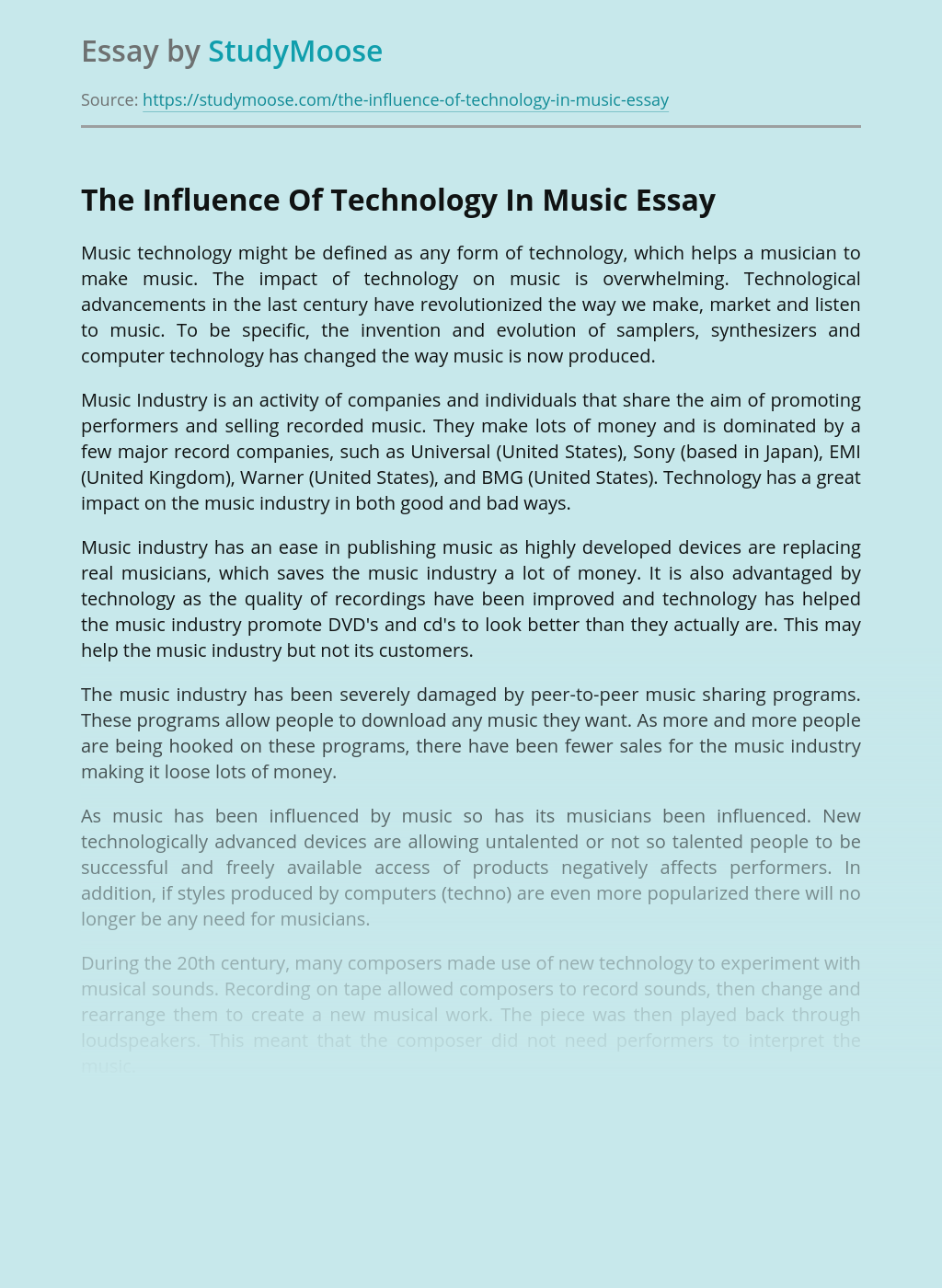 Turn in your highest-quality paper
Get a qualified writer to help you with
“ The Influence Of Technology In Music ”
Get high-quality paper
Helping students since 2015
Stay Safe, Stay Original