The Importance of a Family’s Structure

The relationship between parents in a family is essential for their children’s behavior. Being rased in a peaceful environment will lead to healthy growth. Parent’s behavior indicates directly to the child’s development. As fewer children are being raised by two parents, the concern for children who are experiencing changes in the structure of their families has risen. Children whose parents live apart are twice as likely to drop out of high school as those in two-parent families and twice as likely to become single parents themselves (McLanahan & Sandefur, 1994).

Don't use plagiarized sources. Get your custom essay on
“ The Importance of a Family’s Structure ”
Get custom paper
NEW! smart matching with writer

Children who are raised in a two-parent family are more likely to have a more positive perception of life. The support of their parents helps them grow healthier and see things from another point of view. The commitment of both parents toward family makes it stronger and a better environment for the newborns. The good relationship between the two adults is also transferred to the child. Children who are grown by two continuously married parents are less likely to experience a wide range of problems (Amato, 2003).

A part of family structure are also siblings, who play an important role in the development of younger siblings. Even though they might seek attention most of the time, siblings, who act jointly continuously affect younger one’s social development and the creation of personality as they have perceived from their parents. As children grow up while being rivals they might create strong bonds between each other. While they might compete at first, those who are trained well by their parents, later on, might create strong relationships and support.

While growing up older siblings may become strong role models of the younger ones, as they take each other’s habits (Brody, 2004). According to an article at the KidsHealth website, “As you grow up, your friends might change, but your family is your family forever.” Children who have had the support of their siblings might feel more secure and have a higher self-esteem.

Role of family in socialization

Family plays a major role in the socialization of their children. Socialization is a long-life learning process and social experience by which individuals learn the culture and develop their potential (Maccionis, 2014).

The first values, abilities, thoughts, perceptions, and lessons of a child are gained during the period when they are still strongly related to their parents. The care and attention that children receive from their parents indicate the ability to handle different life issues. This ability helps them to set up later relations with other people outside their family. Family is a communication belt for the spread of culture and values on the oncoming generation (Merton, 1949). According to Goldsmith (2000), in a society, specific values and behaviors thought to be important and fundamental for children’s growth and development are perceived by parents. For example, children are affected by their parents’ behavior, choice of dress, attitude, and education. While they are growing up and become adults they assemble information that shapes their roles as parents, their perception of men and women, their perception of life, their beliefs and their attitudes. For example, how a person makes plans or sets standards are learned from childhood. Parents choose to use and transfer to their children those principals that they learned when they were young.

As children grow up they understand that people have wishes, needs, interests, and ways. Children who are growing up in a family with other siblings learn to share the things that they have with each other, so they learn what living with others means. This later helps them collaborate and create relationships with new people during their life. Siblings help the younger ones to create proper informal behaviors such as how to act at school or how to acts around friends, behaviors which help on their everyday life experiences. By taking the older one’s habits, children strengthen their communication skills.

Children create their personality with the influence of the environment that they grow up in. The relationship between family members and the way they act as a social group affects the identity development of their child. A report by Sue Flanigan at West Virginia University states that there is a chance that birth order can affect the shaping of a child’s self-perception. Parents who are more supportive and encouraging toward their children are most likely to develop a more confident child and with higher self-esteem. Children raised by more critical parents tend to have lower self-esteem, especially when they are criticized for their physical appearance (Harter, 1993).

The discipline strategies that parents choose to use indicate in their child’s identity. According to researchers at Boise State University conflicts within the family have negative effects on the development of children. Individuals raised by authoritarian parents are more unhappy, have lower self-esteem and are unfriendly. On the other hand, children who have had the support of their parents and have been disciplined by them have learned a lot from the adults.

The Importance of a Family’s Structure. (2020, Sep 12). Retrieved from http://studymoose.com/the-importance-of-a-familys-structure-essay 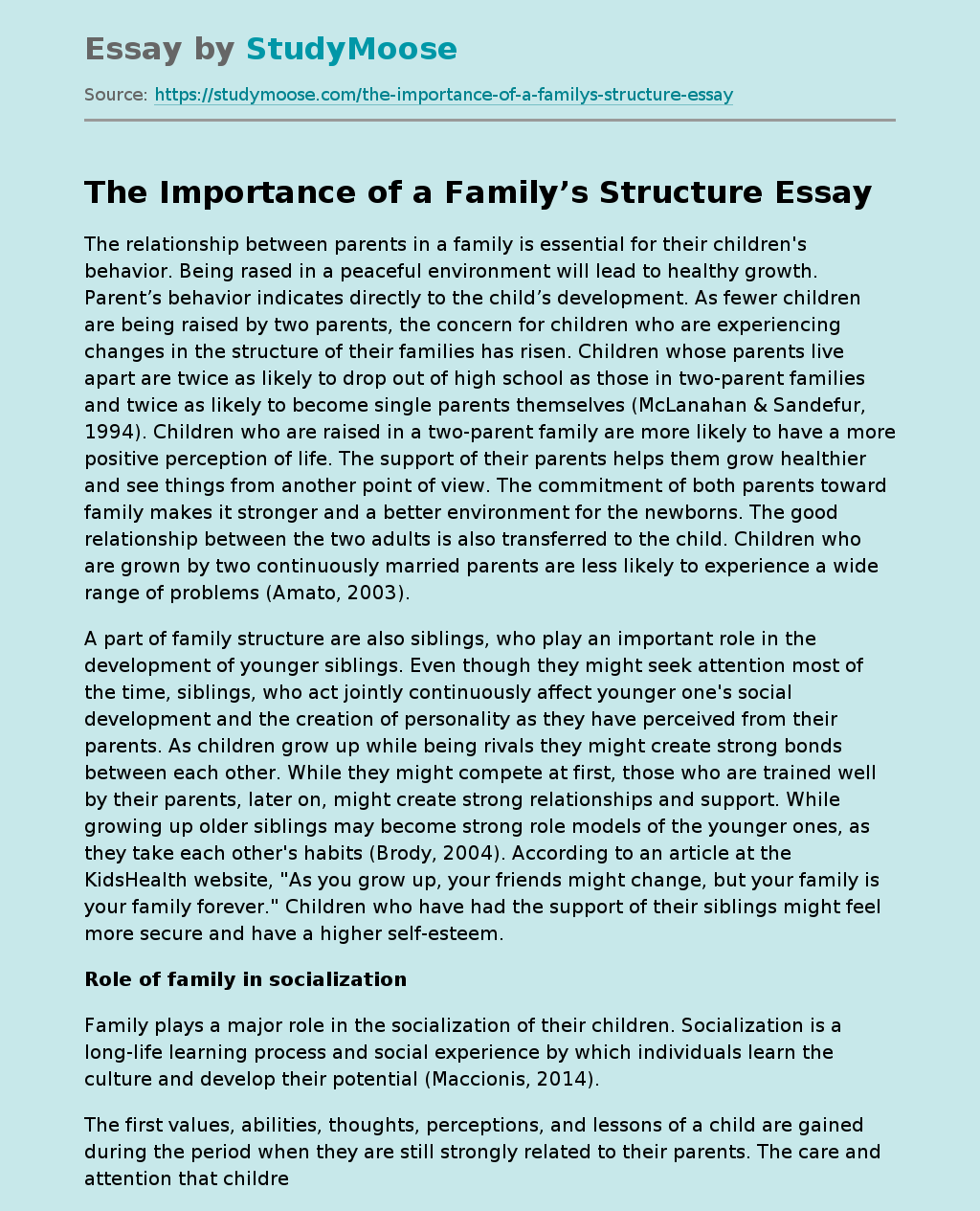