The Impact of Police Brutality and How People Views

According to the Whitman, David.1993. ‘The untold story of the LA riot.’ U.S. News & World Report 114:34. Before he heard the first siren, Rodney King knew he never should have slipped that key into the ignition. They had been having lots of fun, he and his buddies Bryant Allen and Freddie Helms, just kicking back, sipping some inexpensive forty -ounce bottles of malt liquor at the local park as they jawed and laughed while the daylight ebbed away. Afterward, they had stood in front of Allen’s mom’s house trying to croon a few tunes.

Don't use plagiarized sources. Get your custom essay on
“ The Impact of Police Brutality and How People Views ”
Get custom paper
NEW! smart matching with writer

King was not much of a singer but when he switched rapping, his buddies felt he was almost in a groove.

Additionally, it was after midnight and suddenly King was driving his car, flying down the highway at eighty miles per hour, the radio blaring, him and Allen singing again, and then there it waste flashing light atop the highway patrol car bouncing off his rearview mirror, filing his car with a red light that King had learned to dread.

King knew, as he later testified, that he was drunk and that if the police caught him speeding, he soon be back in prison for violating parole. (Whitman, 1993, pp. 34-57).

In the middle of the night of March 3, 1991, George William Holiday, videotaped the encounter between Rodney King and several police officers. The tape, however, was edited before it was broadcasted. Before he was sent to prison, Rodney King was beaten several times by three police officers as he refused to exit his car at the order of their sergeant who was on the scene.

It is said that King was subsequently stricken over 56 times, kicked at least 6 times, and shot twice with a taser electronic stun gun, holding over 50, 000 volts of electricity per shot. Additionally, 23 other officers stand watching on the scene in which none made effort or suggest stopping the crude combat.

Consequently, king suffered extensive injuries including skull fractures, broken bones, and nerve damage to his face and body. Twelve days later, the three police officers involved in the beating, as well as their sergeant, were charged with assault by force likely to produce great bodily injury and deadly weapon along with several other charges all indicted by a grand jury. People who lived in the time of the attack or heard about it will never forget the event and the trial, and that us how much of an impact he made on America. In addition, it was one of the most controversial events involving race that has taken place since Martin Luther King and the 60’s era.

The Impact of Police Brutality and How People Views. (2020, May 08). Retrieved from http://studymoose.com/the-impact-of-police-brutality-and-how-people-views-essay 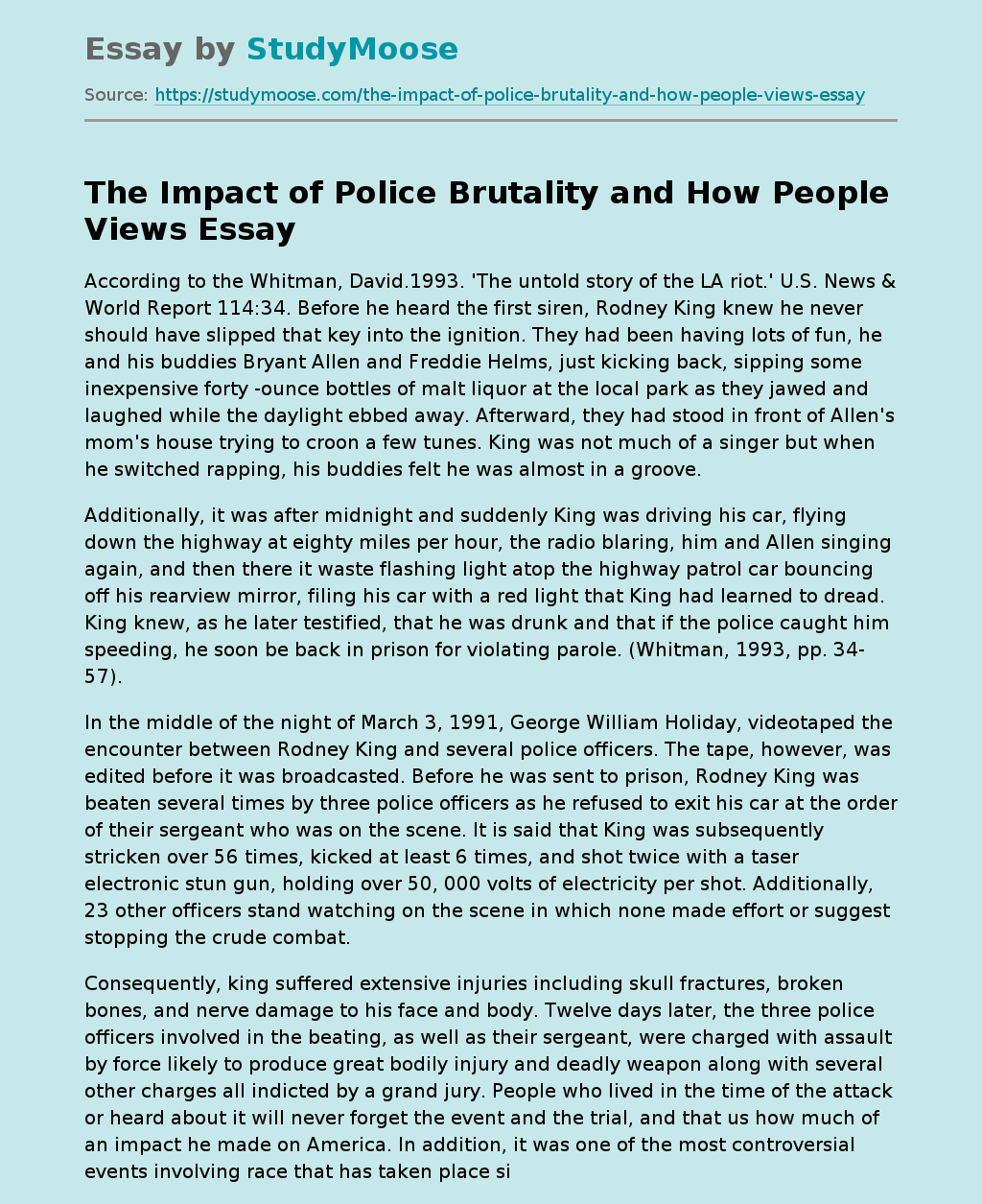