The Impact of Human Trafficking on Society

It is undeniable that there are many issues and problems that humanity is facing on a global scale. In the book “Taking Sides: Clashing Views on Global Issues” by James Harf and Mark Owen Lombardi (2006), issues such as the existence of overpopulation to global warming and human trafficking are discussed and debated upon. Since the world is facing such difficult times, is there even a way of addressing all of them? Is there a possibility of even eradicating the problems, or at least of lessening the overwhelming percentage of the issues? One of the many issues discussed in the book is human trafficking.

Don't use plagiarized sources. Get your custom essay on
“ The Impact of Human Trafficking on Society ”
Get custom paper
NEW! smart matching with writer

Human trafficking is by no means a light issue or a shallow global problem. In the documentary produced by Chris Hilton and directed by Aaron Wolf (2003) entitled “Dying to Leave,” human trafficking was portrayed as a big problem that people should be aware of and which authorities should at least lessen if they cannot completely eradicate the problem.

This becomes a concern of society when the problem amasses to a large scale and death is already on a tantamount scale. As what was shown in the documentary film, “ 150 children were killed in a matter of [mere] minutes” (Hilton & Wolf, 2003).

Therefore, human trafficking is more horrifying than what people perceive it to be — it is something which is greatly affecting humanity over-all. Why is human trafficking such a big issue then, and why is that authorities, most especially those who are in charge of immigration and guarding of borders and porters, find it such a difficult task to control illegal immigration? Most of all, what are the effects and/or impacts that this particular issue is causing society? These may be explained by the documentary by Hilton and Wolf and the various people who told their story in the film.

The First Impact on Society: The Cause and Effect of Globalization According to both the book and the film, globalization is one of the root causes of human trafficking. Because of the tantamount advertisements and images shown via mass media, people from all over the world develop a belief that there are greener pastures available elsewhere and that there are innumerable opportunities existing. Globalization has therefore created the problem and the mentality that people should leave their homes and go elsewhere.

This situation causes the immigrants to explore the outside world and can open their eyes to both wonderful possibilities and horrifying circumstances. The Second Impact on Society: The Illusion of a Better World Another impact that human trafficking has is that people develop the mentality that they are in such a poor situation and that if they leave their country, there would be better things awaiting them. As what was the experience of the Chinese man by the name of Henry Zheng showed, leaving their home place is sometimes not a good thing at all.

According to him, their village is composed of families who have members sent to the West (America or Europe). This is most probably caused by the mentality that people have wherein they believe that if a person is “worth anything, he should go to America” (Hilton & Wolf, 2003). Thus, people develop an over-all belief that their own country is not enough. In turn, this could also lead to the mentality of the loss of own cultural identity and the virtue of patriotism. The Third Impact on Society: When Human Smuggling becomes Deadly

Another experience shown in the documentary is that of Faris Kadhem who lost his wife and only daughter on the horrifying trip for a better life. Human trafficking does indeed hold such promise of a better life — as what is shown in television shows in different parts of the globe. However, the trip itself can be deadly as the passengers are ill-treated, congested, and packed together, are given little or no food at all, and sometimes, even develop illnesses on-board vessels.

At times, like in the case of Faris Kadhem, it can also cause the loss of lives. Human trafficking’s impact on the society lies on the death that this human trafficking is causing. The trip itself can be dangerous. However, there is the other case of surviving once you reach the borders of the other country — in the case of females, it can be very mortifying, as what happened to Nina Matveyenko and Marcela Palacios.

The Fourth Impact on Society: Slavery and Prostitution People sometimes willingly migrate to other countries by means of human smuggling — they are exceptionally aware of what they are doing as what happened to Henry Zheng and Faris Kadhem. However, the stories of two women in the story can altogether be very different. Nina Matveyenko and Marcela Palacios were duped into thinking that they would have better lives by the respectable jobs that are waiting for them; little did they know that they would be sold as mere merchandise and would be slaves or prostitutes.

Human trafficking therefore, has created an entire new world of “head hunting” wherein human traffickers would be able to safely smuggle young women to be slaves or prostitutes. It has, in some effect, a possibility of organized crime and recruitment wherein women would be forced to obey the whims of whoever bought them. This causes an alarming issue regarding women’s rights. As what Janie Chuang (2006) stated, women comprise the majority of trafficked people (cited in Harf & Lomabrdi, 2006).

This is most likely due to the fact that women are sold as slaves and/or as prostitutes (Harf & Lomabrdi, 2006). The Fifth Impact on Society: Why Migration Can Also be a Good Thing (But That is Altogether Very Different from Human Trafficking) As what the first impact discussed in the essay, migration can also be a good thing. Migration can develop interconnectedness of different nations and create opportunities for other people to explore other cultures different from their own.

Migration causes a very colorful diversity to countries when it could be otherwise dull and monotonous. However, human trafficking is very different from legal migration. Human trafficking can cause such grave consequences for the people involved, for the organizers, and for the family and country left behind. As what Hilton and Wolf (2003) showed in their documentary, there are villages in the countryside of China wherein the males are not even present anymore — “no male. ” That scene can say a lot about what is happening and what may happen in the future.

The Impact of Human Trafficking on Society. (2016, Sep 24). Retrieved from https://studymoose.com/the-impact-of-human-trafficking-on-society-essay 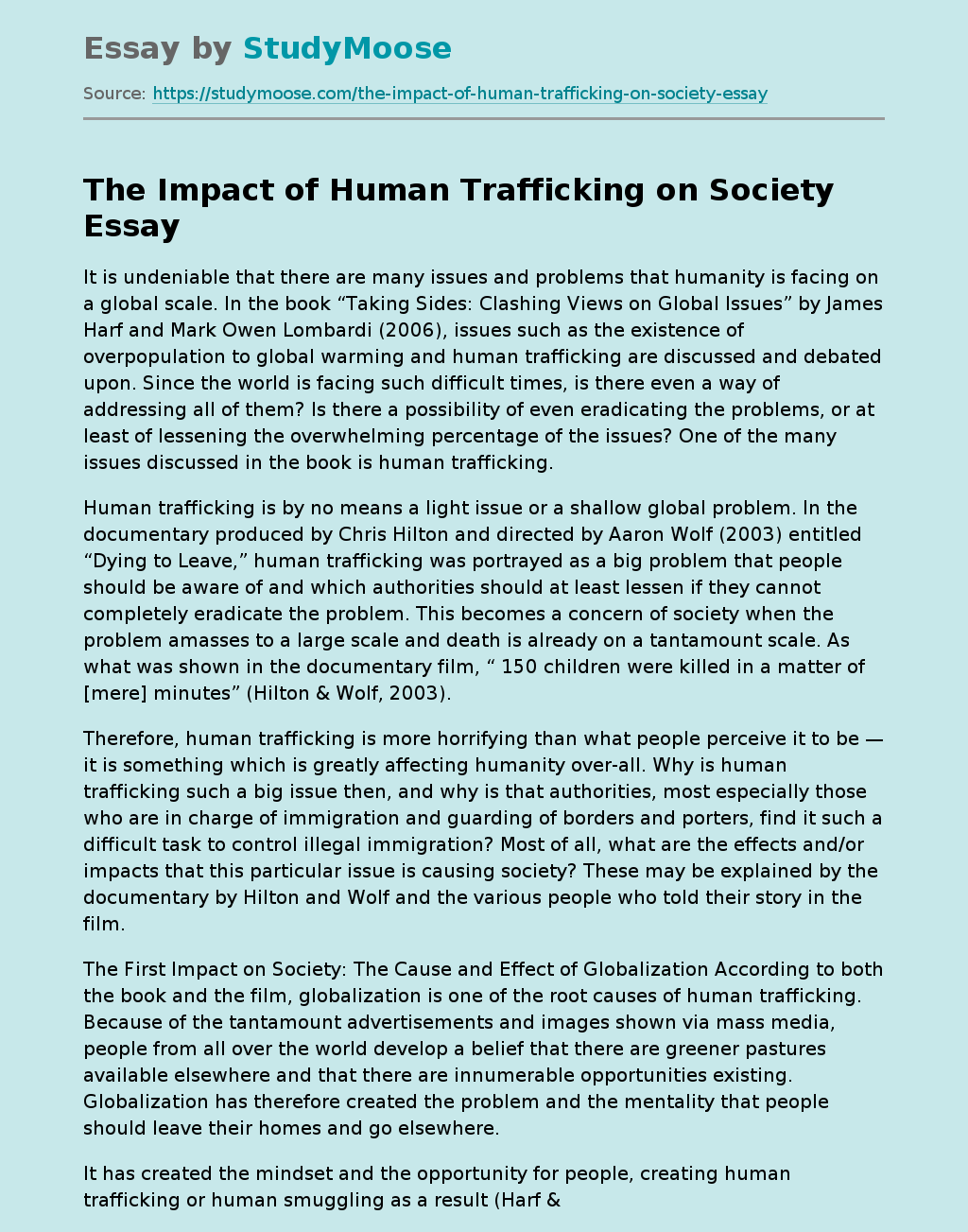