The “American Dream” is thought of as all things are possible regardless of where you came from, rich or poor, you have the same opportunity as the next to achieve wealth and status, but the pursuit of the “American dream” can be inspirational to one, or it could completely knock someone to the breaking point and causes Hallucination which is caused by chasing the dream, This is what happens to Willy Loman and his family. His sons, Happy and Biff, and his wife Linda.

Don't use plagiarized sources. Get your custom essay on
“ The Illusion of American Dream in Arthur Miller’s Death of a Salesman ”
Get custom paper
NEW! smart matching with writer

Willy is a sixty-year-old traveling salesman’s who dreams of wealth and success. Sadly, he doesn’t reach them. Willy wanted to be able to provide for his family and pass lessons and wealth down to his two sons. He wanted them to be successful and to make them proud of him, but this is just a part of how this ruined his family and their relationships.

To Willy Loman, being successful is seen as being a very well-liked businessman.

He says this because he believes that if you are well-liked then making money and having a good business is easy and you don’t have to work as hard for it. He tells this to his sons in hope that they will become successful businessmen one day. He drives into their heads that they must become businessmen to be successful. Yet Biff doesn’t see his dad’s “American dream” and his the same. He wants to move to a farm and run that. This causes him to leave home and not send a letter or reach out to his dad which made his dad feel like he had been betrayed.

Happy on the other end has a decent paying job but he has personal issues that cause loneliness that makes him sleep with lots of women even if they’re married or in a relationship.

When willy starts to have these Hallucinations, he kind of creates this fantasy world that he goes into when he has become too stressed or doesn’t want to deal with the real world. He can’t come to terms with what is real and what is fake. His wife Linda who plays along with his lies and tells him the truth doesn’t help the situation, yet she feels like she is doing the right thing. During the Hallucinations he starts to have flashbacks of when his kids were younger and when they boned together, it made him feel like he did a good job as a dad. The major thing he sees is his brother ben, which to him represented “success” because of what he did in Africa. But these hallucinations bring bad lucks as well, he loses his job because of his behavior and his personality.

After losing his job, Willy see that he isn’t good a good job at achieving the “American Dream” and he sees that he’s not providing for his family how he believes he should, he deiced that he would take his own life for the insurance money, so his wife could pay for the house and live comfortable and so his sons could benefit too.

In conclusion, Willy Loman had his eyes on the “American dream” but didn’t quite reach it.

The Illusion of American Dream in Arthur Miller’s Death of a Salesman. (2020, Nov 19). Retrieved from https://studymoose.com/the-illusion-of-american-dream-in-arthur-miller-s-death-of-a-salesman-essay 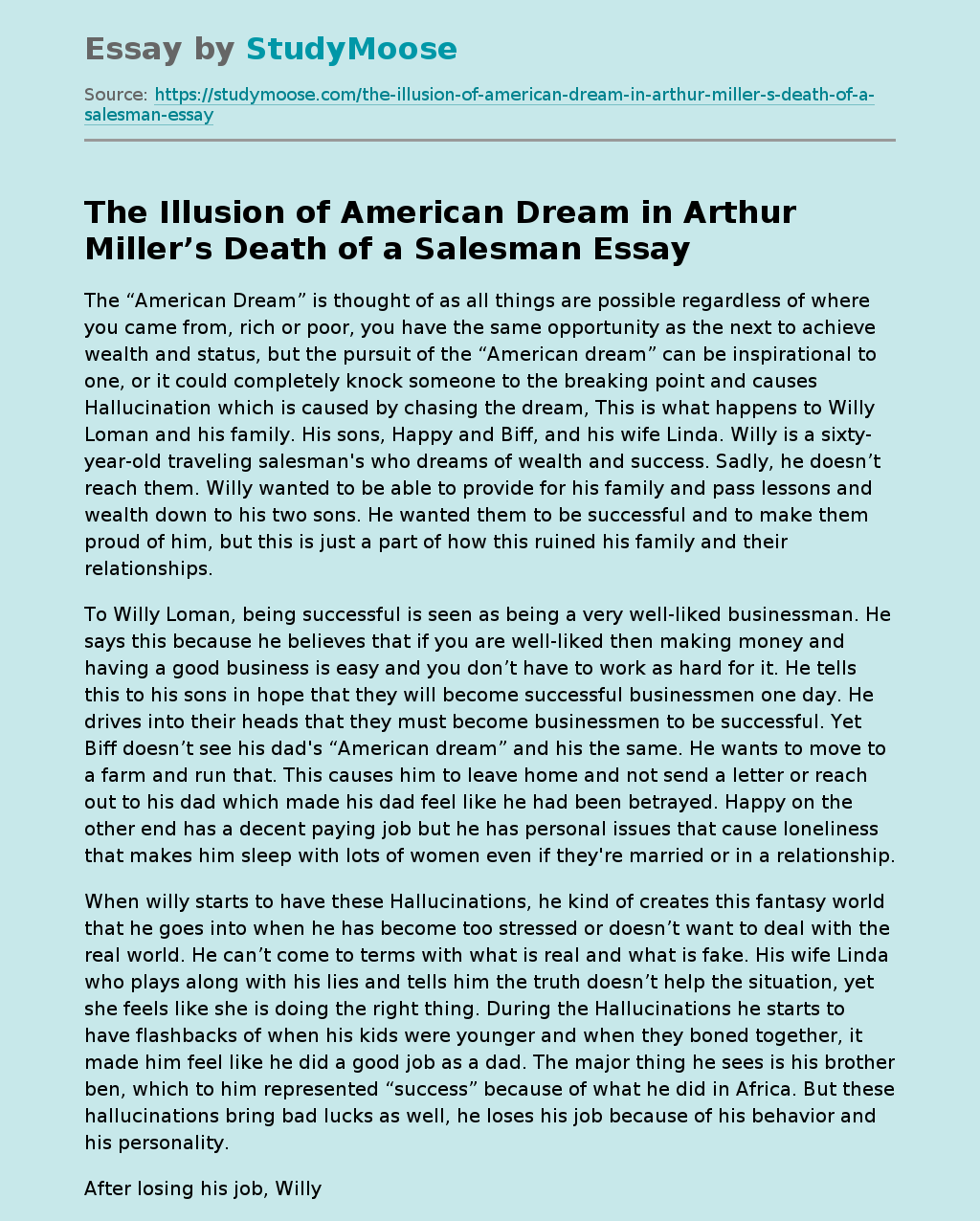