Throughout “Death of a Salesman,” it was very clear to me that the play was an excellent representation of the idea of “The American Dream,” amongst other broader themes. This notion, as I understand it, relates to the belief that there are countless opportunities for everyone to reach out and grasp, no matter who they are or where they come from. The main characters of the play; Willy Loman, Linda Loman, Biff Loman, Happy Loman and their next door neighbour Charley, all seem to have very different ideas about this belief.

Don't use plagiarized sources. Get your custom essay on
“ An Analysis of the Final Scenes of Death of a Salesman by Arthur Miller ”
Get custom paper
NEW! smart matching with writer

In my opinion, this allows the reader (or audience) to relate to whichever character shares their views, making the play very appealing. The play offers a wider insight into a social system in which the Loman family finds themselves. Willy and Linda have had to work incredibly hard to keep themselves afloat over the years, and are justly proud of their achievement of paying off their 25 year mortgage. However, a stark contrast is highlighted between Willy and Howard, his boss.

Willy has worked at the company for his whole career, and even names Howard when he is born for his father.

However, when Howard has grown up he inherits all of his father’s wealth and the company. Also, when Willy turns up to ask for a weekly wage of around $70 per week, Howard says that it was ‘only $100’ for his new tape recorder. Willy laughs along with him, saying that he should get himself one. In terms of the plays portrayal of family relationships, I believe that it offers an excellent incite, showing the effects that an affair can have on a family, and the both emotional and financial pressures that are placed on families.

Biff’s relationship with his father is very volatile, but deep down it is very clear that they both truly love each other. Happy, however, expresses no love or emotion other than shame towards or about his father. This is both highlighted and summed up by the scene in the restaurant when Happy is talking to Miss Forsythe, and says ‘, that’s not my father, that’s just some guy. ‘ Linda is utterly devoted to her husband but can also see, in part, his self-destruction.

However, she almost seems to deny that it is happening by not confronting Willy or doing anything about it herself, especially in relation to the length of rubber pipe behind the fuse box in the garage. The point at which these problems, relationships and pressures are most clear to both the characters and the audience is when the boys return from their abandoned evening with their father to find their mother in a rage. We see a lot of harsh truths realised, the first between Biff and Happy.

In the restaurant, Biff had come to the conclusion that Happy did not really care about Willy’s wellbeing at all, only his own. We see this when Biff exclaims ‘, I sense it, you don’t give a good goddam about him. ‘ When they return to the house, Biff says (“with a flare of disgust”) ‘Go away from me! ‘ In this scene, possibly the biggest revelation is that of Biff and Willy’s true feelings towards each other. When Willy is planting seeds in the garden and talking to his brother, almost in another reality, he is horrified by the thought of Biff thinking of him or talking of him as a coward, should he commit suicide.

When Biff tries to take him inside to talk to Linda and tell her that he is leaving, Willy seems to think that he is talking about telling her about his affair years earlier, which Biff discovered. However, after some considerable arguments, in which Biff is accused of having nothing but spite for his father, Willy realises that Biff actually just does not want to fail him, having been so pressured to succeed in his earlier life. He also sees that all Biff ever wanted from him was pride and love, saying ‘Loves me. Always loved me. Isn’t that a remarkable thing? ‘

An Analysis of the Final Scenes of Death of a Salesman by Arthur Miller. (2017, Oct 05). Retrieved from https://studymoose.com/an-analysis-of-the-final-scenes-of-death-of-a-salesman-by-arthur-miller-essay 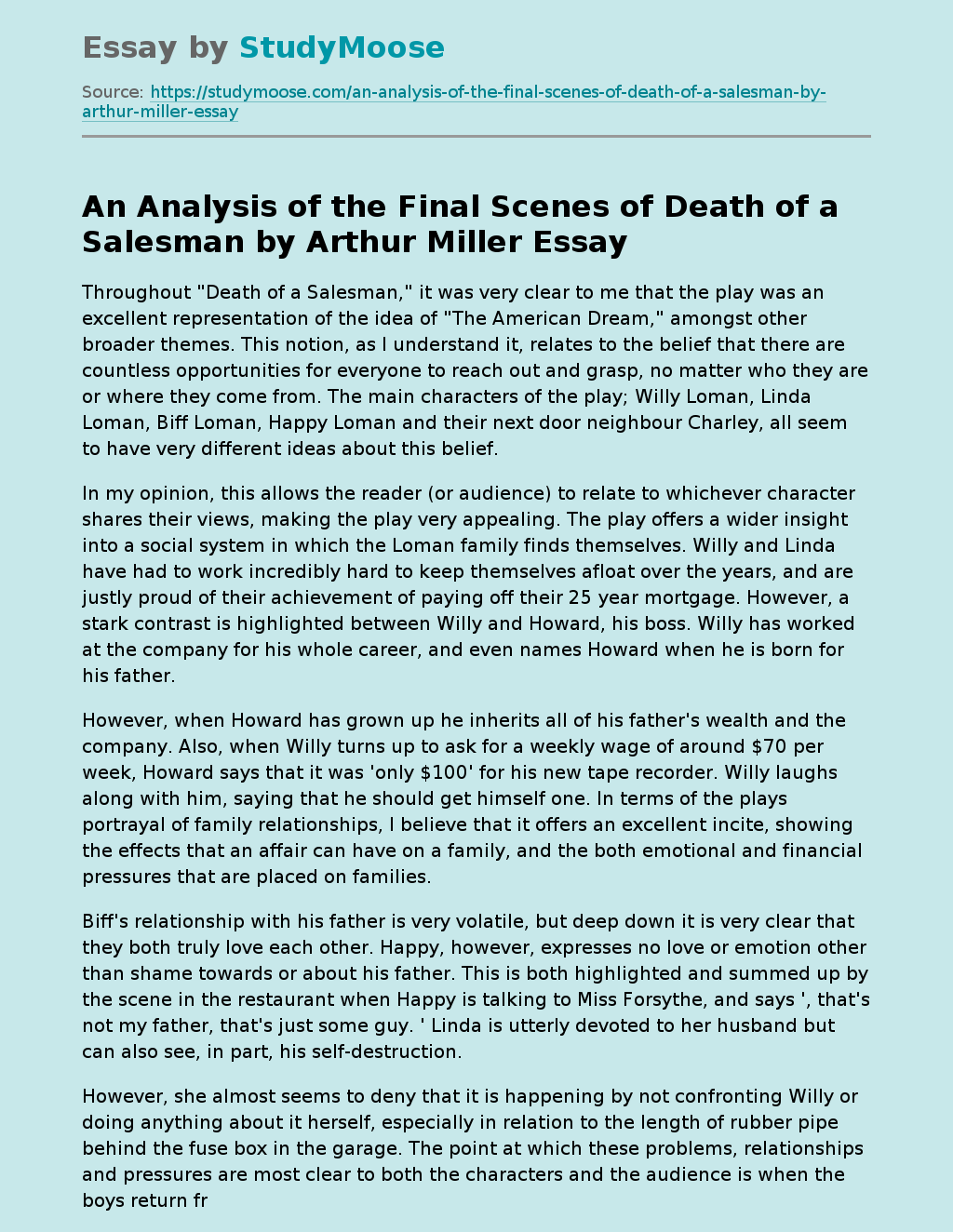