The Idea Of Hamlet's Revenge

Hamlet is a revenge tragedy, typical of many plays written during the late Elizabethan era, such as Shakespeare’s Titus Andronicus and John Marston’s Antonio’s Revenge. We thus expect the plot to follow a predetermined route, and although Hamlet initially appears to be the Typical hero of an Aristotelian revenge tragedy, there are a variety of most unpredictable factors which deviate the play from the norm in revenge tragedies, and consequently augment the sympathy which we have for the tragic hero Hamlet.

Don't use plagiarized sources. Get your custom essay on
“ The Idea Of Hamlet’s Revenge ”
Get custom paper
NEW! smart matching with writer

“How is it that the clouds still hang on you?” These seemingly caring words spoken by Claudius to Hamlet, when Hamlet’s character is first introduced in the play, bring to our knowledge the fact that Hamlet is troubled. Hamlet is grieving the death of his father, donning a “knighted color” in both his mood and dressing and as human beings who understand the pain of death, we pity him. We feel even greater compassion when we discover that he mourns his father’s death alone because everyone else- including his mother Gertrude- appears to have ended their period of grieving.

It is unusual how Gertrude seems to sweep over the subject of the death of his father, stating “… all that lives must die.” Claudius’ negative attitude towards Hamlet’s grieving, using somewhat harsh and insulting adjectives like “impious stubbornness, ‘tis unmanly grief… heart unfortified, a mind impatient” evokes in us further feelings of pity towards Hamlet. Claudius makes Hamlet’s grief appear sinful, saying, “Fie, ‘tis a fault to heaven… a fault against the dead, a fault to nature.

“The repetition of ‘fault’ and the alliteration in “Fie, ‘tis a fault” places greater emphasis on how wrong Claudius interprets Hamlet’s actions to be. The use of lists of three also makes Hamlet’s wrongdoings seem endless, perhaps to make him feel guilty for grieving his father. Indeed it may have been a couple of months ago that King Hamlet died, and a seemingly long time to wear black clothing in grief, but the idea that hamlet has lost his father, is subject to Claudius’ ruthless words and is alone in his grieving makes us sympathize with him.

Shakespeare creates even more sympathy for Hamlet in the audience through the worrying issue of his mother’s marriage to Claudius. Hamlet’s father died merely two months ago, and Hamlet soliloquizes saying, “ere those shows were old/ With which she followed my poor father’s body/ Like Niobe… married with my uncle” Employing the image of shoes getting old and comparing his mother through a simile to Niobe, Hamlet emphasizes how quickly things changed following the supposed intensity of his mother’s grief. Hamlet, like other characters in the play, recognizes the “wicked speed” with which the “o’erhasty marriage” of his mother and uncle follows his father’s death. Horatio, later in the scene, confirms that they “Followed hard upon.” It is also of further note that Gertrude does not get married to just anyone, but the brother of her dead husband. This could be regarded to an extent as incest and Hamlet refers to it with the image of “Incestuous sheets” Hamlet is probably struggling to understand why his mother, who had loved his father so, would act in this manner.

The situation results in his misogynist disposition, metaphorically saying, “Frailty, the name is a woman” and his consequent distrust of all women as can be interpreted from his treatment of Ophelia later in the play, The issue of succession to the throne of Denmark is also one which may arouse the suspicion of the audience of Hamlet’s behalf. Hamlet’s father was king of Denmark, and on his death, we would expect that Hamlet, as his son, would succeed him. On the contrary, Claudius is made king. Thus, not only do we share Hamlet’s sense of outrage ar his father’s death, but we are also pained that he does not wear the crown. However, it is important to note that the reason for Claudius’ succession is that Denmark, in fact, practiced an elected monarchy rather than a hereditary one, and thus Claudius was elected as the next king. Roland Frye points out that this fact is kept from the audience by Shakespeare till the fifth act, so as to exploit dramatically an important point in official Elizabethan political doctrine- that armed resistance was unlawful in the case of a tyrannical hereditary monarchy, but not in an elected monarchy. Some critics argue that Claudius was elected by the people and deserving of the throne as he is an astute politician, shown by his sending of ambassadors Cornelius and Voltemand to resolve the conflict with Norway. Others argue, however, that Hamlet was absent during the elections for the next monarch following his father’s death, and thus was unfairly deprived of being crowned king. They believe had hamlet been present he would have been elected King, as he was popular with the people, proven by Claudius’ statement later in act 4 that Hamlet is “loved of the distracted multitude.”

The Idea Of Hamlet's Revenge. (2020, Oct 11). Retrieved from http://studymoose.com/the-idea-of-hamlets-revenge-essay 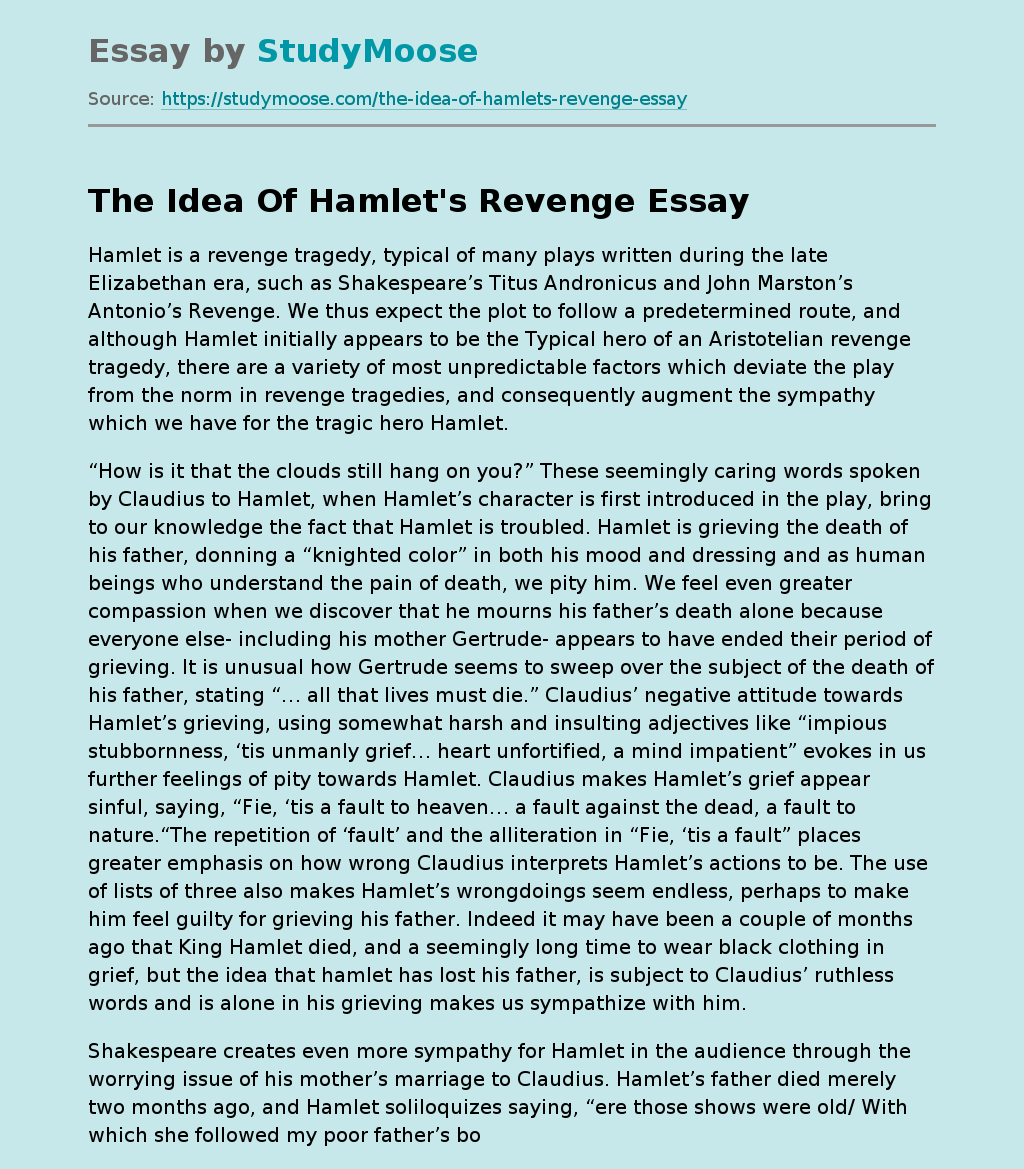