The Idea of an 'Outsider'

The idea of an ‘outsider’ is a rather common concept within literature, and such a strong opposition from other characters, dooms Othello to be a permanent outsider, consequently making him a tragic figure. Iago maliciously uses zoomorphism in order to describe Othello as a ‘black ram’ and paradoxically compares him to a ‘white ew’, not only expressing his distaste by demoting Othello to a beast, but introduces the racial connotation of black versus white, therefore presenting a Jacobean audience (of which would have most likely shared the same racist feelings) a justification to why Iago feels a certain way about this character.

Don't use plagiarized sources. Get your custom essay on
“ The Idea of an ‘Outsider’ ”
Get custom paper
NEW! smart matching with writer

Due to the fact that a Jacobean audience would acknowledge the aggressive creature that is a ‘ram’, as a position below that of humanity in the Great Chain of Being, Shakespeare ensures to clearly underscore the idea that Othello is lesser, therefore outlining him as creature destined to be outlawed. Through this particular animal, Shakespeare depicts the image of a horned devil to an audience, automatically allowing observers to perceive Othello as evil, and morally wrong.

Othello is therefore not only presented as an outsider, but as someone who is demonic, which at the time the play was written and performed, was a very serious accusation. Characters within the play, very easily express their discriminatory opinions on Othello, as they successfully aim to single him out, allowing an audience to view him as an outsider. Through the racial slur ‘Moor’, used to describe Othello multiple times, one could suggest that he is an outsider not only to those whom he lives with, but feasibly within society.

Barthelemy notes that the ‘overwhelming majority’ of black characters presented on stage ‘between 1589 and 1695 endorsed, represented, or were evil’ which withholds truth when comparing Othello to other texts containing ‘The Moor’ written during this time period such as George Peel’s ‘Battle of Alcazar’ (1954). Peel presents the protagonist within this tale, as a Machiavellian politician, who is cruel, treacherous and evil. Peel expresses that these barbaric features are directly accompanied with the blackness of his skin, therefore representing the immorality of ‘The Moor’. As religion obtained such a large part of a Jacobean society, Shakespeare would have been aware that by using this metaphor, he could undoubtedly cause an audience to share Iago’s disgust of this character, allowing a collective illustration of hostility towards Othello’s ethnicity and the miscegenation that he is part of. In addition to this, by Shakespeare placing both ‘black’ and ‘white’ within the same sentence, he allows for an explicit contrast between what could have been viewed to the particularly religious audience members, as sin and purity.

The Idea of an 'Outsider'. (2019, Dec 09). Retrieved from https://studymoose.com/the-idea-of-an-outsider-essay 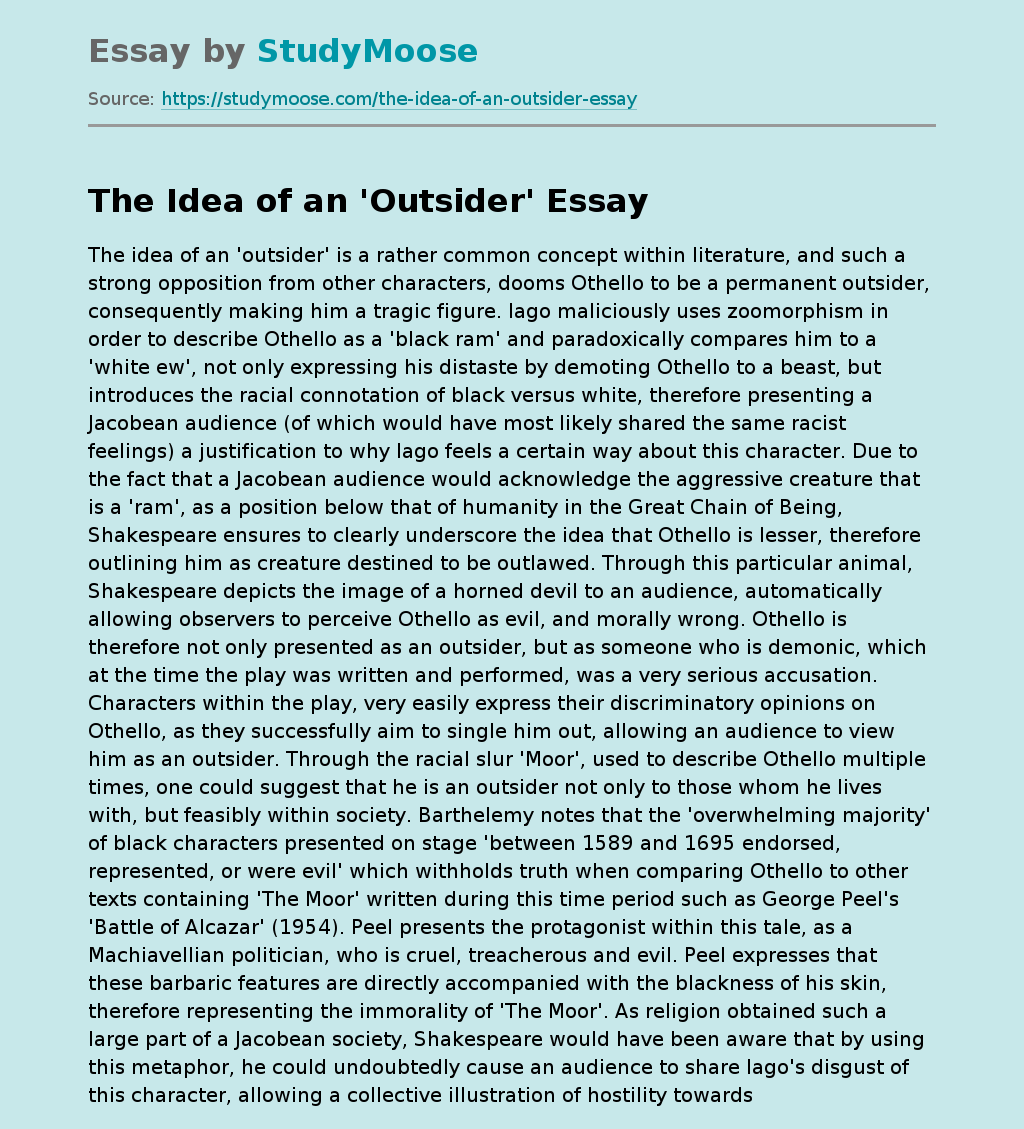