The ID, Ego and Superego in Lord of the Flies

Freud primarily subscribed to the idea that there are two energies that drive human behavior. These two energies are sex – the pleasure principle and aggression. The human mind is comprised of the conscious, preconscious, and unconscious. Within the realms of the mind, the human personality is controlled by the id, the ego, and the superego. The id is driven by the pleasure principle. The superego is the instinctual moral good, which aims to please the ego ideal, or the magnified moral values.

The ego interacts with both the id and the superego and aims to please both components (Connors). William Golding’s Lord of the Flies embodies Freud’s psychoanalytic theory. Golding utilizes the characters of Jack, Piggy, Simon, and Ralph to personify the id, the ego, and the superego, respectively.

Jack is a prime example of Freud’s id. Much like the id, Jack cares about survival as opposed to rescue. The id focuses on immediate and primitive pleasures as opposed to a long-term plan.

Jack shows no interest in a signal fire and instead spends all of his time hunting. He thrives upon control. He does not support the rules established and tries to be a totalitarian leader. Numerous times throughout the novel, he attempts to turn the boys against Ralph, the original head chief. “Bollocks to the rules! We’re strong – we hunt! If there’s a beast, we’ll hunt it down! We’ll close in and beat and beat and beat–!” (Golding 79). He controls the boys, kills animals, and aids in killing Simon and Piggy.

Jack ultimately overpowers Piggy and Simon, by aiding and abetting in their deaths, much like the id can overpower the superego.

Throughout the novel, Jack solely cares about his own pleasures. His first priority is hunting pigs and getting meat. He enjoys the idea of catching, controlling, and killing a pig. Jack’s tribe focuses on killing and on the pleasure principle. “Jack was on top of the sow stabbing downward with his knife…The spear moved forward inch by inch and the terrified squealing became a high-pitched scream. Then Jack found the throat and the hot blood spouted over his hands,” (Golding 120). Jack’s need to kill and please his own desires comes to fruition in the scene with the sow. He proves to the other boys that he will stop at nothing to carry out his own needs much like the id aims to take over the thoughts in a human’s mind in order to please its own desires.

The superego embodies human nature. Its aim is to carry out an instinctual moral good. Piggy personifies the superego’s responsibility to carry out societal standards. Piggy aims to be a voice of reason, but is only able to do so with the help of Ralph, the chief. The superego’s wishes, like Piggy’s wishes, can only be expressed through the ego. Piggy engages societal standards and presents the only adult figure in the novel by reciting the words of his auntie. The superego often acts as the character angel on one’s shoulder that guides a person to do what is morally right. Piggy consistently advises Ralph to do the right thing for the tribe. Whenever a significant event takes place on the island, Piggy is there. Piggy helps Ralph summon the first meeting, his glasses light the main bonfire, he witnesses Simon’s death, and so on. Piggy time and again assists in bringing a voice of reason to every situation. “Piggy’s role—as man’s reasoning faculties and as a father—derives some of its complexity from the fact that the fire which the children foster and guard on the mountain in the hope of communicating with the adult world is lighted with his glasses,” (Rosenfield). Piggy also challenges Jack, which ultimately leads to his demise. Piggy’s involvement in representing the superego is focused on the societal needs and helping to push Ralph into the right direction.

Simon epitomizes the super ego. Simon watches over the boys and wants to help everyone. He employs both societal and moral rules. He attempts to show the good nature of the civilized and uncivilized boys on the island. Simon is the one boy who never participates in destructive behaviors and always contributes to the well being of the boys. He continues to work even after everyone stops, gives Piggy food when no one else will, and speaks his mind about the beast. He is also the only one to realize that the true beast is inside the boys. Simon’s moral compass, much like the superego, allows him to see the evil of mankind. Simon is whole-heartedly good. The superego attempts to lead a person to the morally right pathway, much like Simon aims to show Ralph how he can do what’s best for the tribe. The primitive nature of the others overpowers Simon’s internal good nature. Even after his death, Simon’s moral nature lives on through the boys similar to how the superego can continue to shine after a person follows the desires of the id.

Ralph’s character embodies the ego. The ego is the rational aspect of the mind. Ralph’s rationality is exhibited in his role as leader. He focuses on the idea of being rescued and organizes the fires as a mode of getting the attention of a rescue ship. He works on building shelters for the members of the tribe. He attempts to keep meetings organized and establishes the role of the conch to keep order. Ralph makes the decisions for the good of the group. He holds debates and always aims to have the group stick together, despite Jack’s constant attempts to break the tribe apart. Most importantly, Ralph continues his role chief regardless of how he feels, because he knows he makes a better chief for the group than Jack could ever be.

Furthermore, the ego, like Ralph, referees between the instinctual needs of the id and the societal needs of the superego. The ego is the only facet of the mind that interacts with both the conscious and the unconscious. Ralph consistently acts as the democratic figure that tries to keep the id and superego under control. Ralph’s duty as chief is to keep the boys as a civilized society on the island. Like the ego, Ralph must look at different situations and determine what is the best option to take at that moment. Golding puts Ralph into situations where he must choose between pleasing Jack or doing what Simon suggests is best. Ralph, as leader of the tribe, attempts to be the best human he can be and often follows the guidance of the superego; although, like every person at one point or another, Ralph does succumb to the primitive desires that Jack embodies. Ralph first gives in to the pleasure of hunting. He later falls down Jack’s pathway when he aids in killing Simon. He immediately regrets this and remembers all that Simon taught him. From this point forward, Ralph tries to listen to his moral compass.

Ralph is the ultimate balance between good and evil. “Ralph is every man—or every child—and his body becomes the battleground where reason and instinct struggle, each to assert itself. For to regard Ralph and Jack as Good and Evil is to ignore the role of the child Piggy, who in the child’s world of make-believe is the outsider,” (Rosenfield). Ralph’s role as the ego perfectly portrays how the ego must always balance the id and the superego. Jack’s selfish desire for hunting and control epitomizes the id’s constant need to seek pleasure. Piggy and Simon’s total unselfish sacrifices and aim to lead Ralph down the morally right pathway solidify their roles as the superego. William Golding’s Lord of the Flies personifies Freud’s psychoanalytic theory that the mind can be seen as the id, the ego and the superego. Golding’s use of Jack, Piggy, Simon, and Ralph to represent the id, the ego, and the superego places the abstract roles of Freud’s theory onto concrete subjects that the reader can judge, befriend and connect with.

The ID, Ego and Superego in Lord of the Flies. (2016, Feb 20). Retrieved from http://studymoose.com/the-id-ego-and-superego-in-lord-of-the-flies-essay 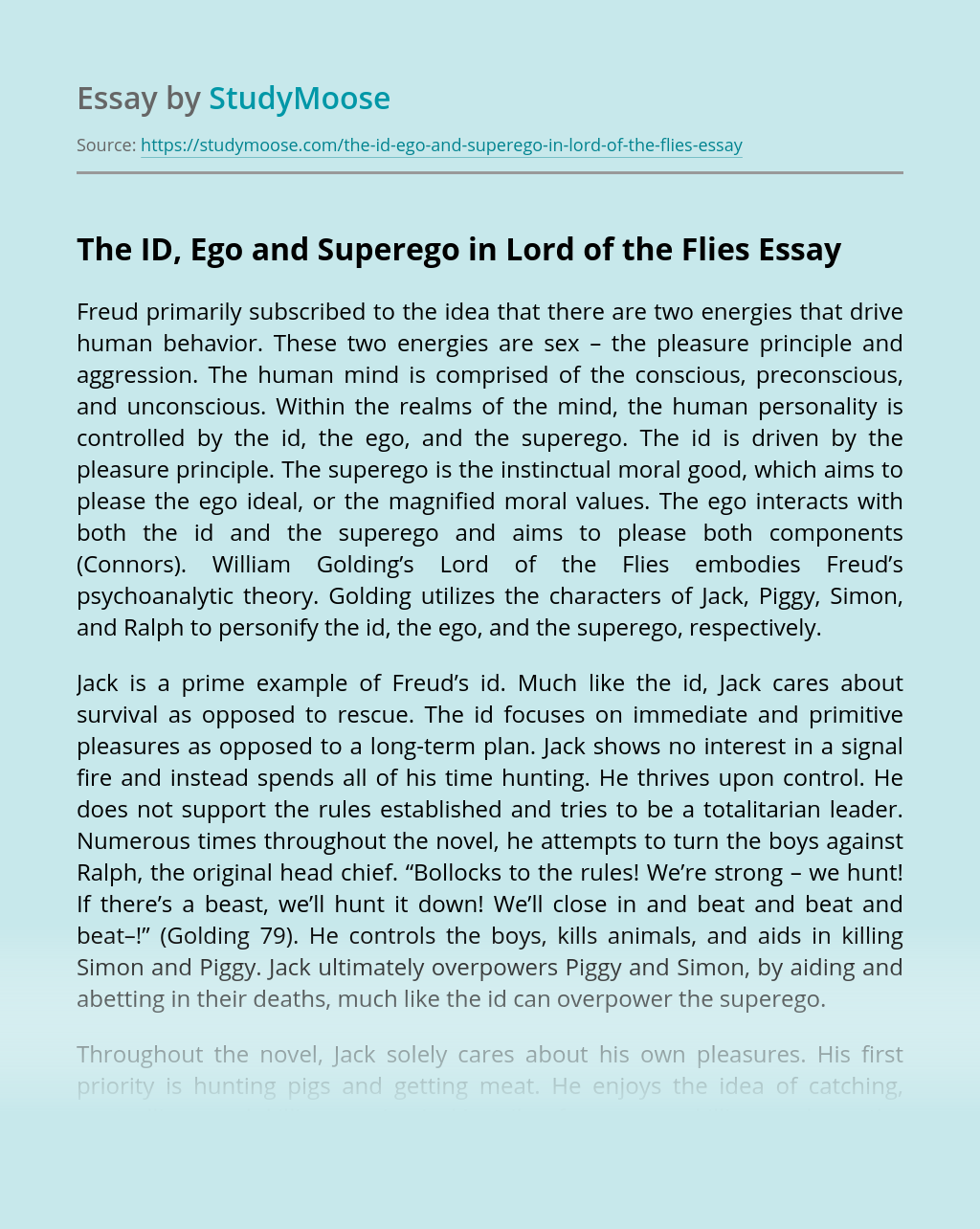 Don’t waste time
Get a verified expert to help you with The ID, Ego and Superego in Lord of the Flies
Hire verified expert
$35.80 for a 2-page paper
Stay Safe, Stay Original