The Hunger Games Mockingjay by Suzanne Collins is the final book

The Hunger Games Mockingjay by Suzanne Collins is the final book in The Hunger Games trilogy, and carries the resolution to the previous books and quite importantly the answers to the end of the second book (Catching Fire). Mockingjay gives the real feel of life within a war, where nothing is the same and you’re haunted by the memories of two Hunger Games.

The book is written by Suzanne Collins, who was Born in Hartford, Connecticut, in 1962, Suzanne Collins was the daughter of an Air Force pilot, and her family moved several times when she was young.

Don't use plagiarized sources. Get your custom essay on
“ The Hunger Games Mockingjay by Suzanne Collins is the final book ”
Get custom paper
NEW! smart matching with writer

The novel begins by explaining the horrible war with the Capitol that left District 13 with little to no resources or living people .

But against all odds, the people of District 13 manage to find a way to be self-sufficient beneath the surface of the earth building an entire empire underground. Amid this bizarre living condition, a rally unfolds above ground, district by district, as plans are strategically put in place to launch the ultimate war against President Snow and his men. There is nothing less than a great amount of mental, and physiological w wars that cause much anger and confusion among all leaders of the Panem.

While Katniss tries to connect the dots between her position as the Mockingjay, the relationships she can trust and the love she has for both Peeta and Gale, a much more impulsive side to her emerges. In the last few chapters of the book, she emerges as an assassin herself and takes matters into her own hands killing District 13’s leader.

Suzanne Collins skilfully details the process of developing the revolution, bringing hope to the reader and courage while helping the read piece together the puzzles from the previous two books. Mockingjay is the reconciliation of civilisation portrayed in The Hunger Games and Catching Fire As much as it is the designation of an ill-fated dystopian society. Collins allows the chain of events to unfold very quickly in the plot, accurately reflecting a real-time sense of war. In all the suspense that Collins leaves, there is no stone unturned. All our questions that we ask in the beginning of the book (even the previous books) are answered by the time we finish the story.

Corruption inevitably invades what’s left of humanity’s innocence as war against the Capitol is waged and fan favourite characters are pulled into the centre of controversial choices. New characters are also introduced as Collins intelligibly gives answers to previously asked questions throughout the book. Every chapter of the book is tied together with original material and powerful creativity. In the end, the final instalment of the trilogy allows us to live through the tragic and horrible consequences of war, the reunion of lovers and the rebirth of hope for the future of panem.

If the success of a story depends on the author’s ability to draw readers in, place them in the shoes of the characters and take them on a surreal, emotional journey, then Collins surely succeeds. Mockingjay easily paves the way for readers to easily read this book without the reader feeling burdened or overwhelmed by the outrageous realities of this horrific violence. But with all that said, Collins also manages to resolve the trilogy with a whole-hearted satisfaction for readers. With both tragedy and hope throughout the entire book, there is a sense of peace with the resolve that Collins writes of – not just as the resolve of the book itself, but the resolve of the trilogy.

This book was truly a great read, as Collins makes the experience of reading dystopian-fiction so easy, as the book is just so fast paced, and exciting, making it almost impossible to be bored of this novel. It answers so many key elements from previous books in the trilogy, that make the book even more excitable.

The Hunger Games Mockingjay by Suzanne Collins is the final book. (2019, Dec 06). Retrieved from https://studymoose.com/the-hunger-games-mockingjay-by-suzanne-collins-is-the-final-book-example-essay 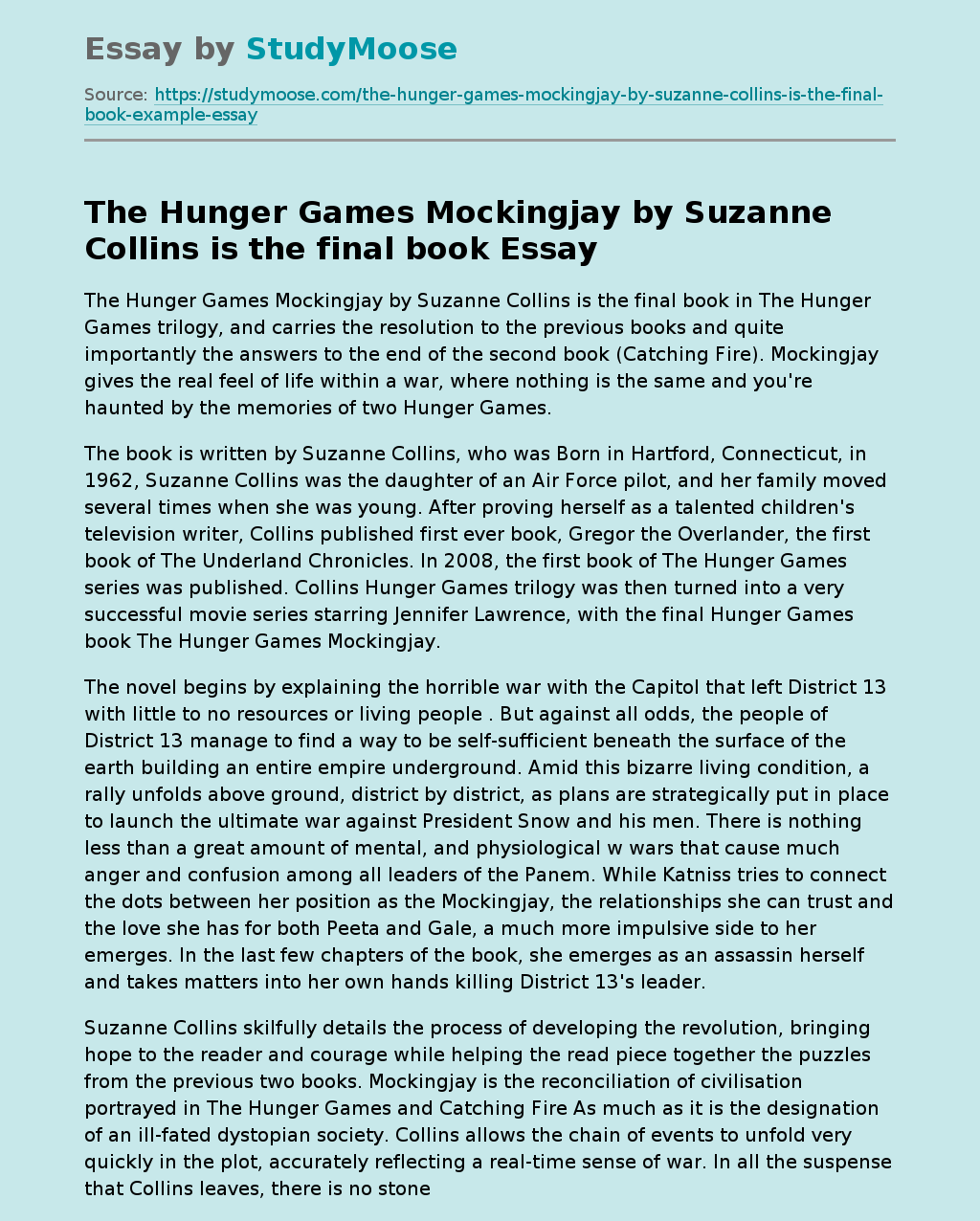