"The Horizontal World" by Debra Marquart

This passage taken from the memoir, The Horizontal World, written by Debra Marquart, is an excerpt that demonstrates Marquart’s indirect expression of love for the Midwest. Through her development of changing tones, which is propelled by diction and an appeal to ethos, she is able to advance her message about the unknown yet special qualities of the Midwest.

Don't use plagiarized sources.
Get Your Custom Essay on “The Horizontal World” by Debra Marquart Just from $13,9/Page

Debra Marquart uses a change of tone from the beginning of the passage to its end in order to juxtapose the two contradictory perspectives of the Midwest. Marquart clearly shows this variation through the dull and colorless diction in the beginning of the essay, which then transitions to a hopeful and suspenseful use of diction.

For instance, she illustrates the drab background of the Midwest as she states, “…you’ll encounter a road so lonely, treeless, and devoid of rises and curves in places that it will feel like one long-held pedal steel guitar note”, which is then juxtaposed to the description in the last paragraph where she exclaims, “They traveled to the Midwest by train to what was then the end of the line—Eureka, South Dakota.

Eureka—from the reported to have been the word that Archimedes cried when he found a way to test the purity of Hiero’s crown. My grandparents wouldn’t have known the etymology of the word, but they would have felt it, the anticipation…”

Marquart’s change in tone from an illustration of the Midwest as drab and boring to a hopeful and bright description with the use of the words, like “purity” and “anticipation” as well as the historical allusion to Archimedes, drives her argument by helping her to further differentiate the common or “typical” views associated with the Midwest and its undiscovered value and beauty. It is through this progression from one tone to another that the author is able to distinctly show the readers that despite the preconceived judgments held against the Midwest, in reality, the views regarding the Midwest are not single-sided; rather they vary like the many faces of a dice.

Furthermore, another device that is used throughout this essay is an appeal to ethos. The constant reference to surveyors and opinions from professional writers and poets are shown consistently throughout the essay. One example is when Marquart quotes the opinion of Sylvia Griffith Wheeler, the author of the poem “Earlthlings”, when she states, “We are the folks presidents talk to when times require…”

“The Horizontal World” by Debra Marquart. (2016, Sep 19). Retrieved from https://studymoose.com/the-horizontal-world-by-debra-marquart-essay 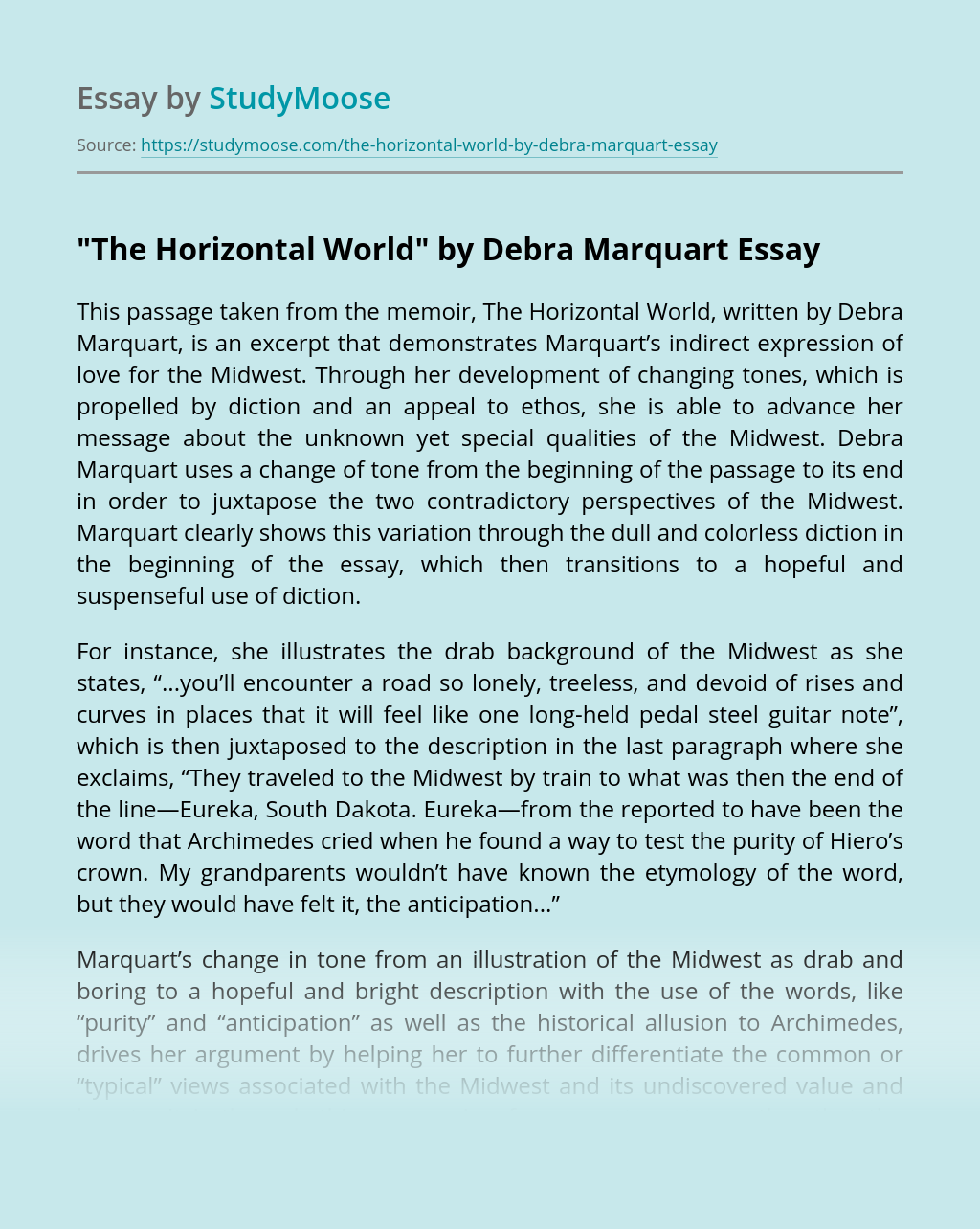 In the past, certain individuals have been able to gain complete control over society and have a negative impact on it. The late 1600’s and mid 1900’s were times of chaos and political hysteria in America which were caused by rumors started by very powerful people, resulting in the deaths and imprisonment of several innocent...

Martha Coston was born in Baltimore in the year of 1826. She was left with four children to take care of after the death of her husband. This happened when she was only 21. Even though her husband was now gone she was determined to make money so she could raise her precious children. She...

This assignment is a three page essay critique over a two dimensional work of art. As you have learned in the first chapter, a critique often involves both a formal evaluation of the work (based on its physical appearance) and a contextual critique considering the artist’s style, intention, and historical time period. You will consider...