The History of Anime Speech

Hello and good morning everyone, my name is Kyla Xiong.

Now I want you guys to imagine this: life in a dystopian world where all around you, there are tall walls protecting your town. You’ve lived your entire life believing that they would protect you, yet also questioning how long. Then one day they crumble. ‘On that day, mankind received a grim reminder. We lived in fear of the Titans and were disgraced to live in these cages we called walls'(“A Quote from Attack on Titan, Vol.

Don't use plagiarized sources. Get your custom essay on
“ The History of Anime Speech ”
Get custom paper
NEW! smart matching with writer

1.”). This quote gathered from goodreads.com is from an anime called Attack on Titan. Fortunately, we don’t have to live in this kind of world. But what I love about anime is how easily you can get sucked into it. It’s different from the standard of cartoons that we watch in America. Anime has deeper storylines, characters, and a different feeling.

That is why today my informational speech will be about the history of anime.

In this speech, I’m going to talk about the brief history of anime, the popularity of anime in the U.S., and a popular and favorite anime of mine, Attack on Titan.

For my first topic, I’m going to talk about the brief history of anime.

First off, what does anime mean and where does it come from? According to rightstufanime.com, anime means animation and when we hear it, we usually refer to Japanese animation. When anime first started, it was drawn with chalk and printed on ‘flimsy’ and flammable films (Cooper).

This made it hard to preserve the animation for a long time. They were also really short films around five minutes long, but the typical process of these animations would be made by erasing and re-drawing in between camera takes (Cooper). One of the earliest films, produced in 1917, is called ‘Dekobo’s New Picture Book – Failure of a Great Plan’ (Cooper). Although anime is really popular today and brings in a lot of revenue, back then it was harder to make a living in this field. In addition, openculture.com states that animation was used as one way to modernize early Japan. Animations also didn’t have sound but relied on performers known as benshi to narrate them on the side. Unfortunately, a majority were lost due to earthquakes in 1923 (Crow).

Although we would imagine that most early animation was created for entertainment, they were usually produced for propaganda at the beginning of World War 2. Thoughtco.com states that after World War 2, the ‘first modern…animation’ company called Toei was created. They would continue to create many ‘adaptions of popular manga’ such as ‘Sally the Witch’ by Mitsuteru Yokoyama and Tetsujin 28-go (Yegulalp).

Further, in the production of anime, novaonline.nvcc.edu states that one of the greatest and earliest anime series to be created was by an artist named Osamu Tezuka who succeeded with ‘Astro Boy’. He was inspired by Disney, French and German cinema. When it became popular, he created his own production company in 1962 called Mushi Productions (Zagzoug). It then became popular in the U.S. by 1963. This was also when people started recognizing more of his art style and animation. He is nicknamed the father of manga and anime (Zagzoug).

What makes Osamu’s anime so different is that he used a ‘limited-animation’ style, according to tofugu.com. This style helped speed up the process, cut costs, and make animation ‘feasible’ for T.V (Satsumaimo). The full animation process that Disney and other Japanese studios used weren’t efficient because they would use cels, or transparent sheets, to draw, layer, and then take a picture. Osamu’s realization was that animation didn’t need to be ‘fully animated’ (Satsumaimo). Astro Boy was made re-using cels, ‘visual and audio tricks’, and ‘fewer frames of animation to create an illusion of full motion’ (Satsumaimo). This eventually became a standard for anime.

Anime started to expand in the 1970s when T.V. became more popular. Thoughtco.com states T.V. allowed animators to experiment with different styles of drawing and anime genres. The most popular genre in early anime was ‘mecha’, or ‘anime dealing with giant robots or vehicles’ (Yegulalp). The first example of this is Tetsujin 28-go and Mobile Suit Gundam. Later in the 1980s, more animation studios were established such as Studio Ghibli and GAINAX (Yegulalp).

In the mid-1900s, Japanese animations were exported to the U.S. and grew more popular with the entire world. Anime wasn’t just made and limited to the Japanese audience. It became more accessible with the help of English dub and subtitles.

Next, I will talk about the popularity of anime in the U.S.

Rightstufanime.com states that Fred Ladd, an American producer, helped lead the popularity of anime by introducing it through NBC. Family Home Entertainment started to provide English dub for anime. They first ‘tested the waters with their Captain Harlock adaption’ (‘History of Anime in the US’). At first, there were troubles. Only some of the dubbing was accurate and ultimately would ruin the show.

From reelrundown.com, the top five ranked anime in the list of the top 17 ‘Most Significant Anime in the United States’ are Pokémon, Sailor Moon, Naruto, the Dragon Ball franchise, and Yu-Gi-Oh, although it can differ based on one’s opinions.

Naturally, fans often cosplay as the characters, buy anime merchandise, and attend anime conventions to show their love and support.

Finally, I’ll talk about one of my favorite anime series, Attack on Titan Based on the information from myanimelist.net, there are over 42,000 anime series and movies.

Lastly, out of those 42,000+ anime, I would like to talk about an anime called Attack on Titan, or in its original Japanese title ‘Shingeki no Kyojin’. It was released in Spring 2013, according to myanimelist.com, based on an eight-volume manga created by Hajime Isayama, and produced/licensed by Wit Studio and Funimation. In short, this anime is about humanity living behind walls in fear of titans and the outside world. They are also fighting for their survival and recovery against these titans as the walls fall down (“Shingeki No Kyojin.”). The main characters are Eren Jaeger, Mikasa Ackerman, and Armin Arlert. It is a gruesome and gory anime, so I wouldn’t recommend it to anyone who can’t handle it. However, the reason why I really enjoy this show is because of the characters who are willing to fight, even to their deaths, to save and recover their homes, the unique story of each character, and the surprising turn of events. There are two seasons and a third season continuing in Spring 2019.

One thing that I wanted to show you guys today is a piece from my Attack on Titan cosplay outfit. This is just the jacket, which the Survey Corps wear. The Survey Corps is a special team, with facing the most risk and ‘only a 50% chance of surviving’ that is ‘in charge of exploring and reclaiming territory lost to the Titans’, which I got from tvtropes.org. Specifically, I bought this from a website, miccostumes.com, a few years ago and the whole outfit was almost $200. As you can tell, cosplaying is very expensive, whether you’re making it yourself or buying it. I specifically bought a Mikasa Ackerman cosplay outfit and her trademark look is her red scarf, which she received from Eren Yaeger in season one, episode 6 after being saved from child kidnappers, as described from attackontitan.fandom.com. I also brought a Levi Ackerman figurine gifted to me by a friend. Also, from tvtropes.org, Levi is named ‘the strongest soldier alive’ and helps lead the Survey Corps (“Attack on Titan: The Survey Corps / Characters.”).

Today, I talked about the history of anime, the popularity of anime in the U.S., and one of my favorites, Attack on Titan.

Now when you see someone mention anime or watch it, do yourself a favor and don’t call it a cartoon. You’ll offend someone. Other than that, I hope you’ll go out of your comfort zone, watch something new, and learn more about anime. Thank you.

The History of Anime Speech. (2021, Aug 07). Retrieved from https://studymoose.com/the-history-of-anime-speech-essay 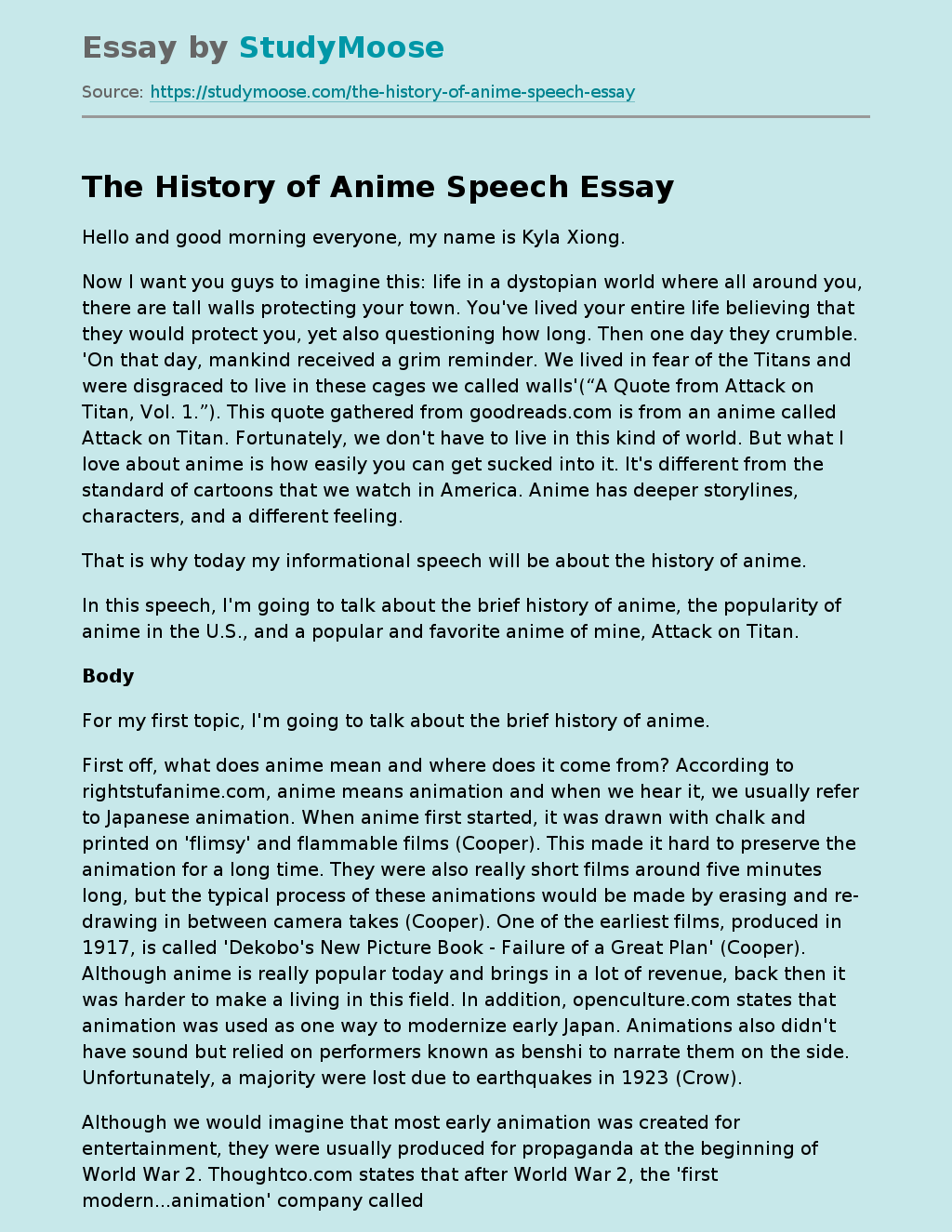