The Hate U Give emphasizes the different struggles that Starrthe

The Hate U Give emphasizes the different struggles that Starr-the main character and narrator of the book- have in her community and herself. She describes police brutality and racism. Starr witnesses the murder of a childhood best friend by the hands of a white officer and struggles with fear and guilt as she makes her way of fighting for what is right. She also relates how she acts differently in her “two worlds”; making her not be herself. Her community is recognized for its majority of citizens being black and having issues with drug-dealing gangs that frighten the community.

Don't use plagiarized sources. Get your custom essay on
“ The Hate U Give emphasizes the different struggles that Starrthe ”
Get custom paper
NEW! smart matching with writer

Also, police brutality is so real that Starr’s parents Maverick and Lisa taught their children to recite the Black Panther’s Ten-Point Program. This would teach them how to behave in the presence of a police officer. Also, for the kids in this community named Garden Heights, it means life or death knowing the Ten-Point Program. Discrimination and racism are shown early in the novel when Khalil is stopped by one-fifteen (a white officer) for a traffic stop and then shot to death without being a threat to anyone.

Starr is terrified by witnessing his death, but the officer still points his gun at her until backup arrives. Black people and even children are viewed as a threat, no matter who or how they are. Starr is also conflicted when the media tries to use Khalil’s death to call him a thug and give officer one-fifteen a reason. Later on, One-Fifteen’s father appears in a news segment trying to gather sympathy by presenting his son as a good man and as a person who feared for his life.

Also, the media once more wants to create an impact and present Khalil as a drug dealer to exonerate one-fifteen’s action, captivating Starr’s attention. To add on, Kenya-Starr’s friend- convince Starr to declare and express the media and public the truth about what truly happened. This shows that Kenya wanted Starr to speak for what is right and to not keep her voice for herself. However, Starr served as witness for the DA, but when the results were shown people from the community and Starr herself started to take more action. The DA had concluded the investigation exonerating officer one-fifteen of any punishment. This created anger and remorse in Starr, but finally, she understood that life is not always fair. She also understood that she had to keep fighting for what is right and to never give up on the truth.

The Hate U Give emphasizes the different struggles that Starrthe. (2019, Nov 24). Retrieved from https://studymoose.com/the-hate-u-give-emphasizes-the-different-struggles-that-starrthe-example-essay 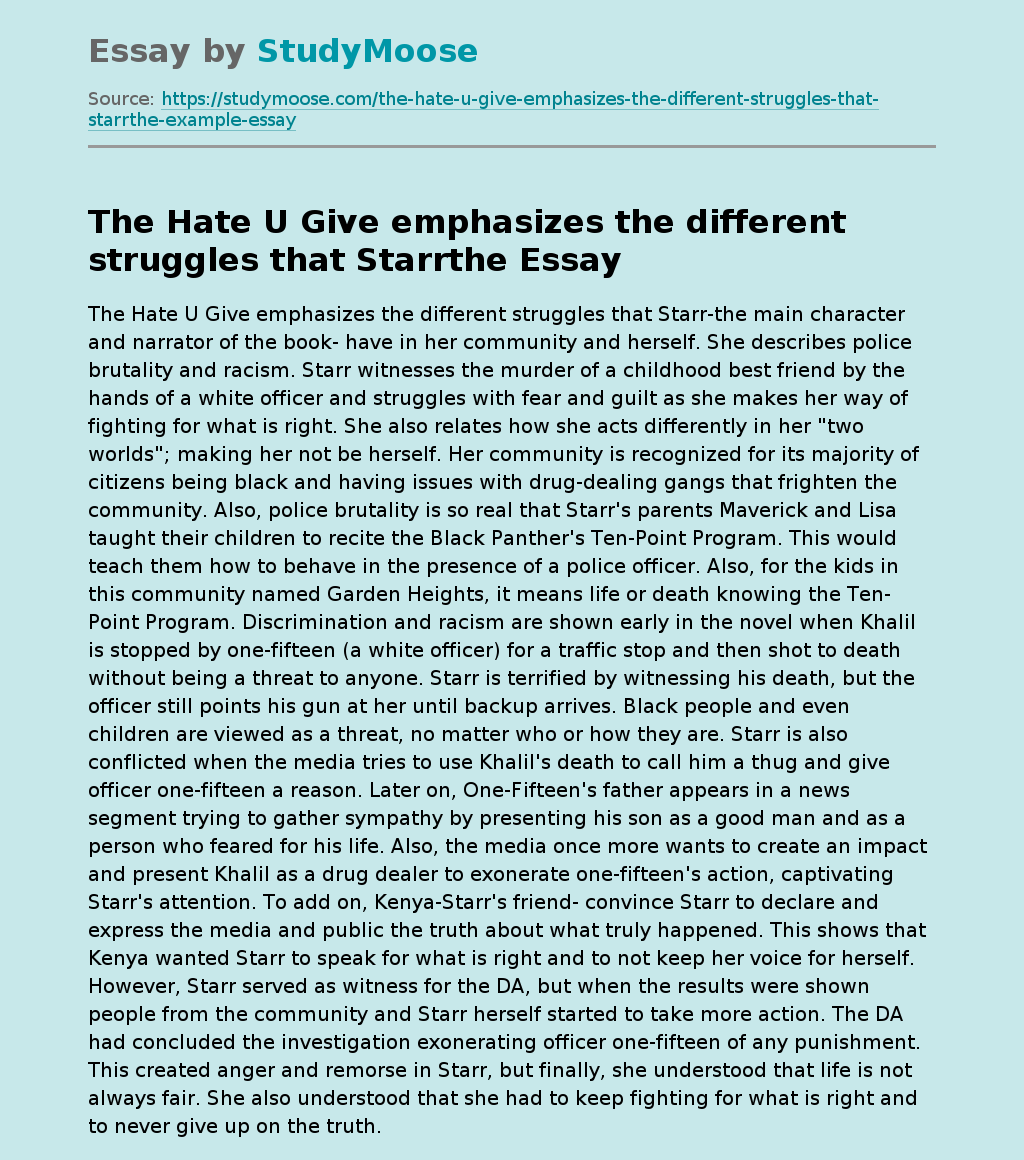