In the novel The Handmaid’s Tale written by Margaret Atwood, she uses her characters and their journey ‘s throughout the narrative to depict controversies of a woman’s role in society which she has previously encountered.

The story consists of a dystopian society called Gilead that is made up of people with specific functions and requirements they must execute, or else, will be faced with brutal consequences. Atwood explores the role of women within Gilead as a way to criticize a male-driven hierarchy through the use of metaphors, first-person narration, and the mention of context to portray the themes of woman reduced to their reproductive system, traditional values, and feminism.

Don't use plagiarized sources. Get your custom essay on
“ The Handmaid’s Tale by Margaret Atwood: Analysis ”
Get custom paper
NEW! smart matching with writer

The whole novel is narrated and lead through the eyes and thoughts of Offred, a handmaid; fertile women who were captured and taken against their will, then assigned to high-ranking men in Gilead with the role to bear children for them. A recurring theme found across the novel is that more than one kind of freedom exists, as Aunt Lydia described it, In the days of anarchy, it was freedom to.

Now you are being given freedom from. Don’t underrate it. (24). She illustrates the idea that the freedom Gilead offers possesses an advantage for women, supposedly guaranteeing the freedom from sexual violence and respected for their fertility.

However, for a handmaid to fulfill her role of bearing children, a monthly Ceremony is required in which the handmaid is raped by the Commander, conveying a paradoxical situation. Atwood exhibits this self-contradicting side of Gilead ‘s system to critique the fact that traditional cultural values and conservative opinions should not be considered solutions to fix a society as some believed in the late 1900s.

Atwood portrays women as being reduced to their reproductive function and are obligatorily confined in a household under the orders of a man without the right to read or write, pointed out by Offred, The Bible is kept locked up, the way people once kept tea locked up, so the servants wouldn’t steal it. It is an incendiary device: who knows what we’d make of it, if we ever got our hands on it?.

By describing the Bible as an incendiary device, she depicts the extent of danger a bible may hold in the hands of a woman due to the powerful words it contains. She uses this description to delineate an even bigger idea present in her contemporary society; giving a woman a voice will always be considered feminist ‘ by those who think a woman ought not to have it. Ultimately, Atwood ‘s intentional effect on the reader is expressed through the oppressive roles given to women, influencing the reader to question their roles as individuals in a society.

Accordingly, in the same household as a handmaid has to be a Wife, deemed as the females on top of the overall woman hierarchy and determined by their husbands status. However, the wives observed in the novel are infertile, therefore may even be judged as holding less value than a handmaid. Hence, the wives such as Serena Joy, are also considerably subjugated by the patriarchy as their only designated role in Gilead is to be a traditional stay-at-home mother.

This consideration corresponds to Atwood ‘s contemporary society and later serves as a criticism, considering the 1980s was a time in which women’s rights began to be viewed as a threat to traditional values. Ironically, not only does Serena have to depend on Offred to fulfill her main role of being a mother, the greatest marker of fertility crowds the only thing Serena technically ‘owns’, her garden. Near the end of the novel, Serena finds out about the affair between the Commander and Offred and exclaims, “You could have left me something. (287)

This quote solely holds the idea that the last thing Serena had left to depend on was her husband – the only thing a woman should have in a society of Gilead ‘s standards – and even that was stripped away from her. Atwood insinuates that the Republic of Gilead has little to no space for women unless they are of a high class or fertile, all alluded to communicate to the reader what a woman ‘s role truly meant at the time of which the novel was written and what Atwood believed society would come to be.

Another high-ranking group of women in Gilead includes the Aunts, true believers of traditional values and whose jobs are to indoctrinate the Handmaids into their new roles. We were a society dying, said Aunt Lydia, of too much choice. (25) This line explicitly pertains to the conservative opinions on abortion held by evangelical Christian political action groups in the 1970s.

These groups succeeded in defining opposition to abortion as a key part of Republican identity and patriarchy, emphasizing the rights of the fetus rather than the rights of women or the right to choose. Along with the preaching of pro-life came the disapproving of feminist values: like Aunt Lydia once said, Modesty is invisibility.

Never forget it. To be seen  to be seen  is to be  her voice trembled  penetrated. What you must be, girls, is impenetrable. (28). At this moment, Atwood uses the aunts as a source to impose fear on the Handmaids or even just on the idea of being a noticeable strong woman. She is suggesting it would put them in a dangerous or vulnerable situation since, in Gilead, the role of a woman is not to stand out as that would imply a kind of power only a feminist holds. Atwood then imposes an effect on the reader to reflect upon the traits that make up a modest woman and if they should be heavily regarded by women as individuals in a society to fill their roles. 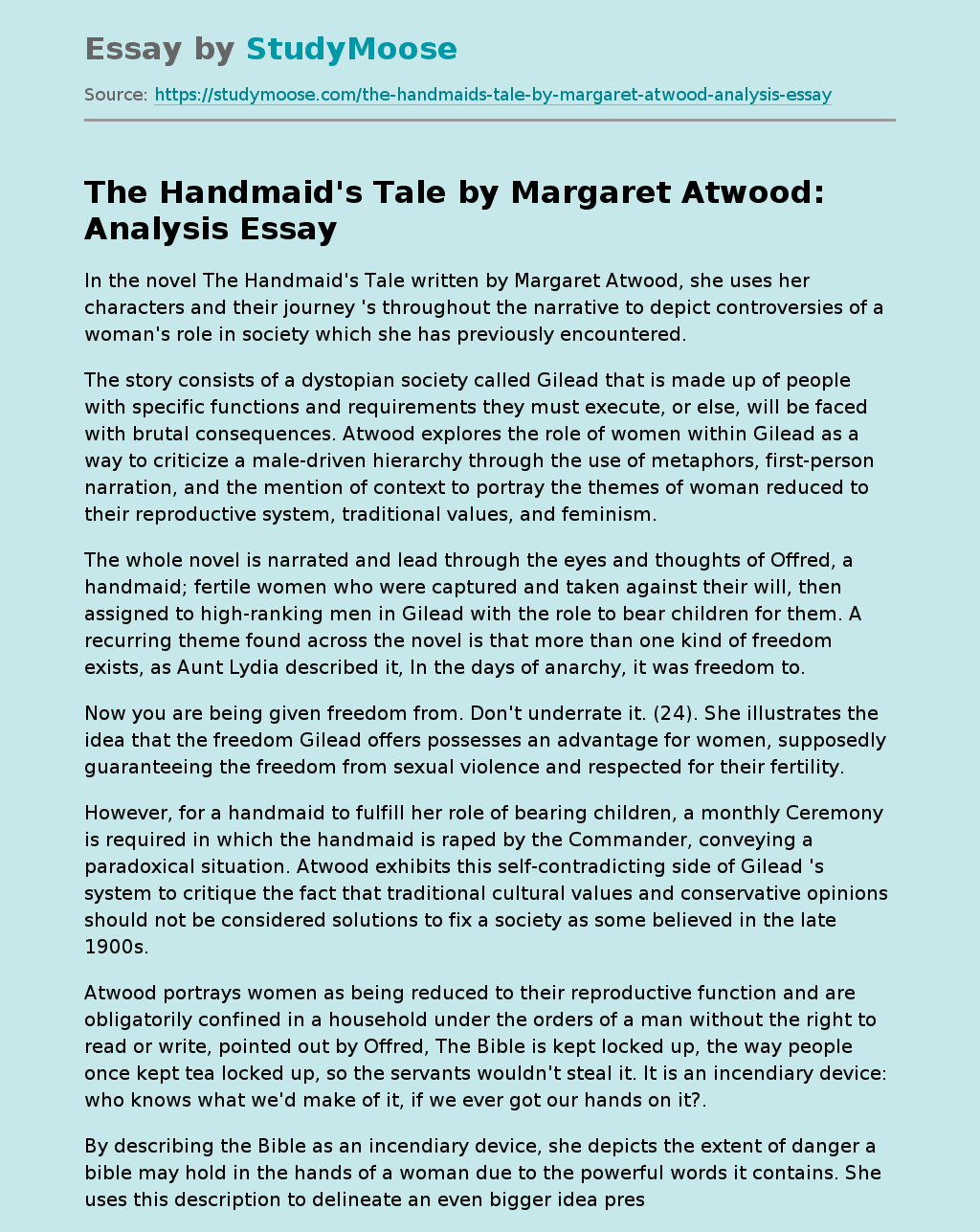