A Poem The Siren Song by Margaret Atwood

The poem ‘Siren Song’ may be believed to indicate an alluring woman who has no morals. This could be alluded to, as the term ‘siren’ might be highlighting a feigning and insincere female trying to manipulate a man. On one hand, the poem could be interpreted as one, which subtly complains about women in general, as Atwood claims that the song ‘forces men to leap’.

Through generalizing ‘men’, the poet naturally separates the two genders in order to convey that no one man is individual, similarly to women.

Turn in your highest-quality paper
Get a qualified writer to help you with
“ A Poem The Siren Song by Margaret Atwood ”
Get high-quality paper
NEW! AI matching with writer

In contrast to this idea, the likelihood of Margaret Atwood writing so negatively about her own gender is slim. Additionally, another perspective of the poem could be taken where Atwood hints at her need for revenge on men and how they are shallow and unchangeable.

The undistinguishable characters within the poem insinuates that there is more than one time in which the ‘siren song’ could be sung and how monotonous it can be.

‘It works every time’ could convey the idea that many women experience the monotony of men. Also, due to it being the last sentence, it seems that the song regularly ends negatively, much like her possible view of relationships as they work for a while and then they end suddenly.

A technique, which alludes to the idea of men being the negative influence on the poem, is rhetorical questions. ‘Will you get me out of this bird suit?’ could emphasize Atwood’s belief that men are superficial and care only about the looks of a woman.

The ‘bird suit’ may symbolize the outside beauty of a woman and the inside of the suit could represent the personality, which she may see as equally or more beautiful.

The use of a rhetorical question displays the hidden secrets and many unanswered questions within a relationship. The personal pronoun ‘you’ may make the persona feel unique and the most important power in a relationship, which would definitely communicate how alluring the ‘bird suit’ is.

The poet uses irregular structure and rhyme to portray the ‘siren’s’ boredom with the dreariness of the song. Enjambment such as ‘I don’t enjoy singing//this trio’ communicates the lack of importance and individuality between every man that they sing it to because no sentence has a separate line.

This could symbolize every man metaphorically molding into one because Atwood may see them as having the same bad habits, which always have a destructive stimulus. ‘Fatal and valuable’ are two adjectives utilized after the line change. This may display the song’s regrettable but necessary revenge on men because they have two juxtaposing tones.

Atwood, though debatably trying to present men as the undesirable beings in the poem, uses imperatives, which could be construed in more than one way. ‘Come closer’ exemplifies a ‘siren’ trying to seduce a man. The application of seductive imperatives contradicts the blame being placed only on men. Perhaps the repetition of both words having harsh sounding ‘Cs’ creates the possibility that Atwood wishes to create emphasis on the short sentence. She might do this to accentuate the theory that women feel resent and bitterness about having to be seductive to get a man’s attention.

A Poem The Siren Song by Margaret Atwood. (2016, Apr 28). Retrieved from https://studymoose.com/a-poem-the-siren-song-by-margaret-atwood-essay 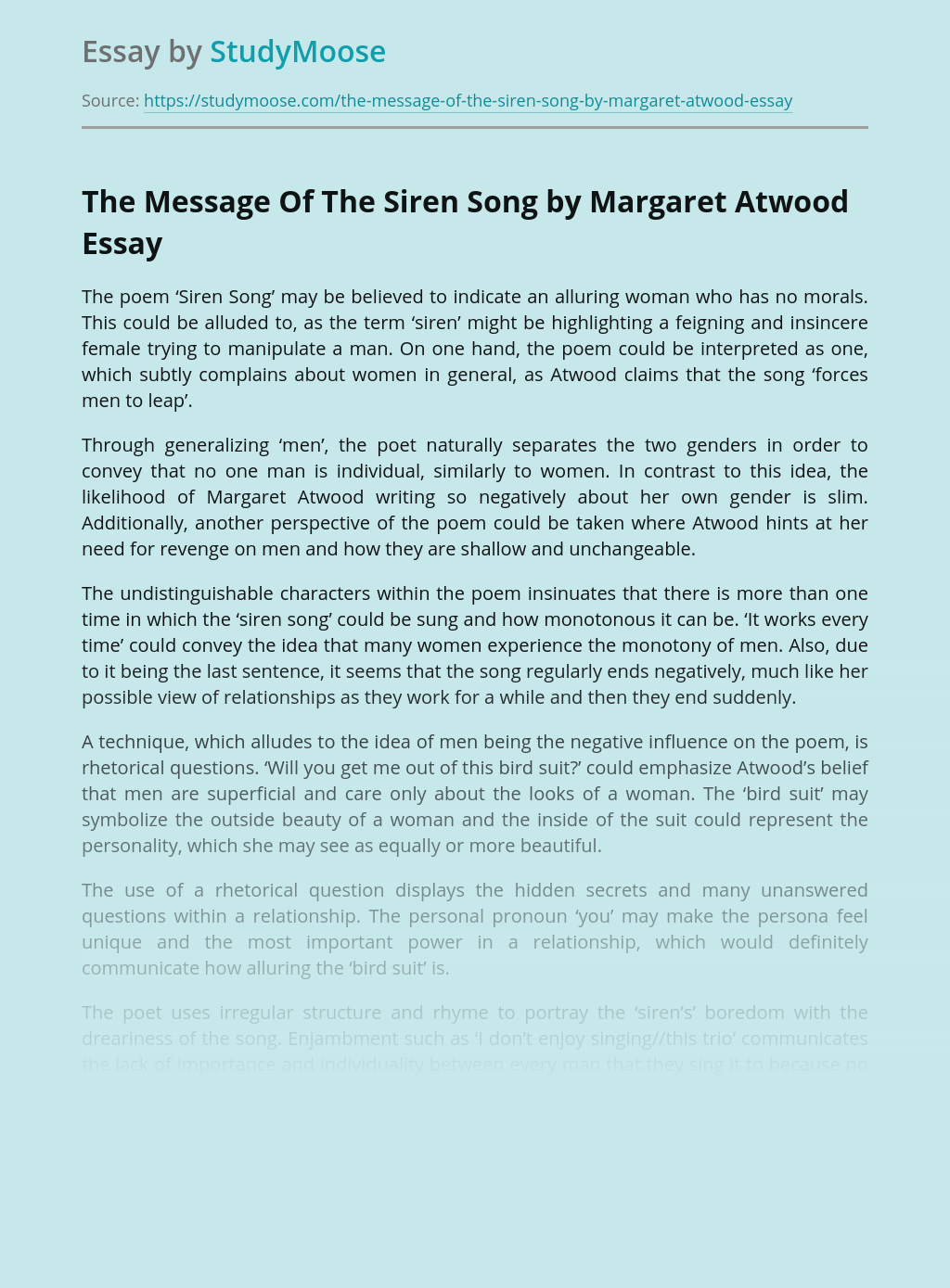 Turn in your highest-quality paper
Get a qualified writer to help you with
“ A Poem The Siren Song by Margaret Atwood ”
Get high-quality paper
Helping students since 2015
Stay Safe, Stay Original