The Opening of The Handmaids Tale by Margaret Atwood

The first four chapters act as an effective and appropriate introduction to the Handmaid’s Tale. Throughout the first four chapters, Atwood uses several techniques, and also the creative anti-chronological feature of the novel to the engage the interest of the reader. Chapter 1 immediately sets up the time scale of the novel, within the first sense Atwood cleverly employs the past tense, ‘We slept in what had once been the gymnasium’, the interesting combination of the past tense and a contemporary feature of life, suggests to the reader that the novel is set in a future.

Don't use plagiarized sources. Get your custom essay on
“ The Opening of The Handmaids Tale by Margaret Atwood ”
Get custom paper
NEW! smart matching with writer

Atwood then appeals to the reader, through Offred’s description of the former gymnasium. Atwood also takes the first chapter as an opportunity to introduce the reader to the ironic parallels of the hierarchical society of Gilead, Atwood intrigues the reader by contrasting the pleasant connotations of the words ‘Angels’ and ‘Aunts’ against the vengeful, militaristic feel of words like ‘guns’ and ‘cattle prods’.

Offred’s descriptions of her surroundings are vivid, her description contains use of each of the senses, and she smells ‘the pungent scent of sweat, shot through with the sweet taint of chewing gum and perfume’, this invites the reader to empathise with Offred, and renews the idea that although Gilead as a society may be far from what we live in, we do have our links to it.

Atwood creates a sense of the void within Offred’s room. Offred’s description of the room is comprehensive and she takes in all the small details in the room.

This shows how much time Offred has, and how unpalatable her existence is. Offred’s desperation preoccupation with escape, even through the most desperate methods is also used throughout the chapter, ‘They’ve removed anything you could tie a rope to’. Atwood maintains the interest of the reader but developing their curiosity for Gilead. Offred does not fully explain her situation or circumstances, but the reader is forced to make conclusions from the clues, the Aunts that patrol with ‘electric cattle prods’, and the Handmaid’s with ‘flannelette sheets like children’s’.

However Atwood does not reveal too much, and still highlights differences between the society of Gilead, and our own society, ‘The cigarettes must have come from the black market’, Offred observes, showing the difference between Gilead and our society. The themes Atwood uses throughout the novel are also present in the first few chapters, Atwood cleverly uses the description of Serena Joy’s garden as a metaphor for the theme of fertility.

Atwood extends this beyond obvious connections between the flowers and fertility, but is also able to demonstrate Serena Joy’s impersonal and rigid opinions of relationships and reproduction through the artificial and empty feel of the garden, an example of this is Offred describing the Commander’s wife ‘tying the flowers into place’, this is a link to the theme of human beings gaining an artificial control over nature.

Atwood also makes use of the theme of ‘Freedom to’ contrasted with ‘Freedom from’, and examines the relationship between both. Offred describes her room as ‘Not a prison, but a privilege, as Aunt Lydia said’, this shows that although Offred may be being protected from a malevolent force outside, there is irony in this freedom as she is clearly restricted and does not feel she possesses any freedom at all.

This theme is again used, when Offred overhears the conversation between Cora and Rita, ‘Go to the colonies, Rita said, they have the choice’, Atwood carefully uses this quote to emphasise another irony within the Gilead system, Atwood could be encouraging the reader to employ the argument posed by twentieth-century Liberal philosophers, who rejected the competitive, and brutal free market society saying that individuals did not gain employment through their own choice, as the only alternatives were starvation and death. Again Atwood is inviting the reader to question the notion of ‘freedom’ in the novel.

Atwood’s use of fairytales within the second chapter is interesting. Offred describes herself in her red Handmaid’s attire as ‘a parody of a fairytale figure’ and ‘a sister dipped in blood’. This incorporates two different images into the novel, and contrasts with Offred’s role as a handmaid. ‘A parody of a fairytale figure’, may have been used to contrast the uniform of the Handmaid’s with Little Red Riding Hood, who throughout the fairytale is presented as a vulnerable, passive female who needed a more masculine protection from the wolf.

This links to the idea of ‘Freedom from’, with Offred’s role giving her protection from something, but also shows Offred’s bitterness towards being a submissive female figure. Offred now seems a strong political role model to the reader. ‘A sister dipped in blood’ however may suggest that the uniform is supposed to promote the same female bonding and unity that you may encounter in a convent, but the fact that this is ‘dipped in blood’ suggests that this bonding is achieved through the force and brutality of the institution around her.

The first chapters also provide an accurate and appropriate introduction to the narrator, Offred. We are introduced to Offred’s wit and intellectual capacity, she plays on phrases such as ‘Waste not want not. I am not being wasted. Why do I want? ‘ but this also demonstrates Offred’s subversive nature, and her almost unconscious sense of questioning everything around her. Atwood uses an almost self conscious narrator throughout the first few chapters, Offred is presented as a passive part of the society of Gilead, and at times she appears as in doubt and confused as the reader, when Offred meets Nick she says ‘Maybe he is an eye? , Offred’s uncertainty makes her seem more human, and also a more honest narrator, and helps the reader to empathise with her. Offred also possess very human and ‘normal’ qualities throughout the chapters, at the end of chapter four, she teases the young guardians, showing Offred as having a flirtatious sexual side to her, but also a sympathetic and almost motherly side when she worries that ‘they have no outlets now except themselves, and that’s a sacrilege’.

The Opening of The Handmaids Tale by Margaret Atwood. (2020, Jun 02). Retrieved from http://studymoose.com/the-opening-of-the-handmaids-tale-by-margaret-atwood-essay 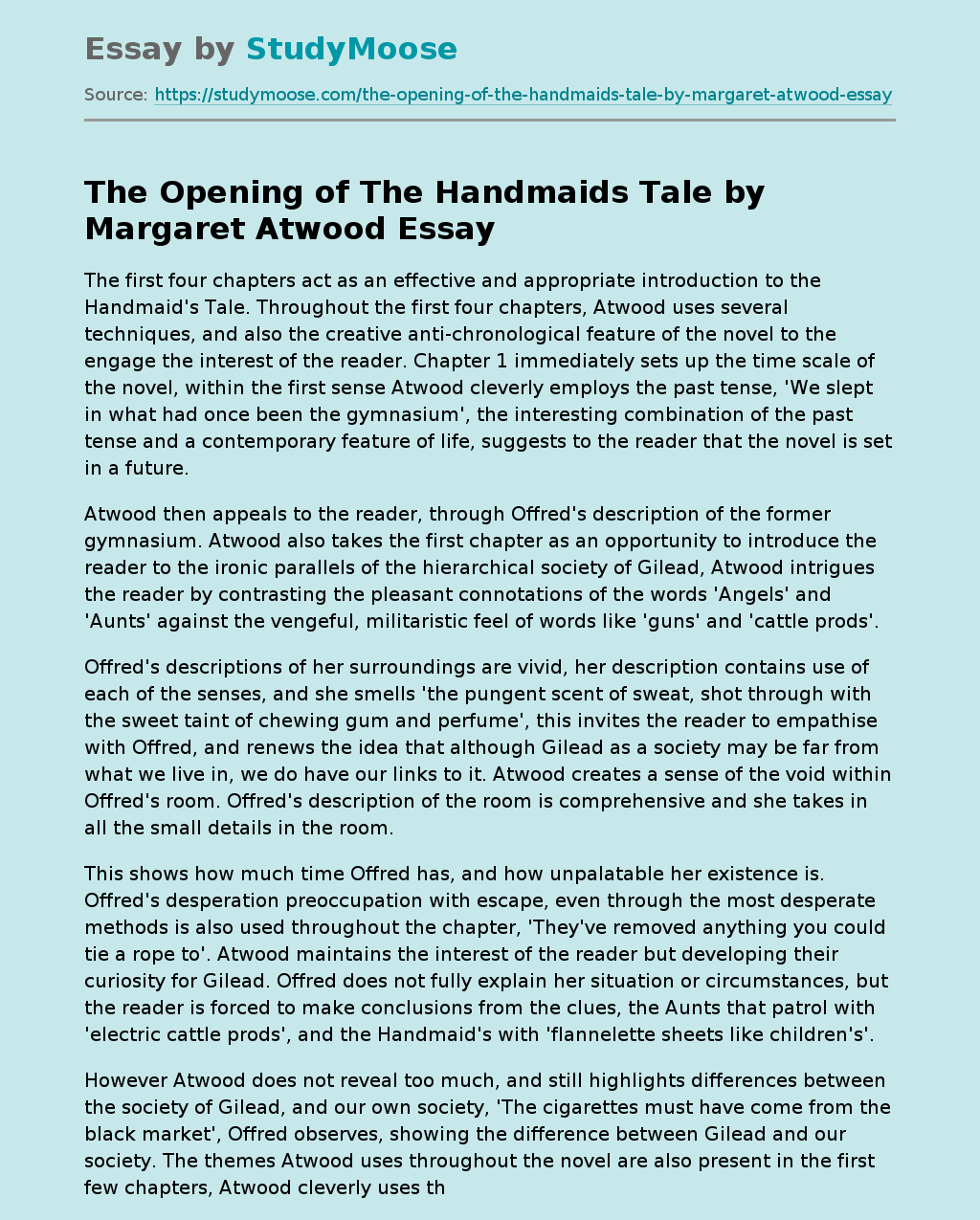