The Growing Pandemic of Type 2 Diabetes

Type 2 diabetes has achieved pandemic proportions, affects some 300 million people worldwide. Type 2 diabetes results because insulin production is deficient compared to the demands of the body, which can be increased due to obesity or other factors. Its remarkable increase and earlier onset for the previous 100 hundred years show increased calorie intake, less physical work, and other lifestyle factors. Type 2 diabetes is heterogeneous and shows the interference of numerous disease processes. It is best considered as a syndrome rather than a disease.

Don't use plagiarized sources. Get your custom essay on
“ The Growing Pandemic of Type 2 Diabetes ”
Get custom paper
NEW! smart matching with writer

Certain Measures used to overcome metabolic anomaly are diet and weight loss. , but malfunctioning of beta-cell is characteristically progressive, with a decline in insulin production and dependence.

A therapy used the gut hormone glucagon-like peptide-1 (GLP-1 for the treatment of type 2 diabetes mellitus. L –cells of the gut wall secrete this hormone. This hormone is rapidly inactivated by the enzyme dipeptidyl peptidase (DDP) 4. This enzyme is inhibited by GLP-1 based therapies to make GLP-1 available to the body. [1]

The current occurrence of type 2 diabetes mellitus in Pakistan is 11.

The basic function of this gene is to encode a 7-transmembrane protein that acts as a receptor for glucagon-like peptide 1 (GLP-1) hormone, glucose-induced insulin secretion is stimulated by GLP-1 hormone.

The function of this receptor is at the cell surface, becomes internalized in response to GLP-1 and GLP-1 analogs, and it is very important in signaling cascades which cause insulin secretion. Polymorphisms in this gene are related to diabetes. Multiple transcript variants of this gene are due to alternative splicing.

Gastrointestinal peptide hormone is Glucagon-like peptide (GLP)-1 which is secreted from three major tissues in humans, endocrine L cells in the distal intestine, α cells in the pancreas, and the central nervous system. This hormone plays a vital role in the management of type 2 diabetes mellitus (T2DM). The therapeutic effects of GLP-1 include most prominently a glucose-dependent insulinotropic function and other actions on glucose homeostasis. GLP-1 is also beneficial in gastric emptying and appetite regulation valuable in reducing food intake and body weight. This hormone binds with class B G protein-coupled receptor (GPCR), namely, GLP-1 receptor (GLP-1R), and activates it.[4]

A significant negative impact on GLP-1–binding affinity and potency due to point substitution of Phe28, Ile29, and Leu32 residues into Ala is observed. The effect of substitution on the binding affinity (GLP-1 radioligand competition IC50) and potency (cAMP activity EC50) was much affected due to substitution of, Phe28 (1300/1000-fold decrease in affinity/potency) and Ile29 (93/27-fold reduction) compared with Leu32 (17/twofold decrease), thus indicating that interactions of Phe28 and Ile29 with the conserved hydrophobic core of the ECD of GLP-1R are predominantly important. The substitution of Ala24 by Arg is missense (the corresponding residue in glucagon) as it does not affect GLP-1 affinity, whereas Val33Ala (glucagon mimicking) and Ala30Gln mutations only had a minor effect on GLP-1 affinity. So it is observed that the polar interactions of Ala24 and Val33 with the ECD of GLP-1R are not necessary for GLP-1R binding and suggest that GLP-1 residues at positions 24 (Ala/Arg) and 30 (Ala/Gln) are not key determinants of GLP-1R/GCGR selectivity. [3]

The Growing Pandemic of Type 2 Diabetes. (2020, Oct 18). Retrieved from http://studymoose.com/the-growing-pandemic-of-type-2-diabetes-essay 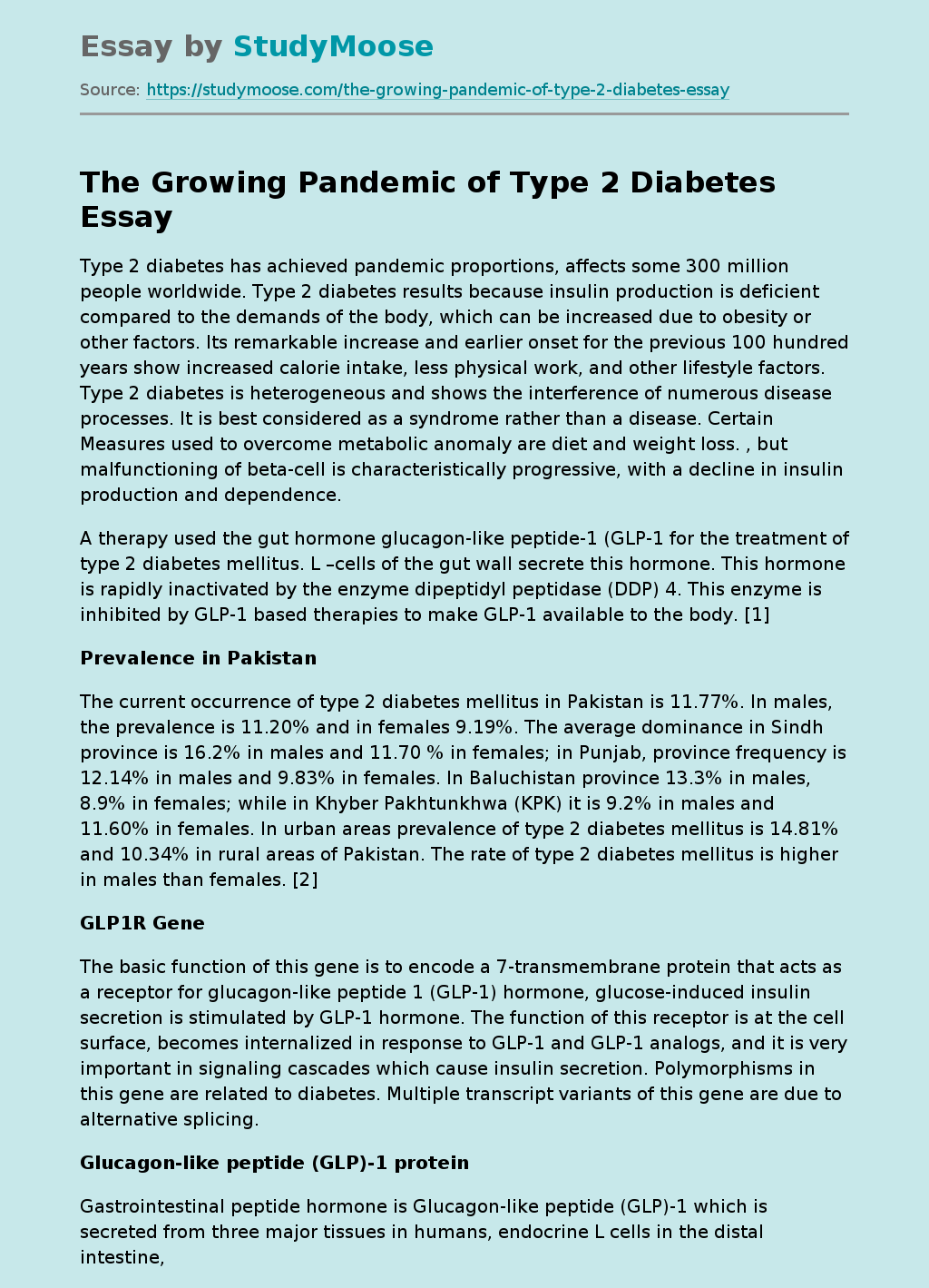