Throughout history every generation has been different from the next, and every child is raised knowing the media and social acceptances of their own generation. Two generations that are very close to each other but are very different are the 1990s and the 2010s. The 1990s was revolutionary for its rise in multiculturalism, and also started to introduce technology in the forms of cable TV, internet, and videogames. The 2010s continues this rise in technology and multiculturalism, and has also become a decade of reality TV, online shopping, cell phones, tablets, and more inappropriate movies and music.

Some comparable aspects of both generations include technology, TV shows, and music. In my opinion the 90’s comes out on top as a better time to grow up in.

The technology of the 90’s was much more simpler and not as relied upon as in the 2010s. Cell phones were introduced in the 90’s and were very big and clunky, only a few percent of people used them so you wouldn’t see people glued to their phones all day.

Proficient in: Growing Up

The World Wide Web had only just been invented and was a huge curiosity to the people discovering it. People of all ages in the 90’s use to walk to stores and by a new CD to play on their walkmans, and digital cameras were just becoming commercially available. As for video games, the Super Nintendo Entertainment system (1990), Gameboy (1990), Nintendo 64 (1996), Playstation (1994), Sega Saturn (1994), and the Sega Dreamcast (1999), all of which had innovative, creative, educational, and fun games to play.

technology was more of a casual fun thing, and not a dominant force, so kids played outside a lot more as well. On the other hand, the 2010s also had a huge leap in technological advances.

In 2012 Google Chrome became the world’s top web browser, the tablet was invented, everyone has a cell phone (and kids are given them at too young an age), YouTube became very popular, and FaceBook and Twitter rule social media. While some of this technology is a huge achievement, it is used in mainly the wrong ways. Parents give their children tablets and cell phones at too young of an age, too substitute a babysitter, and this ends up being the only thing the kid does. Social media sites have led to many suicides because of cyber bullying, and is filled with drama, which is why I believe FaceBook should have an age limit. If it had an age limit then it would only be adults on it, and they would use it to find long lost friends, and cyber bullying would go down a lot. As for video games, 2010s released the Wii, Xbox 360, Ps3, Nintendo Dsi/Dsi xl, Nintendo 3ds/3ds xl/ 2ds, Wii U, Xbox One, Ps4, and also customizable gaming pc’s have become very popular.

Although all of these systems are great and have many fun games, yet the gaming consoles have become filled with too many FPS games (First-person shooters), and I mean way too many to the point that games are focusing more on graphics and less on innovation and fun. M rated games (M for mature) are being bought by children’s parents and given to the child as a gift. Now I never realize any big issues by M rated games, and know that the violence is just in the game and doesn’t need to happen in real life. However when these games are given to young kids, it will affect their minds as they grow and are glued to mature rated videogames all day. The 1990s and 2010s technology have both taken huge leaps, but it appears to me that the 1990s was more casual fun, and there was no cyber bullying.

The 1990s TV shows were more family friendly orientated and did not consist of thousands of reality shows. Sit-coms such as Seinfeld, Friends, Full House, The Fresh Prince of Bel-Air, Everybody Loves Raymond, and Boy Meets World were mainly family friendly although some may have contained some slight sexual innuendo. TV commercials were much better, as there wasn’t as much insulting of your intellect, really bad comedy, and sex in them during the 1990s. Nickelodeon and other such cartoon networks were very popular for kids and they did not act like you were stupid. Some memorable cartoon and kid shows from the 90’s include Rug rats, Double Dare, GUTS, Pokémon, Powerpuff Girls, Dragon Ball Z, Power Rangers, Teenage Mutant Ninja Turtles, Batman the Animated Show, Captain Planet & The Planeteers, Ren and Stimpy, and Sailor Moon. However, 2010s TV shows have been corrupted by fake drama reality TV, sex, over violence, and drugs. Even while watching commercials you come across sexual innuendos, tampon commercials, and condom commercials.

If I was still a little kid and this stuff was appearing on my TV I would be asking my parents some questions, and It would probably feel quite awkward seeing stuff like that on TV at such a young age. Cartoons and kid shows such as Pokémon, Hannah Montana, Phineas and Ferb, Teen Titans Go, can still be entertaining, but they have truly toned down the vocabulary, life lessons, and humour which makes for an experience that feels like your being treated as if you were an infant. Anime has become extremely popular in the 2010s, and for good reason. Anime holds on to things from old cartoons such as good vocabulary, humour, life lessons, emotional experiences, intense battles, and good voice acting. Sadly most anime has been taken off TV around America and Canada and the only way to watch it is to find it online or buy them at stores.

Music in the 1990s consisted of a large variety, the most popular being Grunge, teen-pop, Hip-Hop, Rap (nothing like today’s rap), alternative rock, punk rock, Rock and Roll, trance, and techno. People had they’re on musical taste and did not just try and fit in with the media’s favorites. Conversely, if you look at the music of the 2010’s, they still have a big variety but there are some obvious leaders of the pack. Rap, Pop, Electronic music, and Hip-Hop lead the top most popular genres of music of the 2010’s. The rap, hip-hop, and pop music is nothing like it use to be, it now is mainly focused on sex, money, gangsters, drugs, getting drunk, and pleasure in any form. Me, as a seventeen year old boy, is still surprised on how fast the acceptance of music like this has reached the media, and I feel that it truly is not good for the minds of the youth growing up in this age, while the 1990’s still did have some of these flaws, but it was much less.

Through discussing technology, TV shows, and music of the 1990’s and 2010’s, I can safely say that even though I was only born in 1996, the 90’s had less bullies, was more family friendly, and was generally more fun than it would be, being born in the 2010s. However each generation has their own positives and negatives, and not one could ever be perfect. The important thing is to make the best of it, and to not be afraid of being yourself. 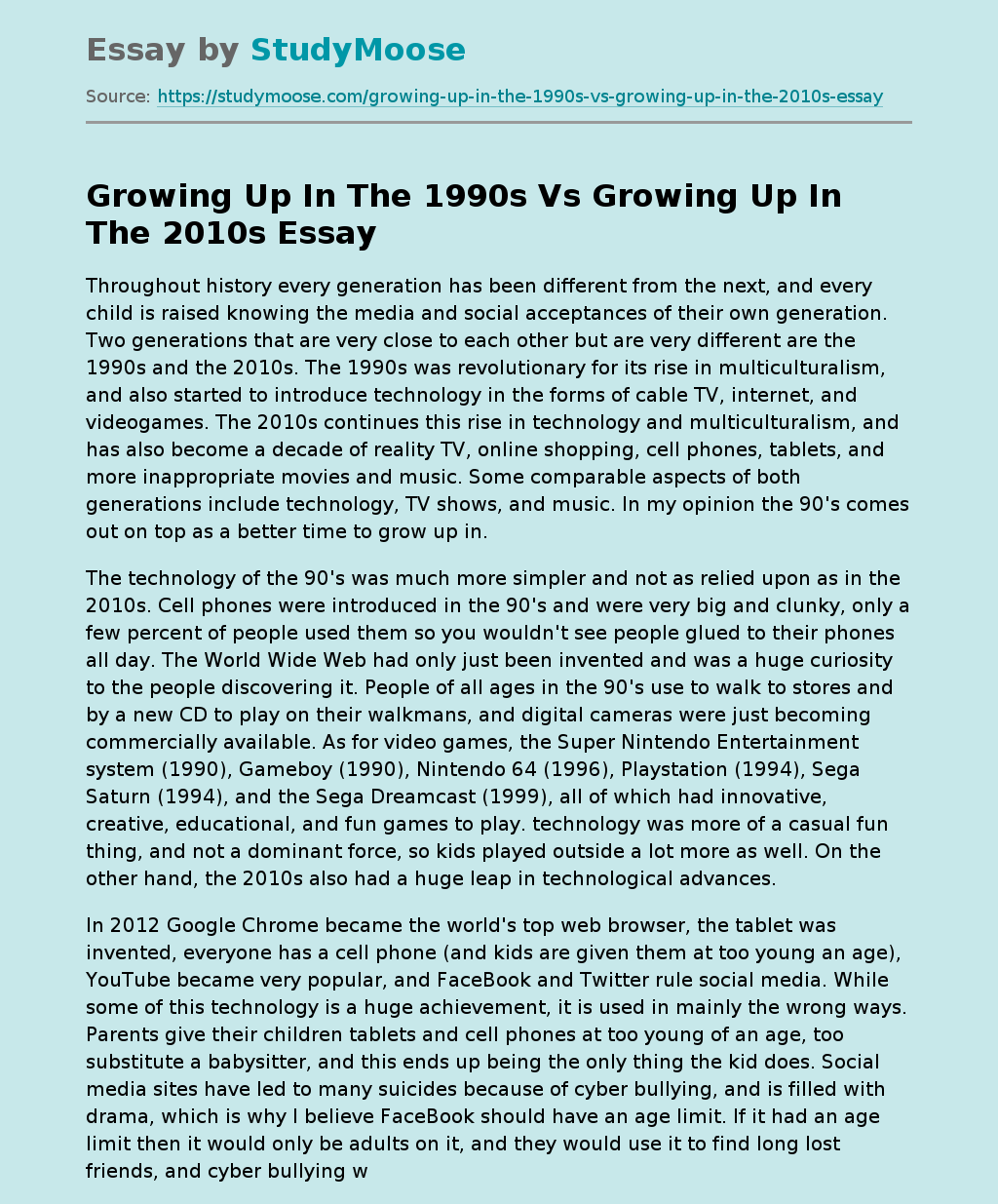