The Greek and Roman Influence over Modern America

The Greeks and the Romans were among the most influential societies in the history of the world. Evidence of Greek or Roman influence can be found in almost every culture or country that has ever existed. Though both cultures were different in practice and incredibly competitive with one another, their politics and their beliefs set the stage for future civilizations, including those of the modern world. In particular, the values and practices of Greek and Roman citizenship and politics, more than any other cultures, influences American policies today in terms of values, government, and self-image.

Don't use plagiarized sources. Get your custom essay on
“ The Greek and Roman Influence over Modern America ”
Get custom paper
NEW! smart matching with writer

The Greek civilization was one of the first organized and well-structured societies in history. The Greeks viewed themselves as great and superior to all those that were not of their culture. They thought that most of the outside world consisted of barbarians and, although under the law of Xenia, they were kind and generous to outsiders, they thought of themselves as the more intelligent individuals. Thus, the title and status of being Greek was exceedingly important and those who defied the ways of the Greeks were not considered to be loyal and were often rejected in society.

The Athenians, especially, encouraged the involvement of their citizens in political life.

In fact, those who refused to participate in political life were labeled as Idiotes, which simply means someone who only pursues one’s own interest and does not contribute to society. These Idiotes were ostracized for their unpatriotic practices, because Greeks wanted their citizens to display a love to their country above all others.

Greeks also valued reason and rationality and enjoyed philosophical views, they sought after a definition of everything and believed in the apollonian concept based upon reason, brightness, and intelligence. They even held large assemblies where they held discussions which led to decision making and the passage of laws. The Greeks gained respect and remembrance through these traditions.

Any individual who studies Greek culture can see a clear similarity between the ways the Greeks ran their civilization and the way Americans run their country today. Greeks, as mentioned before, thought they were far superior and intelligent than other cultures. In Pericles’ Funeral Oration, Thucydides states: “In short, I say that as a city we are the school of Hellas, while I doubt if the world can produce a man who, where he has only himself to depend upon, is equal to so many emergencies, and graced by so happy a versatility, as the Athenian.”(Pericles’ Funeral Oration) This quote displays their superior view and also reminds the reader of the American mentality as well: Americans, unconsciously, see themselves as smarter and far more superior than the rest of the world, especially to countries who are not as advanced as America.

Though, like the Greeks, Americans are accepting and generous to outsiders, they are still looked down upon. Another concept that is both American and Greek is the idea of Patriotism and loving ones country. Since September 11th Americans have had an immense burst of love for their country and often display flags and memorials to show their loyalty. Those who reject this patriotism are essentially rejected from normal society and often do not receive the same respect as loyal citizens. One can see this reflected in Greek practices as well as in almost an identical degree. In the Greek play, Antigone, the central conflict deals with the leader, Creon, who decides not to recognize a citizen who has failed to hold loyalties to his country. This causes controversy with the character Antigone and the whole story deals with conflicts of loyalty to one’s country versus doing what one feels is right. This theme of loving ones country is not only important in present day America but is also a key element in the Greek way of life.

Another common theme of Americans and Greeks is the idea of enlightenment. Americans place a great deal of importance upon education and citizens are at a fight against illiteracy and ignorance. In Greece we see a similar emphasis in moving away from the human rejection of intelligence. In Plato’s The Allegory of the Cave, he tells a story focused around the view that most people live in a world of ignorance and need to go against the norm and to seek intelligence. This Greek philosopher dictated these ideas that are still used in theory in modern America. Although Americans and Greeks are not exactly alike, they share many similar traits, reflecting the Greek influence on America.

Romans were a civilization that originated after the Greek culture. They, like Greeks, saw an extreme significance in the idea of a love for one’s country and loyalty. The Romans, however, were more concerned with public affairs such as education, sanitation, and health. They held a strong connection with their ancestors and wished to imitate what the ancient Romans did. Although Romans rejected the idea of a Rex, or king, they favored the common hero. They wanted a leader who a “regular Joe”, someone who was average and could still led an average life after doing extraordinary things. The Romans also had a very defined government that was broken into consuls, senate, and assembly. There were two consuls who served in place of the king as the leaders of the Roman Empire. Next in succession was the senate, comprised only of patricians who debated and passed legislation. Finally, there was the assembly made for the plebeians to approve laws. These characterizations of Rome helped them become one of the most powerful empires and paved the way for future empires.

The Romans, like the Greeks, appear to have strong ties in American policies. Today, Americans have many laws and practices concerning public affairs, which are highly important in this society. In The Rape of Lucretia by Livy, Lucretia is raped and her husband and father avenge her rapist and then ban kings in Rome. This story displays the importance of public affairs such as family to the Romans, Although Antigone is a Greek play, it contains the same Roman ideas of the importance of family: the main idea of the play deals with Antigone seeking to do what she feels right, and that is to honor her brother. Both stories deal with the idea of honor and virtue in citizenship. These values hold true in America today with the idea that public affairs are important. Americans also support a common hero much like the Romans did. In the Roman Story The Story of Cincinnatus by Livy, Cincinnatus is called upon by the Romans to defend them in their time of need.

Cincinnatus is a common man who does extraordinary things in battle and then is able to give up his title and return to an ordinary life. Just like Cinncinatus, the character Antigone in the Greek play Antigone, is an uncommon hero; she is brave and follows her own beliefs, but she has hardship in her life just like that of everyone else such as death and scandal in her family. These stories are much like American stories, especially that of George Washington, who at the time of the American Revolution served as America’s common hero. Perhaps the biggest similarity seen in American and Roman culture is that of government. America has a clear distinction of checks and balances, a practice that gives different power to three different government groups in order to keep one person or group from becoming too powerful.

Whether one looks back to the developing ancient times of Greece and Rome, or to modern day society, the citizenship and political practices are extremely similar. Though America has been compared to many different nationalities, they have the strongest ties with Greece and Rome in terms of government, self-image, and values. This proves that looking to the past can help one look toward the future as well.

The Greek and Roman Influence over Modern America. (2016, Dec 18). Retrieved from https://studymoose.com/the-greek-and-roman-influence-over-modern-america-essay 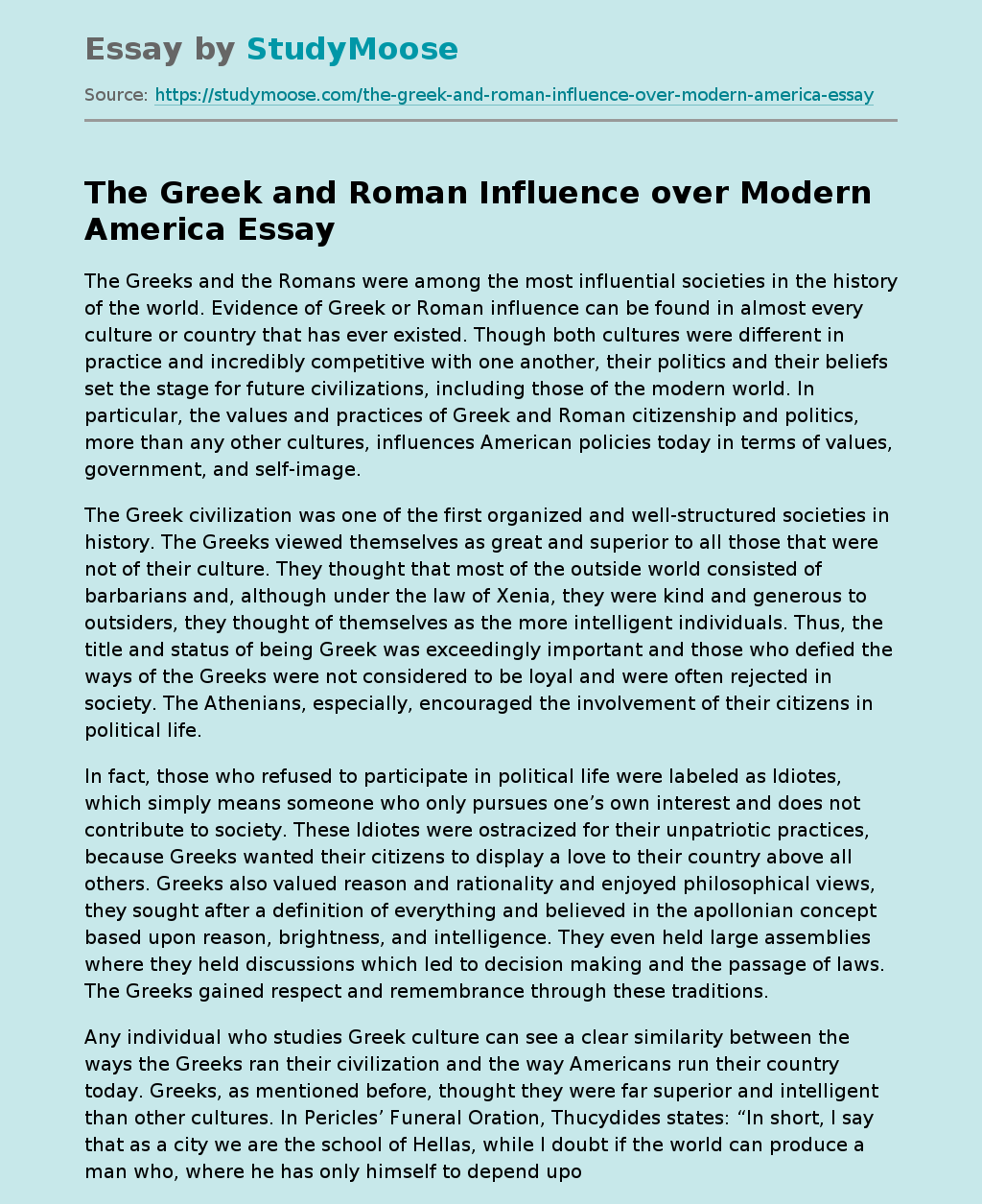