The Great Gatsby a book about the upper class during the 1920s. The economy was booming and poor people became rich quicker than ever before. When reading The Great Gatsby the reader immediately thinks about the money, parties, alcohol and the social life of the higher class. Love is actually an important theme throughout the book when you think about it and every character in the book has some kind of connection to love. Personally, I think the main relationship in the book is Gatsby’s and Daisy’s because a big part of the plot is about Gatsby and the things he does for her.

Don't use plagiarized sources. Get your custom essay on
“ The Great Gatsby a book about the upper class during the 1920s ”
Get custom paper
NEW! smart matching with writer

I am also going to discuss the marriage between Tom and Daisy and the other one between Myrtle and George. The book is told from Nick’s perspective so I am also going to analyze their feelings for each other.Tom and Daisy Buchanan have been married for three years and even if their relationship isn’t the most loving one, but they still had some kind of weird connection that kept them together during the whole book.

Tom is a very materialistic person who cares a lot about his social status and Daisy seems to be more of a status symbol than a wife to him. Tom isn’t a very loving person and he has a bitter personality. I think Tom is bitter because after his career as a polo player he hasn’t found anything interesting in life. I loved the fact that during a dinner Gatsby introduces Tom as the polo player to all the guests and drives Tom crazy.

I think he did this just to clarify to everyone that he was one of the rich polo playing kids that inherited a lot of money. Tom’s personality makes Daisy’s and his relationship very shallow and official. Tom loves Daisy but she doesn’t seem to love him back.At the Plaza Hotel at the end of the book, Daisy revealed her feelings. First, she says that she has never loved Tom. But when Gatsby asks if it’s true she answers, I did love him once ” but I loved you too. I think Daisy has a hard time deciding who she loves because she wants to keep both Tom and Gatsby. I believe the biggest reason Daisy hasn’t left Tom yet is that they have a daughter.On the other hand, just by the way Tom acts you can see that he doesn’t love Daisy even though he says so. I think Tom’s affair with Myrtle proves how little Daisy means to him. He knows that Myrtle is married but doesn’t care because he has enough money and power to get anyone he wants. After reading the book it seems to me that Tom is a person who constantly wants more and can’t be satisfied. That’s also probably one of the reasons he sees Myrtle. Myrtle doesn’t seem happy about her and her husband’s financial situation. Their marriage does not seem to go very well either and George is the opposite to the cheerful and talkative Myrtle. The fact that Nick knows about Myrtle and Tom but hasn’t told Daisy irritates me a lot. Nick probably just feels that it isn’t his duty to tell Daisy about Myrtle. The connection between Gatsby and Daisy isn’t even comparable to the marriage between Tom and Daisy. They have a history that goes back before Tom and Daisy were married. When they first met in Louisville they both quickly noticed some kind of connection between them but shortly after that Gatsby had to leave to fight in the war. Everything that Gatsby did to be close to Daisy shows his love for her, from the house he bought to the parties that he arranged. Before he had the chance to meet her through Nick, the green light on Tom’s dock symbolized Daisy in his mind. I think Gatsby was addicted to her without really realizing it. And when Daisy said that she had loved Tom too he understood that he did not mean as much to her as she meant to him. But him taking the blame for killing Myrtle shows that he had a hard time understanding that Daisy maybe didn’t love him anymore. Maybe he thought that if he would take the blame Daisy would stay with him. The last relationship in the book is between Nick and Jordan. Nick met Jordan for the first time when he came over to Tom and Daisy to have dinner. Later in the book, Nick develops a real interest in her. I personally think that Nick likes Jordan because she is different and modern. Jordan is very independent and a very successful golfer. She was a good example of a flapper. During the 1920s the term Flappers became more popular. Flapper girls were independent, wore short skirts, drank alcohol openly and drove cars. Sadly their relationship ended when Nick saw how callous Jordan was when Myrtle died. My opinion is that Nicks partly used that as an excuse to try to leave the big mess and drama caused by Gatsby, Tom, and Daisy. In conclusion, this was a book full of love and drama. Love wasn’t a theme that I would normally bring up but I’m glad I did. Now I see the book and the characters from a whole new perspective. As I see it, not a single relationship in the book ended well. Not even Tom’s and Daisy’s. After Gatsby’s death they just left East Egg without as much as a note. I think the way Nick described them was genius so I am going to end with the quote, They were careless people, Tom and Daisy. They smashed up things and people, and then returned back into their money and their vast carelessness.

The Great Gatsby a book about the upper class during the 1920s. (2019, Aug 20). Retrieved from https://studymoose.com/the-great-gatsby-a-book-about-the-upper-class-during-the-1920s-essay 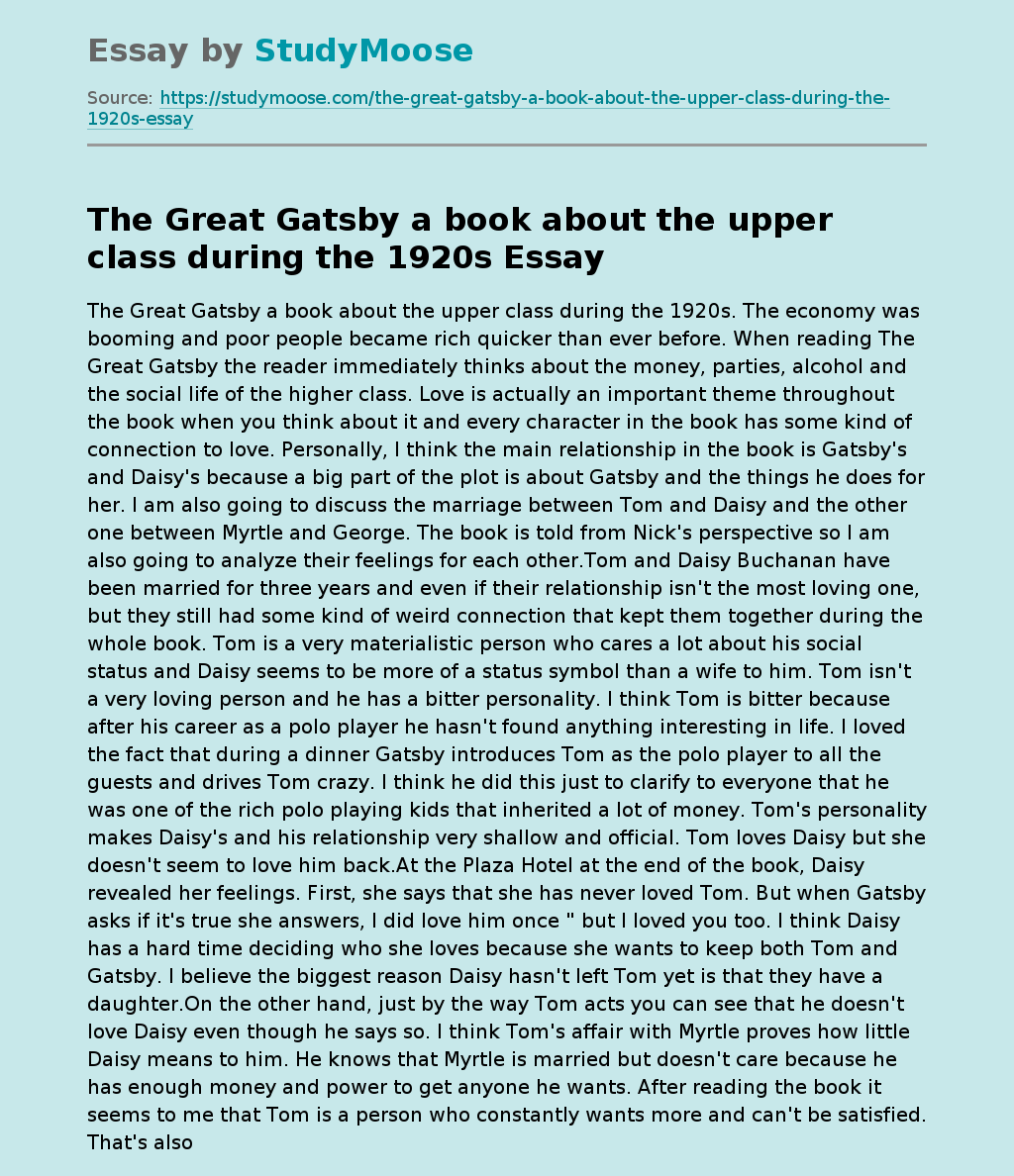