The Great Depression And The New Deal History

Thousands and thousands of men were lined up waiting for work so they could make money for their families. Others were begging for food to eat in order to survive the harsh time. This is what you saw all over the United States of America during this time of struggle. Getting jobs was easy when the country wasn’t in such difficulty, but now the country was going through an economic nightmare also known as the Great Depression.

“The Great Depression was a period during the 1930s when there was a worldwide economic depression and mass unemployment.

Don't use plagiarized sources. Get your custom essay on
“ The Great Depression And The New Deal History ”
Get custom paper
NEW! smart matching with writer

” (www.thefreedictionary.com) The timing of the Great Depression varied across nations, but in most countries it started in 1930 and lasted until the late 1930s or middle 1940s. It was the longest and hardest depression of the 20th century. Our country had recently gone through its most memorable moments known as the roaring twenties and now it’s in its most memorable moments known as the Great Depression. President Hoover and President Roosevelt did their best to try to turn the nation’s future around and make it better. Throughout their efforts to help, President Hoover failed with his plan and President Roosevelt developed many New Deal Programs that had somewhat of a good effect for the nation. These New Deal Programs were formed to help aid the nation and its citizens economically and mentally. Although the New Deal succeeded in its goal to prevent a future widespread economic collapse, it ultimately failed to achieve its greatest goal of successfully ending the Great Depression.

Prior to the Great Depression, our country had what some considered the “golden age”. In the 1920s, also known as the roaring twenties, our country’s economy and our stock market were at its highest ever. The Roaring Twenties was a period of peace and prosperity in America and the United States was also wealthier than it had ever been before. “In this decade, America became the richest nation on Earth and a culture of consumerism was born.” (www.u-s-history.com) For the first time in history, more people were living in urban areas rather than rural areas and there were more factory jobs than farming jobs. The 1920’s and 1930’s became known as the “Jazz Age” when musicians like Louis Armstrong and Joseph “King Oliver” Oliver introduced Jazz music to the world. People often spent their free time singing and dancing to jazz music. As you can imagine, this is a time that all of the citizens of America loved and never wanted to let go of. During this time period many new inventions were made and there were a lot of technological advances. “Electricity brought enormous changes to daily life. “In 1920, about 35% of U.S. homes had electric lights. By 1930, 68% of homes had electricity.” (www.americanhistory.abc) People also had shorter hours and increased wages. “The nation’s total wealth more than doubled between 1920 and 1929, and this economic growth swept many Americans into an affluent but unfamiliar “consumer society”. People from coast to coast bought the same goods, listened to the same music, did the same dances and even used the same slang.” (www.history.com) People spent their money on radios, electricity, theater tickets, and other leisurely items. After all of this good that happened to America it always has to lead to bad because everyone knows nothing good ever lasts. When people were spending all of their money on luxurious and unnecessary things and investing on companies just for the fun of it, the stock market crashed on October 29, 1929.

“The 1929 stock market crash is conventionally said to have occurred on Thursday the 24th and Tuesday the 29th of October. These two dates have been nicknamed and well known by everyone as “Black Thursday” and “Black Tuesday.”(www.eh.net) On Thursday, October 24th, 1929 was the start of the Wall Street crash. Black Thursday was also the first day of the panic when 12,894,650 shares were traded. On Tuesday, October 29th, 1929 the Dow dropped 12% following a previous day’s drop of 13%. This day is now known as Black Tuesday. The crash led us into the Great Depression. Banks, stores, and factories were closed and left millions of Americans with no jobs and no homes. “By 1932 stocks were worth only about 20 percent of their value in the summer of 1929.” (http://www.history.com) Many people depended on the government to provide them with food and jobs. During the Great Depression the unemployment rate increased rapidly, from 1929 to 1933 the unemployment rate increased from three percent to twenty-five percent. This left about thirteen million Americans unemployed with no jobs. Thirteen million people are about a quarter of the nation’s families that did not have a single employed wage earner in their household. “Even those fortunate enough to have jobs suffered drastic pay cuts and reductions in hours. To save money, families neglected medical and dental care.” (www.digitalhistory.uh.edu) The Great depression is one of the hardest and saddest struggles in American history that we will never forget about and never want to go back to. Both President Hoover and President Roosevelt made their best attempts to help the people and the nation as a whole.

During the Great Depression, President Herbert Hoover was in office. The stock market crashed around eight months after Hoover took office. While Hoover was the president, our nation was becoming worse and worse each month. The first thing Hoover did in response to the stock market crash was he called business leaders and tried to convince them into keeping wages high, instead of cutting wages as economic conditions required. “Hoover called on churches, charities, and local governments to help the poor. He insisted that this was not a proper role for the federal government.”(www.americanhistory.abc) Hoover believed that the government shouldn’t get too involved in helping the people bounce back from the depression, and the people did not like it. Hoover also failed to convince consumers to keep purchasing. When the people started to see other workers get laid off they also started to fear for their own future, so they cut back on purchasing things. As the nation continued to spiral downwards, everyone knew Hoover wasn’t doing his job as a good president and change had to be done. During the election of 1932, “Roosevelt promised if elected President he would use the federal government to create jobs and regulate industries in an effort to eliminate high unemployment and to prevent a depression from happening again.” (www.kennesaw.edu) He promised a “new deal” for the Americans. The decision was easy for the voters after seeing what poor job Herbert Hoover did as being President so shortly; Franklin Delano Roosevelt became the president of the United States of America.

When Franklin D. Roosevelt became president he made major changes in the nation. The First One Hundred Days was when Roosevelt passed laws to relieve the depression. Roosevelt also helped America in this time of need by starting the New Deal Programs. “The New Deal was a set of programs and policies designed to promote economic recovery and social reform introduced during the 1930s by President Franklin D. Roosevelt.” (www.thefreedictionary.com) The main purposes why Roosevelt established the New Deal was to provide relief for the needy, aid nationwide recovery by providing jobs and encouraging businesses, and to reform businesses and government so that a depression would never happen again. Basically Roosevelt tried to explain to Americans that the New Deal program would seek to deliver relief, recovery, and reform the so-called “3 Rs.” Government spent a lot of their money on programs for two main reasons. One reason why the government spent money on programs was to help recover all of the lost jobs and another reason why they spent money was to give businesses confidence to spend money as well. Once businesses saw that the government had the courage to spend money in a struggle like this, it gave them the confidence to spend their money. The economy slowly grew because money started to circulate. Some of the programs that the New Deal started were the CCC, CWA, FSA, NRA, PWA and SSA.

The New Deal did not end the Great Depression because it only provided relief and not recovery. The start of the World War II was what really ended the Great Depression. The new deal did bring jobs and help the unemployment rate drop; however it didn’t give enough jobs for the depression to end. Once World War II started the country needed a lot of help making supplies for the war and that created new jobs. One new job to build guns and weapons in factories and other jobs were to actually go fight in the war and also we needed people to build airplanes for the war. That is how the Great Depression ended. From 1933 to 1941 the unemployment rate dropped from twenty five percent to ten percent. That is from thirteen million people to five and a half million people.

Now people tried to move on and forget about the Great Depression. Most people had jobs again and had a good amount of income coming into their households. They didn’t go back to spending their money wastefully for awhile but they became smart and saved. Even though both President Hoover and President Roosevelt did whatever they could to help but in the end, FDR did a better job in helping America recuperate from the mess the Great Depression made with his new deal programs. Although the New Deal succeeded in its goal to prevent a future widespread economic collapse, it ultimately failed to achieve its greatest goal of successfully ending the Great Depression.

The Great Depression And The New Deal History. (2019, Aug 19). Retrieved from http://studymoose.com/the-great-depression-and-the-new-deal-history-essay 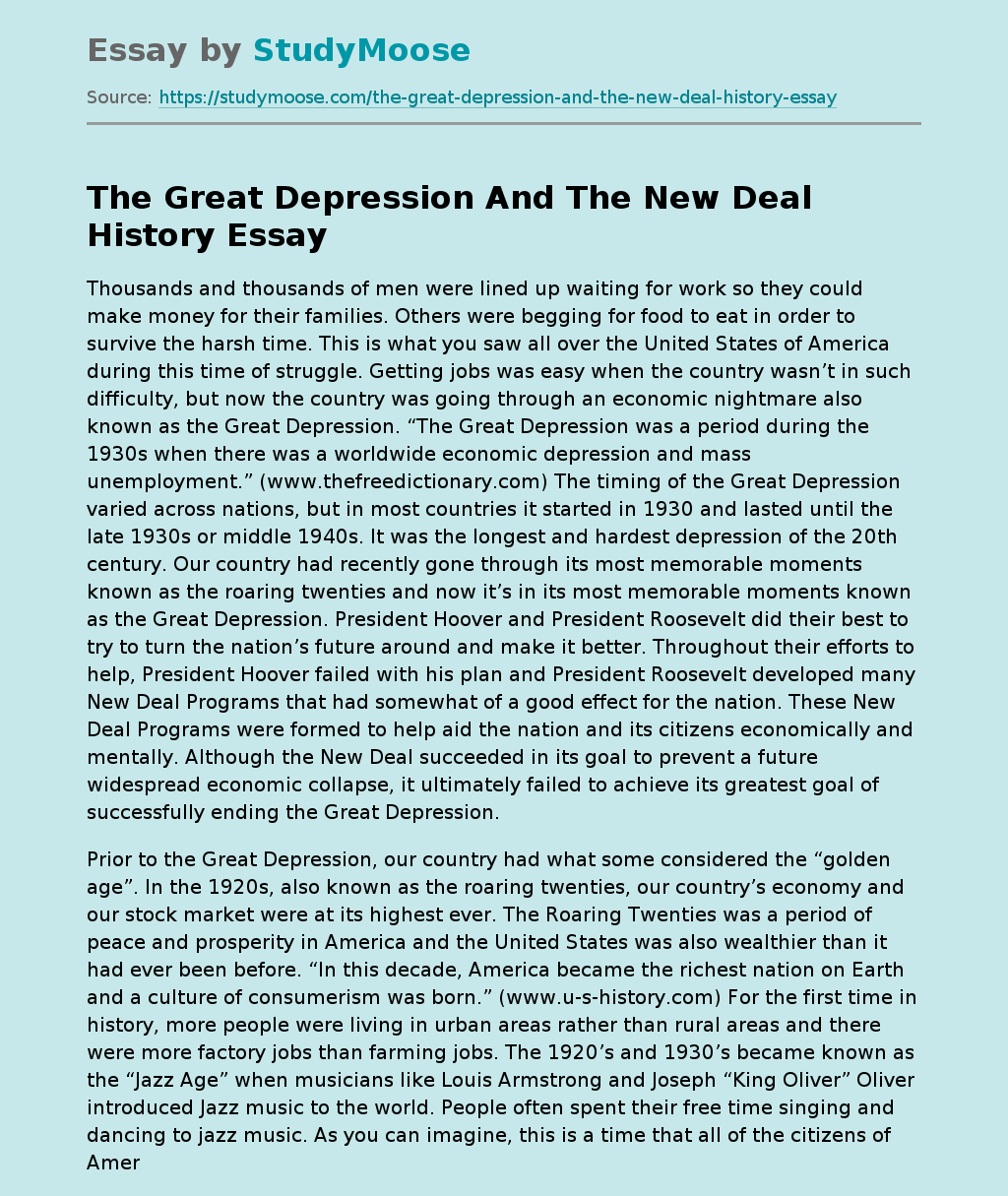