The Golden Age Is Not Behind Us But Before Us

Don't use plagiarized sources. Get your custom essay on
“ The Golden Age Is Not Behind Us But Before Us ”
Get custom paper
NEW! smart matching with writer

The Hindus speak of their Satyuga; the Christians of their Millennium, the followers of the Prophet of Arabia look back to their period of ascendancy, when they had their empires far-flung in the East as well as in the West, in Europe as well as in Asia.

The Golden Age is unanimously conceived to be a period of all-around perfection, of interminable peace and plenty, progress and prosperity.

It is a time of maximum harvest, both intellectual and material. It is an era of great awakening, of glory and sunshine, of immense fertility and originality in all spheres of human activity. It is a spring time, as it were, when the creative activity of the human mind finds its expression in various forms, such as art and literature, science and philosophy, culture and civilization.

As depicted by Thomas More in his “Utopia” the Golden Age is the vision of an ideal State which is founded on perfect equality and liberty, in which there is no religious intolerance, no distinction between the rich and the poor, no racial pride and arrogance, no tyranny, no oppression, no exploitation and no injustice.

Similarly, Shelley in his “Prometheus Unbound” pictures the man of the Golden Ages as “sceptreless, free, uncircumscribed, equal, unclassed, tribless and cosmopolitan”.

Man never is but always to be blest”.

Those who look for the Golden Age in future advocate the ideal of progress. They believe that mankind has been marching on an eternal path of progress, that the past was good, the present is better and the best is yet to be. This principal of progress which includes a conception of the growth of civilization in the past and a similar “upward development in the future” developed in 19th century and was a favourite creed with many a distinguished Victorian thinker, such as Darwin, Hegal, Spencer, Tennyson, Browning and many others. Herbert Spencer declared that “progress is not an accident but a necessity. It is certain that man must become perfect”. Herschel claimed that “Man’s progress towards a higher state need never fear a check, but must continue till the very last existence of history”.

But in the 20th century, we come across many erudites who disapprove the idea of progress. Bertrand Russel, Lious Fischer and many others of equal eminence conclude that neither there has been progress in the past, nor should we hope for progress in the future. Science and morality, art and literature, history and politics all go to show that progress has been an illusory hope that has sustained mankind for generations but which ultimately proves merely a myth, a pure fiction.

The tremendous advancement of applied science, of great modern discoveries and inventions has no doubt, added to the material comforts and amenities of life, but with the advent of technological advancements, they have brought grim complications to the modern man, such as the exploitation of the poor, the conflict of labour and capital, unhealthy sanitation, and so on. In the name of progress we have devastated the peace and loveliness of the world; and have established smoke-ridden cities and dirty hovels, quite away from the safe heaven of God Almighty.

In the field of politics there has been more of decline than progress. Despite, our great boast of having substituted dictatorship with democracy, we have not been able to root out imperialism and colonialism to establish lasting world-peace. We have established the U.N. and for securing universal peace and harmony but the two clashing ideologies of the modern world, the Communist bloc and the Capitalist block are contending desperately for the mastery of the world peace’ is still no better than a fitful gleam. With the clouds of a Third World War gathering thick on our heads, can we say that there is progress, that the present is better than the past and that the best is yet to be?

In the field of literature and fine arts, we admit that great progress was made in ancient times, but let us not forget that the art and literature of old days was more or less a monopoly of upper and ruling classes, the common people remaining not only is ignorant of them but completely illiterate and uneducated. Today, it is very different. Education widespread and thus art and literature have necessarily become broad-based as well as democratic.

One cannot deny that the present has many defects and our civilization suffers from many ills, but we hope that “somehow or other, good will be the final goal of ill”, that with true federation of mankind established in the future and a sufficient measure of justice, social and economic, and equality of opportunity obtained for all, there would be such a release of human energy for constructive purposes that the Golden Age will become a reality in the world.

In the dark clouds enveloping the world we already see a silver lining. Men’s gaze is turned towards the horizon of peace, harmony and brotherhood. Humanity is fed up with wars and conflicts and slowly but steadily marching towards the Golden Age and realizing its dream of perfection. Let us be, therefore, optimistic like Shelley and sing:

The Golden Age Is Not Behind Us But Before Us. (2017, Jan 02). Retrieved from http://studymoose.com/the-golden-age-is-not-behind-us-but-before-us-essay 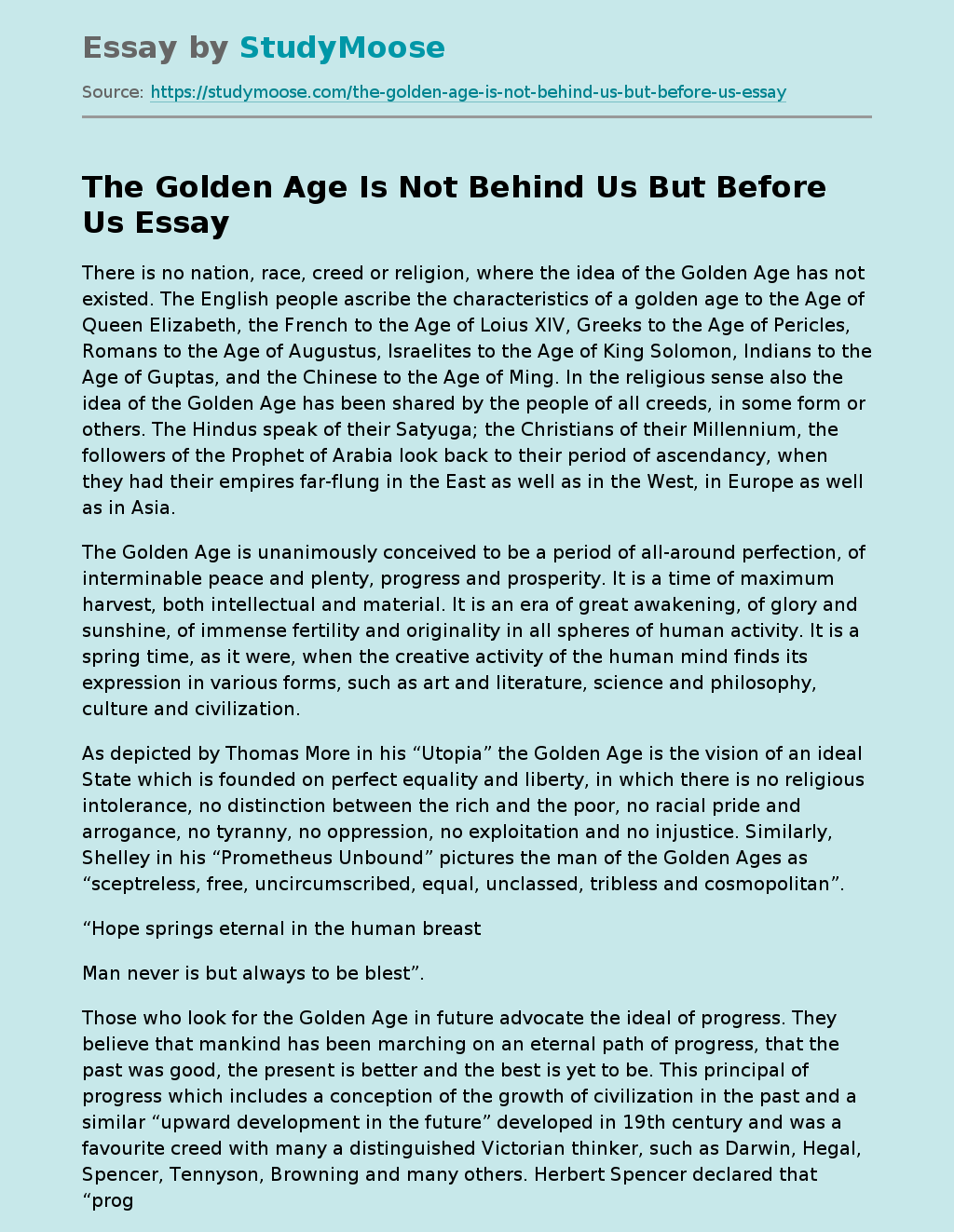