The Global Problem of Gender Equality

We humans of the 21st century live in a universe of diverse types of people, belonging to different backgrounds, races, and gender. Now we often hear the word gender Inequality or Gender Discrimination, but what is it actually? By the book, it means “The unfair rights between male and female based on different gender roles leading to unequal treatment”. Well according to the World Economic Forum (WEF) a report was generated in 2018 as the Global Gender Gap Index Report and it stated Pakistan as the second worst country regarding gender equality in the world giving it a rank of 148 out of 149 countries.

Don't use plagiarized sources. Get your custom essay on
“ The Global Problem of Gender Equality ”
Get custom paper
NEW! smart matching with writer

Believe me you, this is not just Pakistan’s issue but rather a global issue while some countries are trying to dismantle this issue some are disregarding this massive issue.

Men and Women both can be victims of Gender Discrimination but let’s talk about how it is a widespread Human right issue affecting a large chunk of our female population in Pakistan, be it urban or rural areas.

I certainly on a wholesome level do not agree that we have equality between sexes. Women have fewer rights than Men but why? The answer would be that we live in a patriarchal society. Women have not been receiving their due rights since the advent of Islam, they were buried alive, married early, were only allowed to do house chores and were restricted as if in a cage but on the contrary Prophet (P.B.U.H) supported women rights and empowerment enough that he married a successful career orientated women and even helped her with her trading business, the only question that arises now is that why do we as a nation now with such a big example deprive women to work and live freely? The answer remains a mystery among all of us.

Here women encounter all dimensional problems like honor killing, acid attacks, sexual assault and harassment we’ve yet zero clues about how many get justice and even if they raise voices or not. Women witness inequality in education, deprivation of basic essentials of life. Men are mostly regarded as the valuable asset of a family whilst women face domestic violence, taunts for being a girl, they don’t have freedom of speech, right to associate freely and rights accompanying unjustified deprivation of liberty. Parents are seen investing more into their son rather than their daughters are enough to say women are impoverished from their rights not as women but as a human too.

In accordance to all this where we see shallow thinking what should grab our attention is that there are many households with bold thinking who supports women empowerment and are mostly recognized as a feminists, just think what would happen to the world, to the nation if we let the women come into spotlight they’re not just home material but they’re so much more and stands equal chance like men and are equally talented too. To promote feminism and highlighting issues there are many steps taken by the people in our nation like #Metoo Campaign, Aurat March, not only did they led voices for women rights but also promoted respect towards homosexuality which shows all we want is peace.

In conclusion, Women Empowerment is something one should embrace because “Gender Equality is a human fight, not a female fight”. It’s never too late to change our thinking as we are human beings which means were a human in the process. A society cannot fully flourish until women stand hand in hand with men.

The Global Problem of Gender Equality. (2021, Feb 03). Retrieved from https://studymoose.com/the-global-problem-of-gender-equality-essay 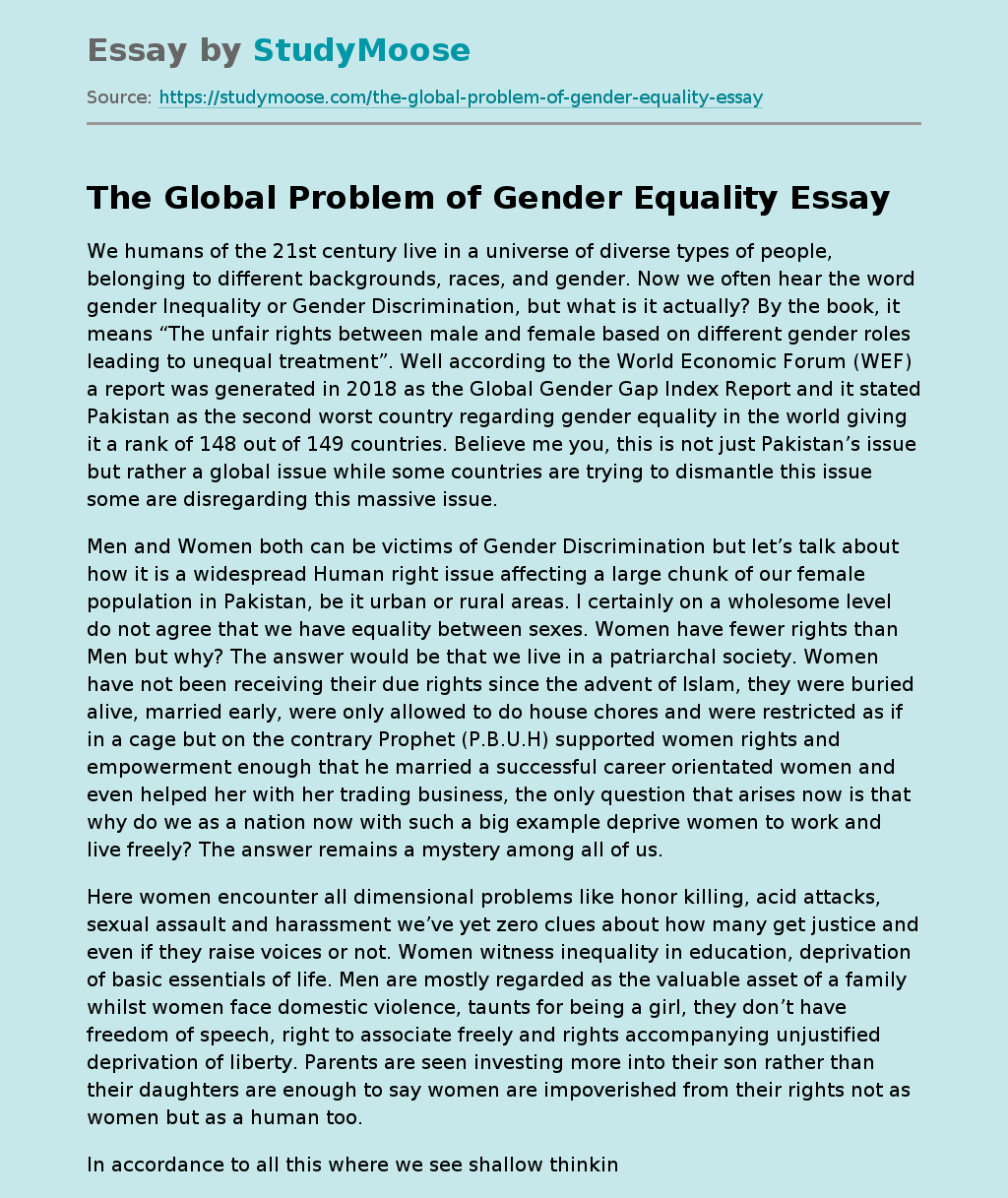