The gap between rich and poor in China

This report is going to talk about China is facing a big challenge to fight the increasing gap between the rich and poor. It caused growing social and economic inequality. The rich get richer and everyone else gets poorer. Firstly, the differently reasons for this problem will be put forward. Then, the report will be explained the influence on the development of economic co-ordination and society evolution because of the rich-poor gap. Meanwhile, the solution of the increasing gap between the rich and poor will be discussed.

Don't use plagiarized sources. Get your custom essay on
“ The gap between rich and poor in China ”
Get custom paper
NEW! smart matching with writer

The gap between the rich and poor indicate the imbalance of personal wealth in the society. The major expression is the gap of income, wealth and standard of living. China is facing the serious gap between rich and poor. “Between 2008 and 2009 the number of Chinese millionaires with assets worth more than 10 million renminbi rose from 825,000 to 875,000, according to rough estimates by the Chinese government. The super rich at the top of the wealth pyramid are rapidly increasing, while the average peasant at the bottom earns less than US,000 per year.

” (Sherry Lee,2010). This problem has caused many influences.

2. Why China is facing the increasing gap between the rich and poor
2.1 The unreasonable economic policy

In the process of social development, our country brought the unreasonable economic policy into effect. The third plenary session of the fourteen encouraged that some areas and some people become rich first. This policy resulted in the increasing of Gini coefficient increasing constantly. “The last time Chinese officials published a Gini coefficient was in 2000, when they announced that China’s 2000 figure was 0.

2.2 The unevenly distributed of natural resources

The other reason of the gap between rich and poor is the unevenly distributed of natural resources. China indeed abounds in natural resources of various kinds. But, the geographical distribution of its natural resources is not even. Take coal for example: of more than 760 billion tons of total coal deposits, more than 70% are concentrated in Shanxi and Inner Mongolia, whereas only 1.4% is found in nine provinces in southern China. Of proven recoverable oil deposits, most are found in northeast China, northwest China and coastal areas of north China. 70% of natural gas deposits is concentrated in Sichuan and Shanxi. The geographical distribution of water is also extremely uneven: in southern China, water resources make up 82.3% of the national total; whereas, in northern China, water resources make up only 17.7% of the national total. (PEOPLE 2007) Besides, the defect of social security system and educational also led to the gap between rich and poor.

3. The influence of the gap between rich and poor in China

3.1Hinder the development of economic co-ordination

The poverty gap is too large to hinder the development of economic co-ordination. It is low overall level income in China and had an impact on domestic demand. The majority of wealth into the pockets of the rich; however, a small number of wealth into the pockets of the poor. The most resident income has increasing slowly. In addition, the standards of consumption with rich are not greatly increase. Because unable to meet the needs of the rich the consumer market in China, they generally choose to consumption go abroad. Besides, the remainder money of their consumption transformed into deposit. Nevertheless, low-income persons did not have money so that they not have purchasing power. The whole society of average consumption is decrease. Economic depression will resulted in the increasing of unemployment rate and aggravated the gap between rich and poor.

Furthermore, the poverty gap will bring the instability of society even lead to the split of the country. (China Academic Journal) The poor often face the threat of hunger, it impact their psychology and urge them make extreme behavior, such as theft, robbery, murder and other criminal acts. Low-income people will have a strong sense of inferiority and loss. Conflict with society make them mentality out of balance. The main representation is enmity and hate of the rich. There will be a large number of criminal acts occurred. The income gap cause people do not trust the government and bring the disadvantageous of management.

4. The solution of the increasing gap between the rich and poor
4.1Developing the education

Good social order and social management are necessary condition for the development and progress of society. To reduce the gap between rich and poor, the key factor is to develop the education and improving the quality of labor. (PEOPLE POLITICS 2012) Countries should improve the treatment of teachers and increase investment in basic education. Protection of all children will be able to finish compulsory education. So long as they accept the systemic knowledge of education, they have competitiveness in market. At the same time, develop the economic and expand the employment. Not only to solve the increase of new labor employment problems, but also can make proper arrangement for re-employment of the unemployed workers.

4.2Reducing the gap between urban and rural

The second solution is improve social security system and reduce the income gap between urban and rural .

In February 2004, the State Council announced a set of policies to improve the living conditions of farmers. Firstly, support the development of agricultural production in grain producing areas to increase incomes of the farmers. This includes providing incentives to farmers, improving method of production as well as the quality of land, and increasing government investment in agriculture. This measure will greatly increase the income of farmers. And change the structure of agricultural production by improving output mix, management and technology.

Then, assist the farmers in moving to urban areas to find work by reducing various levies collected from them by city governments and by giving responsibility to the latter for the training of the incoming farmers and for the education of their children. Establish market mechanism for the distribution and marketing of grain by allowing more distribution channels including collectives and by the promotion of farm products. Carry out reform in rural areas including the tax system. ( Gregory C Chow 8/9/06)

5. Conclusion
The gap between rich and poor is increasingly serious in China. Government needs to solve this problem urgently. The main way is improve the education level of national and develop the economic. The second way is improve social security system and reduce the income gap between urban and rural.

The gap between rich and poor in China. (2016, Aug 24). Retrieved from https://studymoose.com/the-gap-between-rich-and-poor-in-china-essay 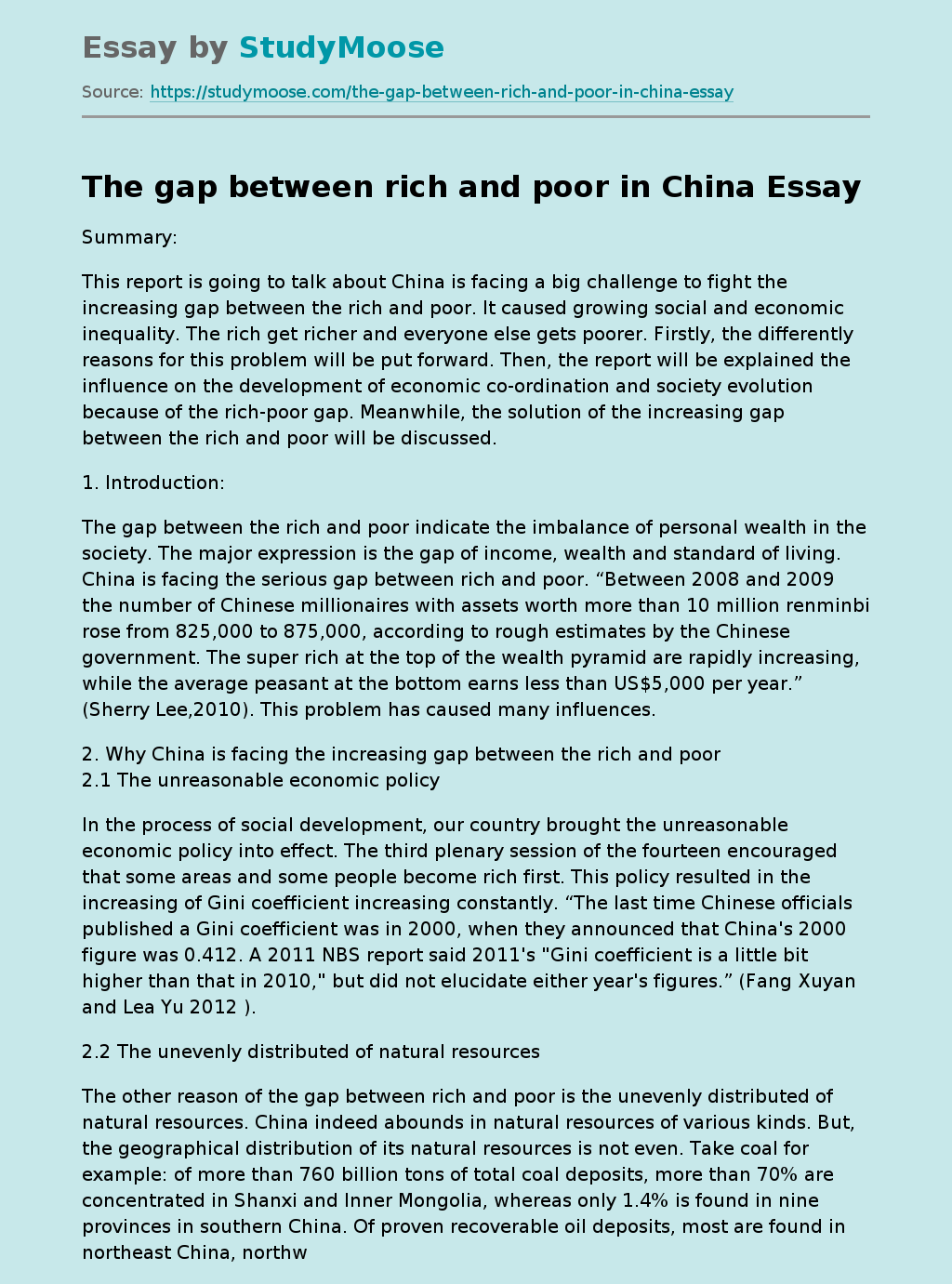