Classification is the method used by scientists to order living organisms. All species have a unique classification that results in a binomial name. classification is used to make it easier for different species to be identified by scientists. The current system, the Three Domain System , groups organisms primarily based on differences in ribosomal RNA structure. Ribosomal RNA is a molecular building block for ribosomes . Under this system, organisms are classified into three domains and six kingdoms . The domains are Archaea, Bacteria, and Eukarya.

Turn in your highest-quality paper
Get a qualified writer to help you with
“ The Five Kingdom and Three Domain Classification System ”
Get high-quality paper
NEW! AI matching with writer

The kingdoms are Archaebacteria (ancient bacteria), Eubacteria (true bacteria), Protista, Fungi, Plantae, and Animalia. The system used for classifying organisms change due to new discoveries being constantly made making some organisms harder to classify into a specific kingdom or domain. This is why different criteria is being added so that newly discovered organisms can be classified.

The original five kingdom system, called the binomial nomenclature, is no longer in use, it is now a six kingdom system. The modern classification uses the following six Kingdoms: Plantae Archaebacteria Eubacteria Protista Animalia Fungi The modern system has also expanded to three domains instead of the original two: Archaea Prokarya Eukarya.

Organisms that were in the kingdom prokaryotae, which contain unicellular organisms that don’t have a nucleus, are separated into two domains. These are called Archaea and Bacteria. The lower hierarchy stays the same – kingdom, phylum, class, order, family, genus and species.

The three domain system was proposed mainly due to new molecular evidence. Starting in the early 1970s, Dr. Carl Woese, a professor in the Department of Microbiology, University of Illinois, Urbana-Champaign, and other scientists began to find evidence for a previously unknown group of prokaryotic organisms. These organisms lived in extreme environments – deep sea hydrothermal vents, “smokers”, hot springs, the Dead Sea, acid lakes, salt evaporation ponds – environments that scientists had never suspected would contain a profusion of life! Because they appeared prokaryotic, they were considered bacteria and named “archaebacteria” (‘ancient’ bacteria).

However, became obvious from biochemical characteristics and DNA sequence analysis that there were numerous differences between these archaebacteria and other bacteria. Before long, it was realized that these archaebacteria were more closely related to the eukaryotes (including ourselves!) than to bacteria. Today, these bacteria have been renamed Archaea. Biologist today have classified and divided all living things into five groups they call Kingdoms. These kingdoms are based on how living things are the same and how they are different. It is important that you understand that biologists are still learning about our world, and are making new discoveries every single day. As our knowledge about the world around us improves, scientists might find a better way to organize and classify life. As a result, these five kingdoms may someday change.

Animalia-Cells do not have a cell wall. Multicellular and feed on other organisms. Plantae- Cells have a cellulose cell wall. They use light energy to produce food by photosynthesis. Fungi- Cells have chitin cell walls. Reproduce using spores rather than seeds. Prokaryote- Have a cell wall but not made from cellulose. Cells have no nucleus. Protocista- Exist as single cells or colonies of single cells. This classification system model was based on principles developed by Swedish scientist Carolus Linnaeus, whose hierarchical system groups organisms based on common physical characteristics. Taxonomy is a hierarchical system for classifying and identifying organisms.

Carolus Linnaeus developed those principles in the 18th century. In 1990, Three-domain system was developed by Carl Woese, an American microbiologist and physicist. The three-domain system divides cellular life forms into archaea, bacteria, and eukaryote domains and each domain can be further divided into kingdoms, phyla, classes, and so forth. While the three-domain system met with some initial opposition, it has since become widely accepted, because of the scientific discoveries which have supported Woese’s proposal. 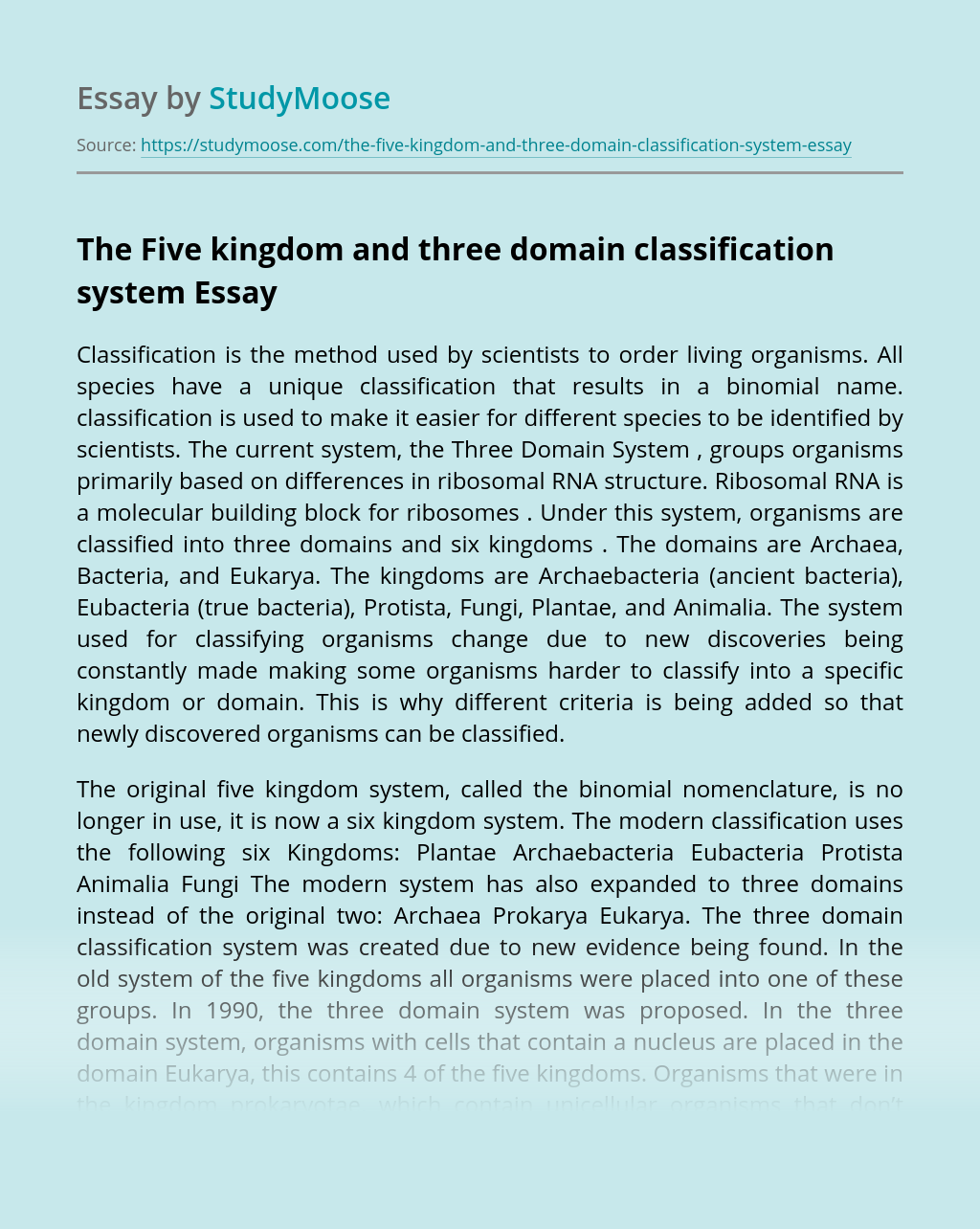 Turn in your highest-quality paper
Get a qualified writer to help you with
“ The Five Kingdom and Three Domain Classification System ”
Get high-quality paper
Helping students since 2015
Stay Safe, Stay Original