The Fires of Jubilee: Nat Turner’s Fierce Rebellion, a book written by Stephen Oates is about a slave insurrection led by Nat Turner in 1831. The United States was still a very young and vulnerable country in the early 19th century. Slavery was seen as an essential part of the economy and the American experience. Stephen Oates compares the differences between Southern and Northern slaves.

In the Deep South blacks where assaulted, publicly humiliated, murdered and lynching’s were all part of daily life.

Don't use plagiarized sources. Get your custom essay on
“ The Fires of Jubilee: Nat Turner’s Fierce Rebellion ”
Get custom paper
NEW! smart matching with writer

In comparison to Southampton, Virginia the slaves here enjoyed additional independence and privileges. Oates describes a setting in Antebellum Southampton County where whites took pride in how “well” they treated blacks. Here a slave, Nat Turner would be born on October 17, 1800 who would be forced to stand up and fight for justice. Nat Turner would lead a bloody revolt and become a hero changing the lives of blacks and whites forever. He was hero in the eyes of some and a murderer in view of others, but what is a hero?

A Hero is “a man of distinguished courage or ability, admired for his brave deeds and noble qualities” (Dictionary.

com) Oates explains how a boy slave who was treated “well”, and was educated, would ultimately rebel for freedom of himself and his people, but in the process would cause the lives of many. According to Oates, Virginians in Old Dominion took special pride in how “well” they treated their black slaves. Virginians often were kind enough to bring slaves to their churches with them on Sunday.

Here the slaves were privileged enough to preacher’s sermon. However, this benefit and freedom was allowed under certain terms. Blacks would sit (if there were no whites standing) in the back pews or in the balcony. Blacks would never sit in the front or center with their white masters.

The gracious efforts of Southampton’s whites were continued on display Sunday afternoon. It was common for masters to allow blacks to visit family and friends after Sunday services. Once gathered together blacks would release built up frustrations from the work week and often sing, dance and carry about as one could imagine. This was tolerated but not particularly appreciated by whites while they enjoyed their Sunday’s. The black “disturbance” would not require the law to get involved however; it was seen as simple “nigger gabble” (20 Oates). A minor annoyance to whites as long as it didn’t get out of hand. Amongst the black slave and their white masters milling about the town square were an unusual amount of black “freemen” walking the streets. This was nearly impossible in states like Alabama, Mississippi and Georgia.

These “free” blacks were able to own property, businesses and even slaves. Oates produces and image of free blacks that must have been most compelling to slaves. In particular, to younger slaves, filling them with hope and wonder for a different tomorrow. The privileges, freedoms and rights that white so proudly awarded their blacks would soon bear a high price. Impressionable blacks were able to acquire the knowledge of possession, loss, and hypocrisy.

This would move towards combat and change. From a very early age a young slave boy Nat Turner, was seen as nothing shy of special. Immediately it was discovered the young Turner was intelligent, bright and had most of all charisma. Nat had a great awakening within himself when he turned 12 years old. Because now he came to the realization that he would work as a slave for the rest of his life (24 Oates). Prior to this he would play with the masters kids, but this would continue no more.

Nat felt hurt and could not comprehend why he has to live this slave life; he could not accept this. He was well liked, deeply religious and an avid reader, Turner’s discontent grew stronger and stronger. He was not pleased with the “well” treatment by whites on his black community. It was his ability to read that made Nat unique amongst blacks in Southampton. This would prove to be the single most important factor in his growth and development. Christian doctrine was everywhere around Nat. It was in fact one of the key pillars that whites used as leverage almost as a weapon to keep blacks in line. Whites would interpret scripture and passages directly from the Bible which implicated non-conformant blacks as evil. To question the white readers and their biblical messages was blasphemy.

Blacks were told to gladly accept their “liberties” allowed them and be grateful to God and whites alike. For here in Southampton they were under the protection and guidance of a benevolent God and his white “messengers”. For Turner this mantra would bring about great conflict and internal struggle. Being both educated and religious were the ultimate components of a now fully developed man named Nat Turner. No longer was he the compliant humble boy who would sneak off into the woods to read and pray. This man was now sure of himself and the rampant hypocrisy of his world. While whites enjoyed true freedom they merely doled out small portions of freedom when and if it pleased them.

These allowances served only to reduce the guilt they must have felt for living a lie. A lie that was based upon their interpretation of scripture saying they were in fact superior to blacks. And the greatest lie of all that slavery was acceptable, good and right. For once Nat Turner read from The Bible possibly the Book of Exodus, he immediately felt a connection with Moses. A messiah sent to free his people from bondage. Nat began to feel rage within him. He felt that “thou shalt give life for life, eye for eye, tooth for tooth, hand for hand, foot for foot, burning for burning”, (ix Oates).

With his comprehension of The Bible coupled with years of growing discontent for the white population of Southampton the transformation was now complete for a hero to emerge. On August 1831 Nat Turner led the bloodiest slave revolt in American history. Fifty-five whites and over one hundred blacks lost their lives. In an excellent manner Oates, details the change from the innocent child to the charismatic freedom fighter. Who eventually becomes the orchestrator for murder, destruction and riots. The repercussions for Turner’s revolt are vast and numerous. The shockwaves were felt in far off counties as well as throughout the country.

So called privileges were revoked in Southampton. They were seen as the reason for the violence and upheaval. After the revolt many whites felt if only blacks were kept in their place the riots could have been prevented. Could the weakness of their society been the reason for the riots and murders? We see Turner and his followers as rebels against an unjust evil system. Ultimately Turner was acting out only as a last result against an oppressive society that should be forced to change. And change was in fact the result. A change that in just 3 decades would cause the largest loss of American lives in its brief history. Stephen B. Oates executed his point well through out the whole book. He clearly shows us that this appalling act was indeed necessary and just. I agree that Turner was a hero, not a murder.

If one see’s Nat as a murder than should we also see a solider on the battlefield as a murder? I would say that is not likely. Even Oates himself says, “On the wall of my study, I keep a likeness of Nat, along with photographs of John Brown, Abraham Lincoln, and Martin Luther King, Jr.—the subjects of three of my other biographies. For me, the four lives are all of a piece: They form a biographical quartet centered around the greater Civil War era and its century-old legacies. All four of my subjects were driven, visionary men, all were absorbed in the issues of slavery and race, and all devised their own solutions to those inflammable problems. And all perished, too, in the conflicts and hostilities that have surrounded the quest for freedom and equality in this country.” (X Oates). Oates did a very good job of putting the reader in the eye of a slave.

Finally Stephen Oates asks the reader to contemplate the benefits and perils of slavery in American society. While it could be argued a necessary evil was needed given the circumstances of a young country, slavery certainly did come with a large price. The cumulative loss of hope, the despair and loss of personal growth could never be quantified. While on the other hand, could America been a viable nation state without the low cost of labor producing its goods for market? This small community acts as a small example for the country as a whole. Oates’ story is finally a description of how a young slave would have to kill in order to make a good positive change for generations to come. 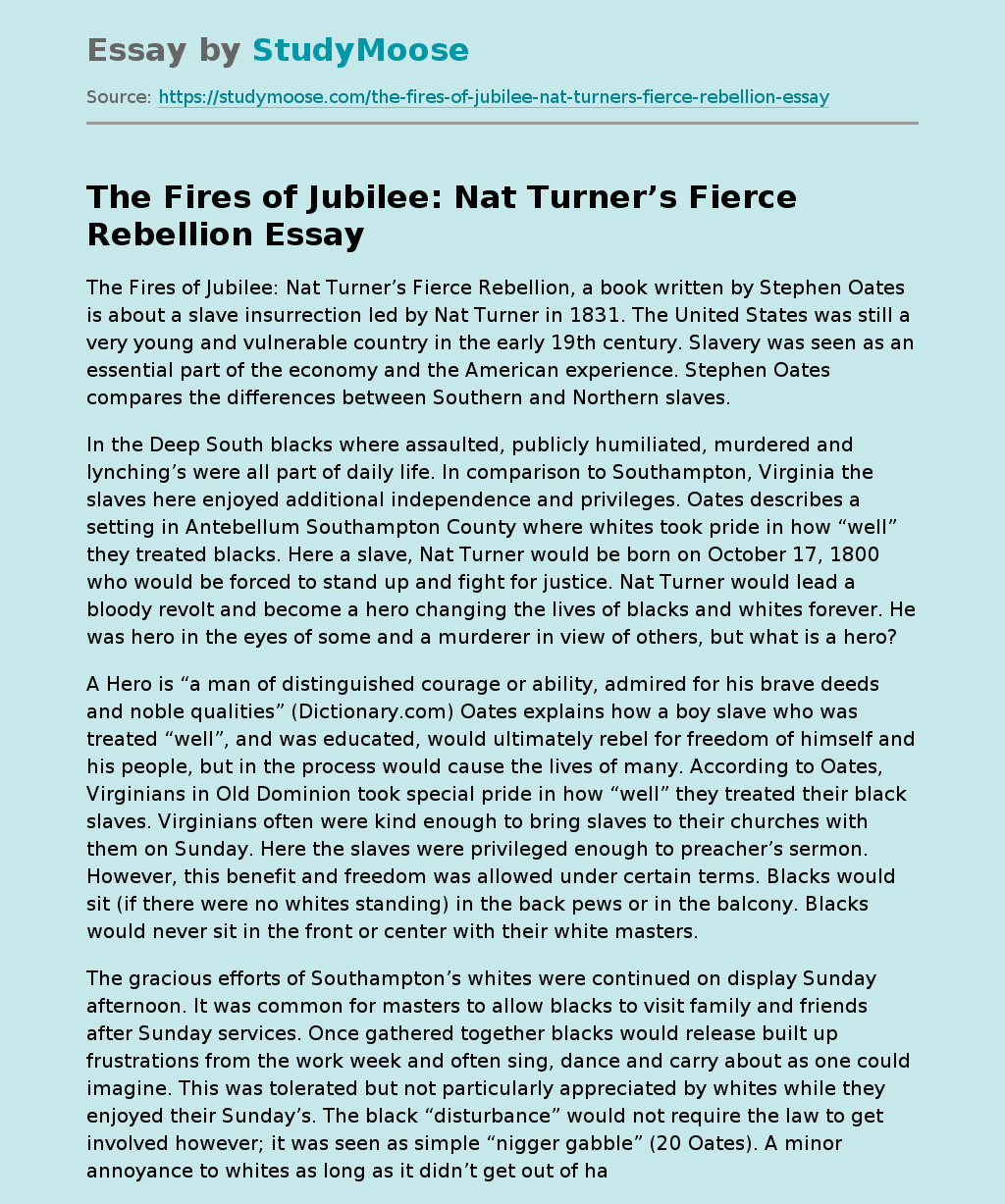