The Fight for American Independence : Battle of Yorktown

Over the course of the fight for American independence, many battles were fought. Of the many battles fought, The Siege of Yorktown was a rather important one. Due to the major participants, applicable strategies used in this battle, the victory served to make a significant difference in the overall outcome of the American Revolution.

There were three major participants at The Battle of Yorktown: Americans, British, and French. The American General was George Washington, the British General was Lord Cornwallis, and the French General was Comte de Rochambeau.

Don't use plagiarized sources. Get your custom essay on
“ The Fight for American Independence : Battle of Yorktown ”
Get custom paper
NEW! smart matching with writer

During the American Revolution, the main types of weaponry were muskets, short range pistols, canons and swords.

The British Army had their back to the sea and were in a town that wasn’t heavily fortified. The American strategy was basic siege strategy in which trenches are dug parallel to the target, which is generally a fortress, and as a trench is dug troops and canon can move closer to the fortress. As the Americans began to build the second trench the French overran one redoubt and the Americans the other. Once the second trench was built all parts of Yorktown were in easy range of canon.

The British did try to retake the redoubts but were unsuccessful. Failing at that, and receiving no sea support, due to the French surrounding them, Cornwallis had no choice but to surrender.

The significance that the Battle of Yorktown holds to the American Revolution is that it was the last battle, save for a few small battles in the south, of the revolutionary war. It turned the tides for the patriots and gave them the upper hand. The American’s victory meant that the colonies were no longer under British rule, and the aftermath of the Battle of Yorktown led to the signing of a peace treaty and Americans independence.
Thanks to the aid from France, American Continental Army was able to effectively defeat the British at the Battle of Yorktown, using a combination of battle strategies, thus ending the conflict in America’s favor.

The Fight for American Independence : Battle of Yorktown. (2016, Mar 02). Retrieved from https://studymoose.com/the-fight-for-american-independence-battle-of-yorktown-essay 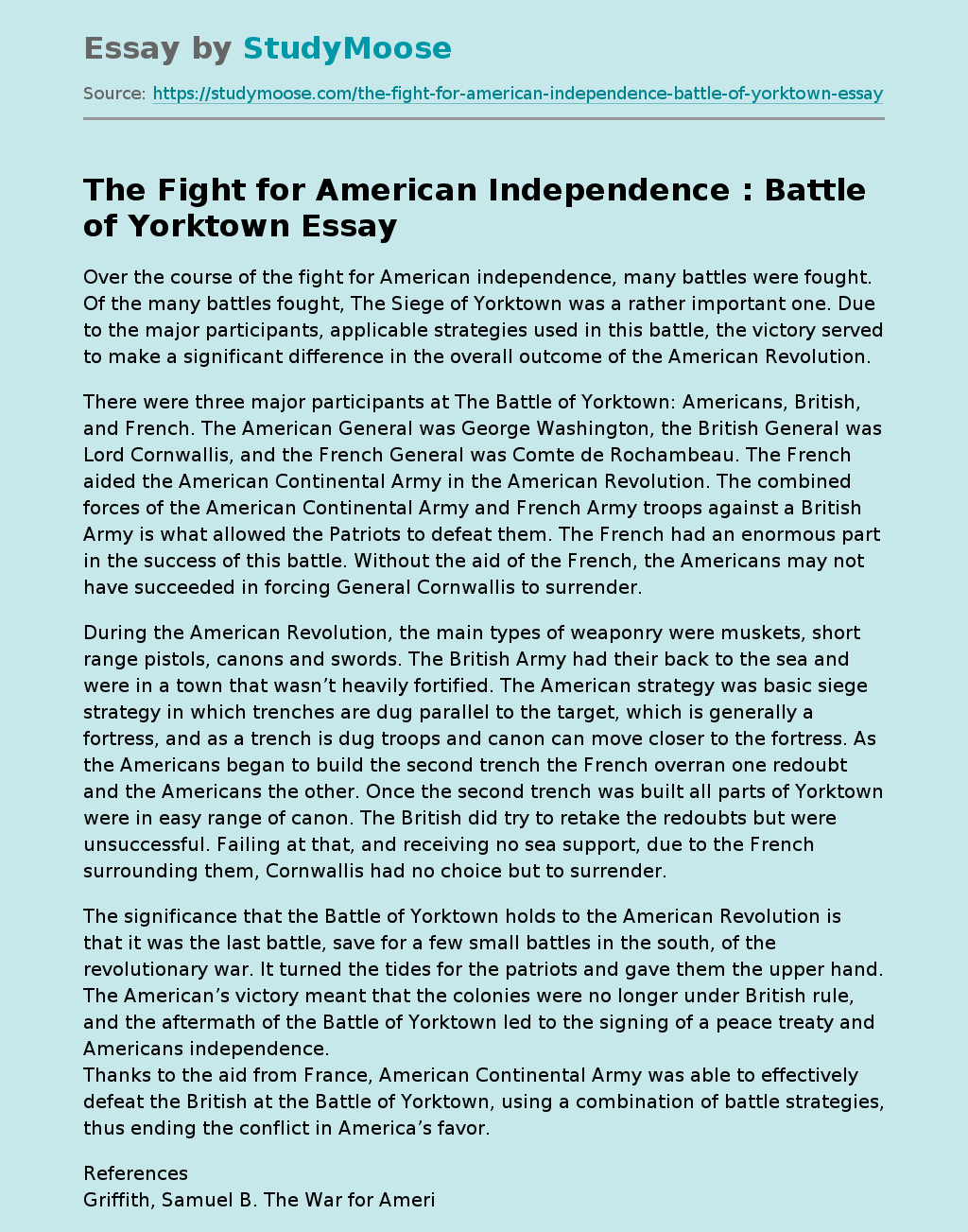