The Ferre Media Group case talks about a family business starting out as the Puerto Rican Cement Company in the 1940s, with a grandfather and son, Luis A. Ferre or Antonio’s father. But, Over the years and a few generations on, by the mid- 1960s tension and sibling rivalry started. Antonio Luis Ferre and his brothers divided the companies and their shares rather than to risk further family disharmony. After 8 years one sibling, Antonio Luis Ferre bought his father dying newspaper El Dia, in hoping to turn the newspaper company into the largest and most influential newspaper in Puerto Rice.

After 2 ½ years into it, El Nuevo Dia had become an important editorial voice. The Ferre Rangel family represents the fourth generation of long line of business and civic leaders. Antonio and his wife Luisa believed that the succession process began before the beginning. His children were educated in hopes to achieve excellence and do things well, for hope in the future the adult siblings considered business, since they could all conceivably want to be president of their company.

Antonio Luis Ferre struggles with the fact on how well the future generations will nature a culture of cooperation and communication without having the typical sibling and branch rivalries. Antonio knew this will be a factor knowing from past experiences. He did not want all his hard work or his dream to fail and fall right before him. He wanted to make sure that the company will stay within the family. How was he going to be able to keep them all together was the question.

In 1993, the Ferre Rangel family began to meet regularly as a family to discuss family and business issues.

Over the next several years the family developed a family constitution. An in it, it established guidelines for the involvement of the family members and eventually for future generations. Another one of Antonio’s struggles was how they were going to integrate their spouses into what they are doing. Antonio wanted to make sure that their spouses were involved. He hopes it would show them the hard work that they were doing to build this business as well as letting them know they have the opportunity to be a part of it.

Since Antonio was so committed in orderly transferring the power to the next generations, his next priority was to make sure the next generation paid attention the details. Antonio felt that the newspaper business lived and died by those details and by its reputation for responsible citizenship and journalistic independence. In order this to succeed Antonio presented himself as a role model, he believed this was the best way to lead by example to show his work ethics, compassion and love towards his work and to others.

To ensure the continuation of the spirit of enterprise and Ferre Media Group’s history of innovation, Antonio should welcome other ideas and values. So, having the family meetings helped tremendously build new ideas and encourage individual aspirations. Antonio said he wanted these meetings to help stop conflicts between the siblings and built strong relationships with one another. Antonio wanted the family to express and listen to other opinions and understand the different perspectives because without it, to him, it was consider a competition. Family unity was the utmost priority and with much communication, listening and compromising, trust was built. And so in collaboration with fourth generation members to continue to grow the family business Antonio helped launch the new paper Primera Hora in 1998 and a Spanish language newspaper in Orland in 2003.

This case shows most of the family’s success. I feel Antonio did everything that he could to keep tradition and to keep a business that has been in the family for almost 70 years. It’s also great that he still wanted to remain a mentor and advisor to the future generations and to accept new ideas and innovation. For Antonio the business he built was meant to be shared by his family. 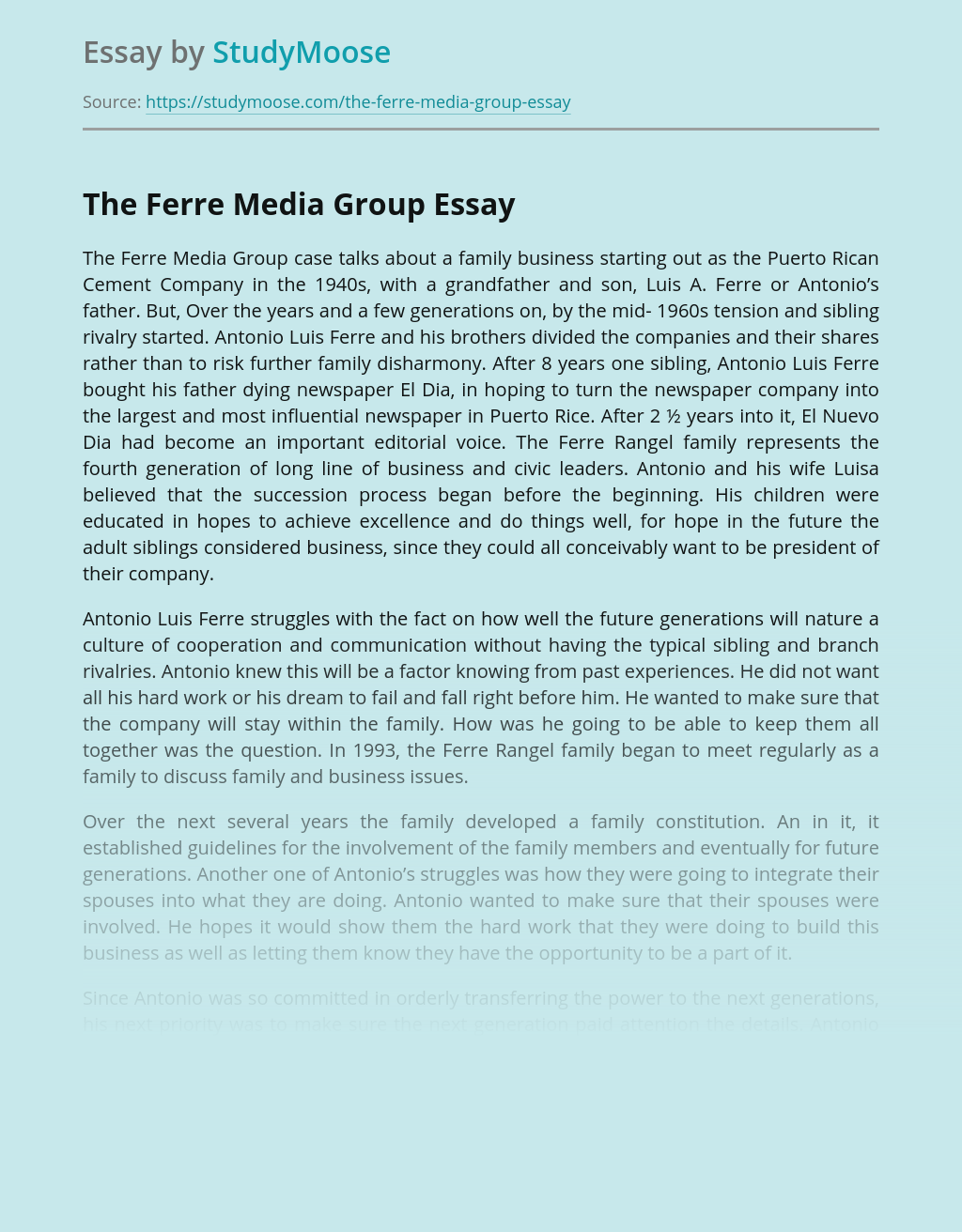 Don’t waste time
Get a verified writer to help you with The Ferre Media Group
Hire verified writer
$35.80 for a 2-page paper
Stay Safe, Stay Original