The Failure of Obamacare

There’s nothing mutual about the government forcing you to enter into a binding contract with a private company,” says Damon Root, senior editor of Reason Magazine. The Individual Mandate passed by President Obama in 2013 says that people must have health insurance, or coverage, by January 24, 2014. This act is called the Affordable Care Act, or ObamaCare. If you did not get coverage, a fine would have had to be paid. The payment choices for this fine was either two percent of your total income, $325 per household adult and 2.

Don't use plagiarized sources. Get your custom essay on
“ The Failure of Obamacare ”
Get custom paper
NEW! smart matching with writer

50 per household child, or $975 for the total household. Obamacare was estimated to cost almost $1.36 trillion over the course of ten years. Obamacare also cut almost $716 billion from the Medicare program and put the money back through the system (Barro). It also put new taxes in place, and these taxes would insure millions of people in America and raise the funds to run the program. Obamacare was overall a failure because it was unconstitutional, pushed away good doctors, and left many people unemployed.

Additionally, Obamacare was believed to have violated the rights of individuals, overall, by being unconstitutional. “The Constitution was a document that was intended to preserve liberty by limiting the powers of the federal government. It reserved most governmental powers to the state, and it protected the freedom of individuals. ObamaCare striped powers reserved for the states and attacked the freedom of individuals,” says Joseph Farah of Creators.com (Farah). As a result, Obamacare goes past the limited powers of the federal government (Farah).

Checks and balances were set to limit the powers of the government, and make sure that no one part of the government has too much power (Farah). There were three basic types of healthcare that the people have the choice of: single payer, two tiered, and the insurance mandate (Montgomery). Obamacare fell under the insurance mandate (Montgomery). As said before, those insurance plans are supposed to be choices (Montgomery). Unfortunately, if you enrolled in Obamacare, you did not have a choice and had to have the insurance mandate (Montgomery). Obamacare also violated the Constitution’s Origination Clause. The Clause stated that, “All bills for raising revenue shall originate in the House of Representatives; but the Senate may propose or concur with Amendments as on other Bills.” (Adler). Many people argued that Obamacare originated in the Senate. Before the Senate added 2,076 pages of Obamacare, the H.R. 3590 was a six page bill that talked about federal income credit and the rising of some estimated corporate income tax payments (Adler). The Senate reshaped the whole foundation of the bill (Adler). Therefore, Obamacare was believed to be unconstitutional and take away some freedoms of individual Americans.

Likewise, another argument against Obamacare was that it pushed away good doctors. Jason Fodeman from the Institute for HealthCare Consumerism said that, “The Patient Protection and Affordable Care Act is indeed bad for doctors, but it is always the patient that suffers the most.”( Fodeman). The amount that was paid for doctor visits under Obamacare was a lot less and this may have seemed to be a good thing (Fodeman). Although, on the other hand, people were receiving shorter visits, less face-to-face time with your doctor, and quicker discharges to the hospital (Fodeman). At the time, and present, health care was a highly regulated industry and was one of the highest regulated in the country (Fodeman). The Institute of Health Care Consumerism also stated that, “The PPACA will strip away physician autonomy, drown doctors in bureaucracy, and drain job satisfaction.”(Fodeman). As the profession weakened and broke down, many older doctors might have started to retire and younger doctors might have considered switching careers (Fodeman). Obamacare pushed away many good doctors and that was a problem that should not have gone unnoticed.

Yet another argument that was made against Obamacare was that it left many people unemployed. The individual mandate – the tax that effected people most – added an extra operation cost to companies, or businesses, which did not provide health insurance (Barro). Therefore, when businesses provided health insurance, the more people they could have provided it for, the more they had to pay (Barro). Many businesses laid off the part-time and lower waging workers (Barro). There were also limits on the amount doctors and hospitals had been paid (Barro). On the contrary, when people were laid off or fired from many businesses, there were not many job opportunities. Many people could not find jobs, which led them to collect unemployment, welfare, or Obamacare (Barro). This helped the Obamacare program a lot because the more people that enrolled, the better the program looked. Obamacare caused many people to lose jobs and collect unemployment.

Although Obamacare has its downside, it also can be a good thing. If there were not people out there who abused this privilege, it would be very beneficial to people in need. If there could have been a better plan behind this, it could have been more successful and lasted many years. There were many people out there who could not afford healthcare but were in dire need of it. It helped many people who needed it, but it also caused some people to take advantage of it. This was just one example of how government assistance has been warped and given a bad connotation. Overall, Obamacare was a failure because it was unconstitutional, pushed away good doctors, and left many people unemployed. In this sense, it was not a well-executed plan.

The Failure of Obamacare. (2021, Apr 19). Retrieved from https://studymoose.com/the-failure-of-obamacare-essay 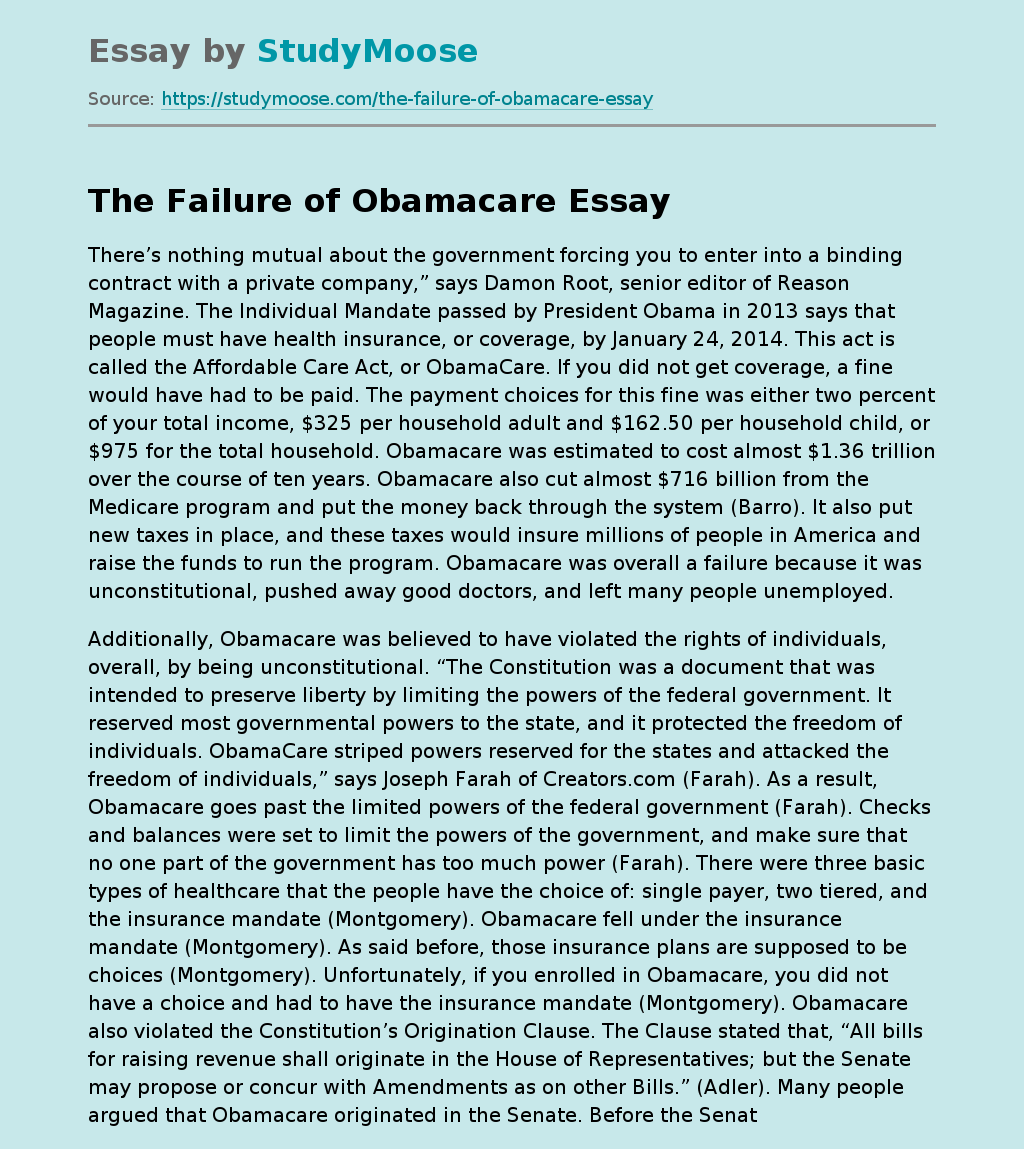