Market failure is very common in many markets in the world, it occurs when a well -established market fails to allocate resources properly. There are many types of market failures that exist but failure of the market on resources will be the main focus of the paper. It is the desire of any government to have a resourceful market because market is one of the major pillars of the economy. When market fails, the whole economy of the country fails and that is why the government intervenes in case a market fails.

Don't use plagiarized sources.
Get Your Custom Essay on Role of government in correcting market failure Just from $13,9/Page

There are many causes of market failure and that is where the government put a lot of pressure in order to rectify. The government has a major role to play in the market and its efforts cannot be ignored. The objective of the paper is to describe the role of government in correcting market failure being resourceful.

Market fails to be resourceful when there is no competition or when competition is not sufficient.

This occurs when the market experiences a high rate of mergers where many companies merge to form one big company. In this case a monopoly power is created in the market. This monopoly power prevents production because other companies or producers have no chance of venturing into the market in any way. This monopoly makes even the government to compromise with it because it gives the government threats of moving out of the market which means that the whole market would collapse. This kind of market cannot be productive in any way. However, the government has a major role in correcting this failure and it has all that it takes to correct it. The government should pass regulations that can be used to control this problem for example the government can introduce a price control regulation, this would introduce a fresh competition in the market and thus the market would be resourceful. A good example is the introduction of more telecommunication services in Britain; this broke the monopoly power that existed in that market (Samuelson, 2010).

Government can introduce tax relief plan in the market, this is a step of government to give some business a period in which they should not pay tax. This occurs if the market failure to be resourceful is as a result of immobility of resources. Resource mobility is one of the dangerous problems that occur in every market. Labor, entrepreneurship, capital and land are supposed to move freely in a health market but these changes when all stakeholders in the market decide to move to another market. This action leaves the market without stakeholders and also the unemployment increases dramatically. The government can correct this market failure through introducing a tax relief in the market. The tax relief encourages firms to stay in the market and more to venture in the market and still the resources will be moving freely. And a good example is the application of tax relief to United States textile industries in 2000 (Hetzel, 2012).

In most cases, a market that is dominated by the government more where governments corporation are more than the private companies, that kind of market in most cases is not usually resourceful. This is because Government Corporations are usually mismanaged and they also experience a lot of difficulties and thus they are not preferred by many consumers. This makes the market to be stagnant and thus it fails to be resourceful. The government has the capability of correcting this market failure because the market failure is as a result of government actions. It can correct this failure by privatizing most of its corporations. This is where the government gives individuals the right to manage the corporations fully. It can also give the private companies the right to carry some of its public operations like building roads. A good example is the Britain government that gave the private business the right to build roads and to manage prisons. This is one of the effective roles of government in correcting this market failure. 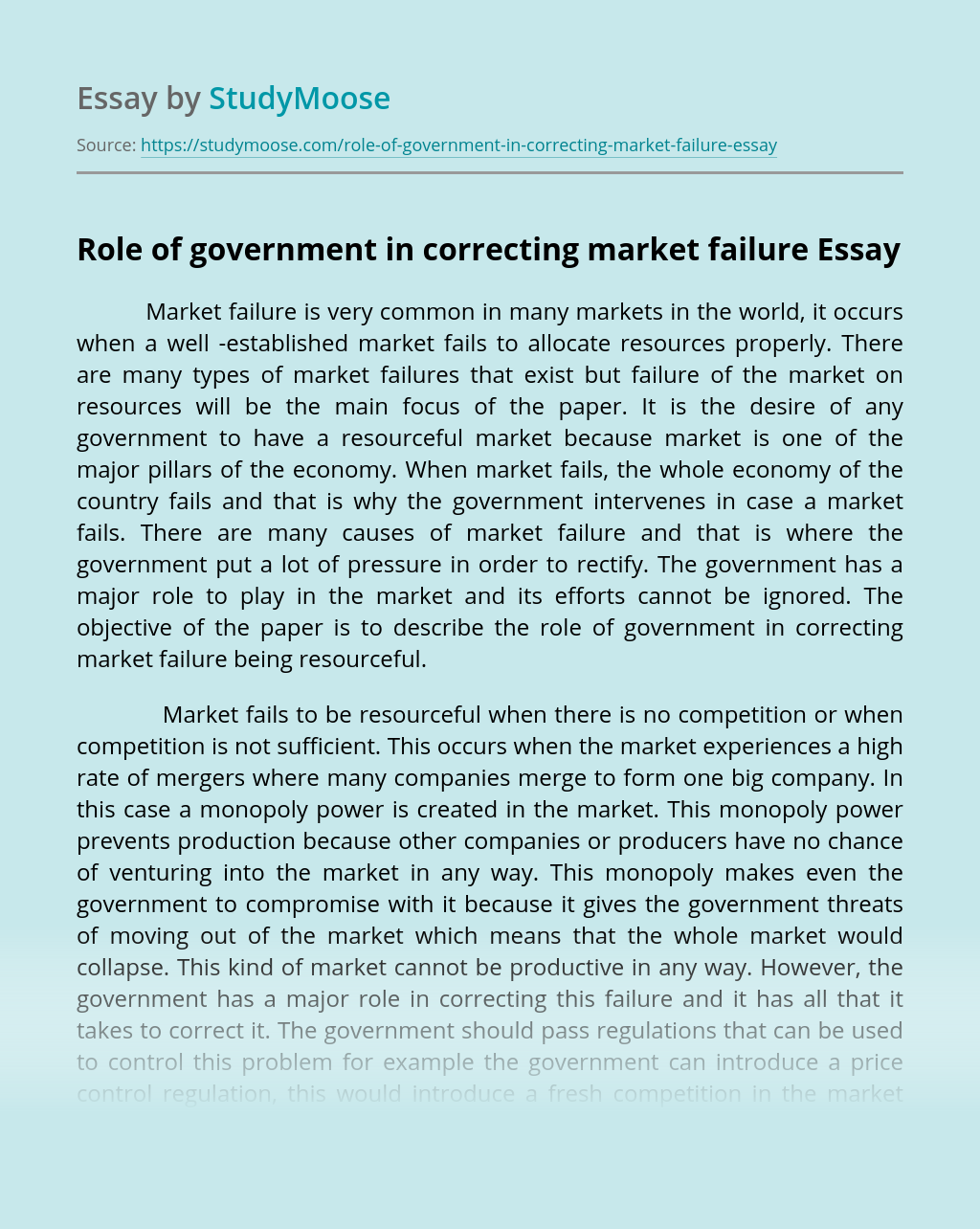 Analysis of Naxalism in India

Rate this post One of the largest internal security threats that the government of India faces today is Naxalism. 1Recent reports show that naxalist movements have spread to as many as 22 states across India, including states such as Gujarat, Punjab, Delhi and Uttarakhand that were earlier known not to have any links to naxalism...

Get Essay
Role of government in correcting market failure

Rate this post           Market failure is very common in many markets in the world, it occurs when a well -established market fails to allocate resources properly. There are many types of market failures that exist but failure of the market on resources will be the main focus of the paper....

Rate this post In reviewing the film 12 Angry Men, I have identified many types of influence tactics being utilized by the jurors. The five tactics that I believe were most used in this film were; reason or rational persuasion, coalition building, ingratiation, inspiration and pressure. Although there were several jurors throughout the film who...