Q: ‘The word failure should never be used in education.’ Discuss.

“Failure is not the end of the journey.” was an impactful phrase that Steve Jobs once said in his most eulogised moment of wit. I would dare to say that ‘failure’ is not a foreign word to anyone in the world and to the large majority, it is never viewed as a pleasant word to hear. In dictionaries, the word failure is often defined as the lack of skill or knowledge to succeed in accomplishing a task, yet ironically, the word failure is very often used in schools, where students attend to acquire skills and knowledge.

Turn in your highest-quality paper
Get a qualified writer to help you with
“ Discuss About Failure ”
Get high-quality paper
NEW! AI matching with writer

Hence, examination papers have changed and the syllabus only gets tougher.

Students therefore are constantly bombarded with difficult and mind-boggling questions and tests, thus it is only natural that there are bound to be failures within a class. However, for the students that had studied very hard for the test, failing would only crush their confidence and pride. A research carried out by a group of students in Tokyo University had found out that 2 out of 7 students in Japanese High Schools are demoralised after failing their first few semestral assessments and their grades continue to suffer all year round as they had already lost the will to persevere and strive for excellence.

This study supports my view that ‘failure’ demoralises people as it extinguishes the fiery will within students and their drive to excel.

More often than not, being called a failure in schools may develop in students a form of self-fulfilling prophecy as their constant failures may have convinced them that they may indeed be useless and will never succeed in the future. Hence, I strongly feel that the word failure is too harsh a term to judge students based on their academic and holistic achievements alone as this will in fact demoralise them. Another reason why I feel that the word ‘failure’ should only be used to a bare minimum is because it creates more demanding parents. All parents have high hopes for their child, and I would dare to say that every parent wishes for their child to be able to successfully climb the rungs of the social ladder and stand at its peak.

However to do that, excellent academic and holistic grades must be attained. A survey conducted by a group of students studying psychology in the National University of Singapore (NUS) in 2011 observed that 75% of Singaporean families display prejudice against failure and envisage their own child enrolling into the top medical courses of the local universities in Singapore. This study displays the stress that students in Singapore face as now not only do they have to excel in their studies to achieve a decent grade, but they are also expected to live up to their parent’s extremely high expectations. Such a scenario is ubiquitous in almost every Asian country and community, take the Asian families in Japan and the Asian communities in the United States for example, many Asian children fear showing their report cards to their parents if they had failed any subject as they fear the tongue-lashing that they receive upon showing their grades.

Moreover, Asian families have been stereotyped to be very demanding as they demand that their child score straight ‘A’s for his or her examinations. This scenario is evident from the book ‘Battle Hymn of the Tiger Mother’ by Amy Chua which describes the typical strict Chinese upbringing where even an A- grade is not acceptable much less a ‘failure’ grade. To fail is to bring shame and dishonour to the family. Thus, I believe that the root of all these expectations branch from the very use of the word ‘failure’ as it somehow segregates the students based on their abilities into two groups – the successful and the failures, and parents would therefore want to push their child even harder to be able to enter the ranks of the successful and falling into the pits of failure is not favoured by most parents. Hence, I feel that the word ‘failure’ should not be used most of the time so that children would not need to fear failing and the ridiculously high expectations of parents can be somewhat mellowed.

Lastly, as cliché as it may sounds, the word ‘failure’ promotes a segregated community in schools. Very often, it is a common sight to see the students that excel in their studies form their own small cluster while the ostracised students that have consistently failed their examinations would form their own cliques. Such scenarios are especially evident in schools in the Western countries, such as the United States and the United Kingdom. Very often, students that fail their tests continuously would rather invest their time in beautifying their aesthetic appearances or in honing their skills in their extra-curricular activities. While the students that score terrific grades, on the other hand, are labelled ‘muggers’ and ‘nerds’, hence this gave rise to the much stereotyped ‘popular’ and ‘unpopular’ kids in many American schools. This, thus, unconsciously created a segregated community in schools and as a result of this segregation bullying is rampant in schools as the more popular but academically weaker students would threaten the smarter ‘nerds’ to accomplish their work for them. This is supported by a documentary carried out by Discovery Channel, titled Bully, on the reasons behind bullying, which found out that one of the main reason why children resort to bullying is to achieve the much desired grades they wanted.

Thus, ‘failure’ had unknowingly created a hierarchy within many schools and therefore, I strongly feel that the word ‘failure’ should not be used to a large extent. However, critics of my argument may argue that the word ‘failure’ may instil in students the need to improve and work harder, and motivates them to stretch themselves to their fullest potential. However, I believe that this is an extremely idealistic view as, not every student can remain optimistic upon receiving such dreadful grades. Moreover, such a argument also fails to take into consideration the students that had failed multiple times. Failing a couple of times may motivate one to try and work harder but the constant failure that some students experience would crush their determination and willingness to work hard. Hence I believe that if nothing is done to at the point of receiving the failure grade, and teachers allow things to go by its on course, the student may be badly shaken and demoralised and as a result instead of improving his grades, he may actually worsen and score far worse grades.

Thus, this brings me back to my point that ‘failure’ should not be used in our education systems most of our time as every student have differing levels of motivation and not everyone can take ‘failure’ so easily, and instead of improving themselves they end up despondent and unwilling to work hard. Critics of my argument may also claim that the competition that arises due the usage of ‘failure’ is beneficial to the students. However, this argument is flawed and the argument is too naive. This is because they fail to realise that is because of such intense competition that students may resort to cheating and other underhanded measures to attain a passable grade or their desired grades. In a study published in the Los Angeles Times, it was found that students cheat to attain higher grades to meet with their parents expectations or to enter into a high paying job from the top Ivy League Universities.

Moreover, with globalisation, the presence of scholars in schools contribute to the competition that local students face, and this has actually created such a stressful environment as the scholars contribute to the top scores of many major examinations and as a result the bell curve system that determine ones grade would shift to the right and students would require to score higher grades to attain their desired grades. This additional stress from the increase in competition if not managed properly would prove to be detrimental to ones mental fitness, and students that are unable to take such intense competition now, may just crumble under the immense stress that all students have to shoulder. Therefore, I strongly believe that the competition that ‘failure’ brings about brings more disadvantages than benefits and hence, I feel that ‘failure’ should not be used in our education most of the time.

Therefore, in conclusion, does ‘failure’ necessarily bring more harm than good? While ‘failure’ does indeed have its good points, like bringing about differential learning, beneficial competition to those that require it, it brings about much more adverse effects to our community. The word ‘failure’ can badly demoralise students, create more ‘Tiger Mothers’ – a term used to describe more demanding parents, and a segregated community in many schools. Thus, I strongly feel that schools being the place that students attend to further improve themselves and acquire new knowledge, should not use the word ‘failure’ most of the time as it simply does not bring about much benefits. Therefore, I would like to reiterate that I strongly feel that the word ‘failure’ should not be used in today’s education system most of the time. 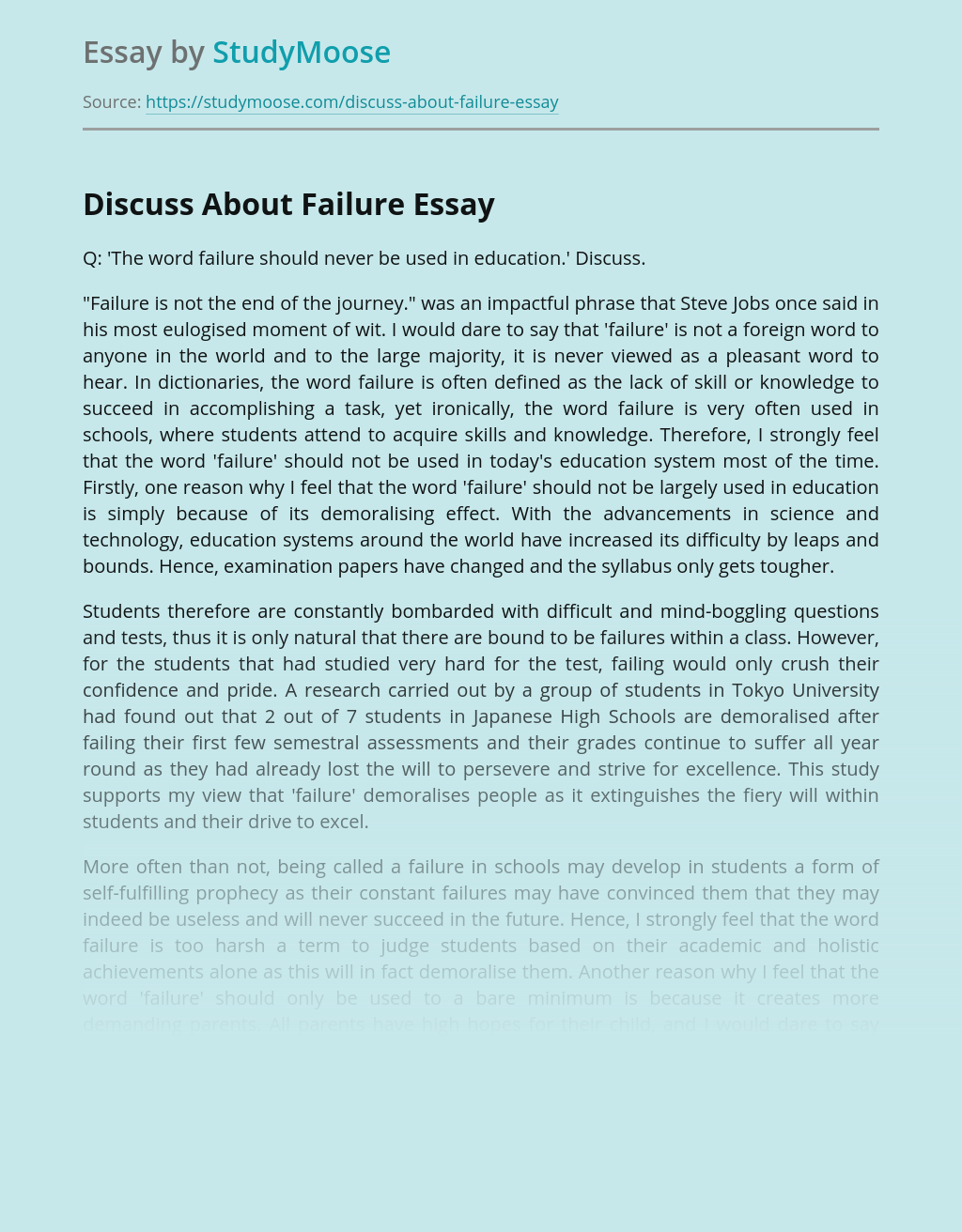 Turn in your highest-quality paper
Get a qualified writer to help you with
“ Discuss About Failure ”
Get high-quality paper
Helping students since 2015
Stay Safe, Stay Original