The Evolution of Communication

Don't use plagiarized sources.
Get Your Custom Essay on The Evolution of Communication Just from $13,9/Page

A huge step forward in communications was the written word, which came thousands of years ago, when civilizations wanted to record their experiences. Today, methods of written communication include letters, memo, e-mails, newsletters, reports, faxes, books, pamphlets and many others. In communicating through the written word, it is imperative that the audience to which the piece is being written is considered such that it caters to that particular audience. This allows for highest chance of successfully delivering the message or relaying the communication to that audience. If this consideration is overlooked, then the piece of written communication might be completely inaccessible to those who are reading it.

For example, if a letter is being written by the CEO of a company to his employees about a change in the company’s structure, the tone and style of the letter must be professional and informative. Accordingly, there may be industry jargon or other specific information known to the employees of that company that other people might not be familiar with. Since the CEO is writing to employees and not these other people, he can and should discuss terms or concepts familiar to the company rather than broadening the letter to be accessible to a wider audience. If he was writing a letter to someone in a different company, for example, he would need to alter his content and tone in order to leave out company-specific information or details.

Assuming that the writer takes into consideration the audience to which he is addressing, written communication can be one of the most effective methods of communicating. For example, written communication, like a letter or an e-mail or a corporate memo, establishes a paper trail of correspondence to which any party can later recall in order to settle a dispute. This can prove invaluable as other forms of communication, such as verbal, like a phone call or a face-to-face meeting, fail to leave this trail and can sometimes become a subjective case of what one person remembers versus what the other party believes to have happened. Additionally, written communication can often seem more professional or proper, since everything is written and everyone has access to the same written information, whereas other communication, like a group of people talking and relaying that information verbally, can often be altered and watered down such that different people receive different information, like the childhood game of telephone.

Nowhere is the example of communications’ expanded presence more exemplified than the emergence of social networking sites over the past decade, which have fundamentally changed the way that humans interact with one another. Social networking is a phenomenon that has taken the world by storm mostly over the last decade. AOL’s Instant Messenger and other similar programs first allowed people to communicate over the internet, which evolved into social networking sites such as Friendster, MySpace and Facebook and Twitter.

This evolution has yielded ever-expanding ways of communicating with people over the internet. No longer is it possible to only send text messages. Now, people can send text, pictures, videos and more and have access to all of these files via their social networking accounts. While these changes have given wonder and amazement to our capabilities, the effects such changes have had on friendship are not all positive. Increased emphasis on social networking and digital communications have undermined the newer generation’s ability and proclivity to build and sustain traditional normal and healthy human relationships (Ad Age 2006).

While such technology is beneficial in many ways, an inherent caveat of the expansion of technology is the increasing need for emphasis on computer and web ethics. Such ethics, whose presence or necessity seemed unthinkably unnecessary or irrelevant, now come to dominate the way in which society uses the technology at their disposal. The increase of this technology has led to a vast increase of freedom and unchecked expressivity, exemplified primarily through the way people use social networks. People can enter their own information, say what they want to who they want without any real consequences, since they have the safety veil of the computer removing them from real consequence. In this way, an ethical code must be discussed and standardized going forward so that society is able to embrace the technology without perverting its potential applications.

The Evolution of Communication. (2016, Dec 29). Retrieved from https://studymoose.com/the-evolution-of-communication-essay 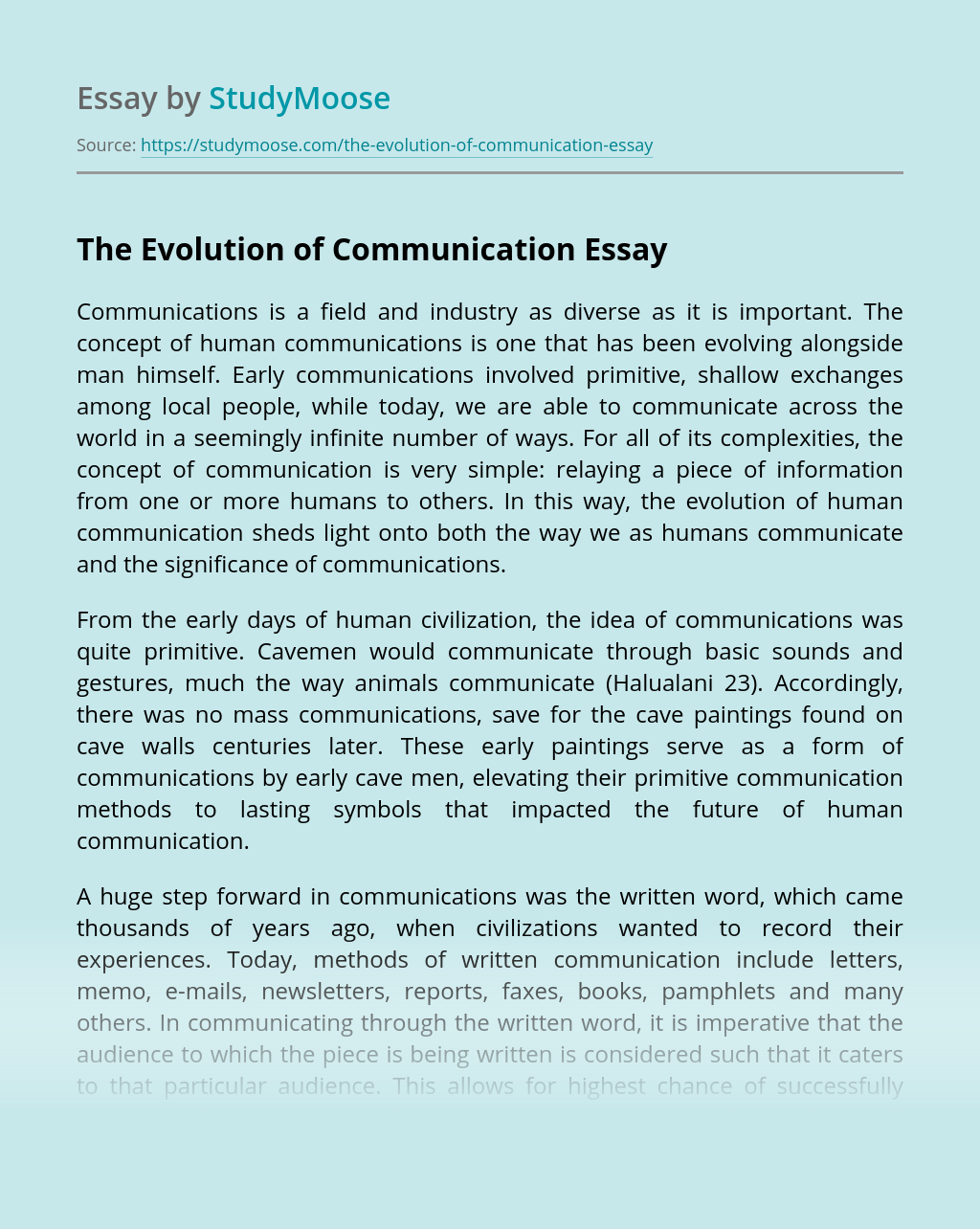 Nowadays the world modifications in so numerous parts such as environment, economic, cultural, technology and so on … And all of those things will be result in a business. Particularly, innovation has change actually quick over last twenty years. It is made the word appear smaller and make people closer.Communicate today has actually changed from...

Get Essay
What Makes An Effective Communicator

The idea that we can define when effective communication is being conducted in the ‘right’ way, and when it is having ‘positive’ effects. Basically, this is the case when the communicator has taken into account the communication factors, particularly the needs of the receiver of the communication, and the principle of how that form of...

Directness and Indirectness in Different Contexts

In modern life, people communicate with others in different ways; for instance, the way that directness or indirectness can affect the success or failure of communication. So, we wonder which way is better for human communications. The definition of directness is the character of being accurate in course or aim or straightforwardness , the quality...