The ethical teachings of Anglicanism

The word ‘Anglican’ originates from “ecclesia anglicana” a Medieval Latin phrase, dating to at least 1246 meaning ‘the English Church’. The Anglican Church dates back to the year 1538.

Anglican ethical perspectives share similarities with Protestant and Catholic approaches, but they also have a particular character of their own. Anglican ethical tradition also draws on several central Christian beliefs held in common with Catholic theology.

The roots of Anglican ethics begin in a belief that God’s divine order is established in Jesus Christ and his teachings.

Turn in your highest-quality paper
Get a qualified writer to help you with
“ The ethical teachings of Anglicanism ”
Get high-quality paper
NEW! AI matching with writers

This provides the belief that Christian identity and action go beyond an individual’s faithfulness and personal relationship with God. To live a full, faithful life, an individual should apply the principle “love one another as I have loved you” to every aspect of their lives.

The Anglican perspective on Christian ethics was influenced greatly by theologian Richard Hooker. Hooker wrote Laws of Ecclesiastical Polity at the end of the sixteenth century in response to challenge from the Roman Catholic and Puritan churches.

His work sought to demonstrate theological reasons for the Anglican Teachings and Law, and point out ways that the Anglican way was consistent with the true intentions of the early Christian church.

Hooker believed there was a problem in taking the Bible as the only source for Christian belief. He gave that the Bible was not meant to stand alone in a Christian faith community.

He believed the scriptures were to be interpreted through human reason, so that people could make sense of the world by comparing information from various sources – the scriptures, prior knowledge, and personal experiences.

He also deemed that there were certain matters and predicaments that Christians face in the constantly changing society that were not dealt with in the scriptures. In order to determine a ‘Christian’ response, humans are required to use their own sense of reason to apply the scriptures to their lives.

Richard Hooker shaped Anglican ethics by arguing that scripture, tradition and reason are all necessary for a faithful, lively and discerning faith community. This combination was named the “three-legged stool” of Anglicanism. He sought continuity with the past while discerning answers for new situations which arose.

The stool works so that each leg balances and informs the other as a faithful response to the particular ethical issue is discerned. In the process, a response that is deemed ‘faithful’ should be supported by at least two of the three legs.

The “three-legged stool” has served Anglicans well. By including the balance with reason and tradition, Anglicans have come to understand that not all ethical or moral contexts in the Bible are prescriptive for Christian living.

Further consideration of what is ethically right is necessary since many current issues are not mentioned in the Bible. Questions of pollution, or politics, are not settled easily by using the scriptures as a guide. Anglicans continue to use the ‘three-legged stool’ method to make the right decisions, morally and ethically.

The Anglican Church of Australia is established under a constitution. It sets out the character of the faith and the way the church is organized and its life regulated.

The General Synod is the national assembly of the church and it makes decisions by resolution, passing a rule or a canon.

Sometimes current ethical issues are discussed nationally, and resolutions from General Synod are made. Resolutions are the conversation that the Church has with society and its members. Resolutions are not binding on the Church in the same way as legislation which is passed by Canon. They instead reveal the consensus between Anglicans about particular matters at a point in time. Some resolutions are more widely held views than others. The views of individual Anglicans, priests and even by Dioceses can vary from resolutions at times.

The church has expressed their views, through resolution, on several ethical issues. For example:•EuthanasiaThe report affirms that life is a gift from God, and expresses grave concern at the legalization of euthanasia. It questions whether a practice of voluntary euthanasia can easily be prevented from sliding into a practice of involuntary euthanasia. It affirms the right of patients to decline treatment but not to expect the active intervention by medical staff to end their lives. It urges members of State legislatures to vote against legislation to legalize euthanasia when such matters come before their Parliaments.

•HomosexualityThe Anglican Church does not condone the liturgical blessing of same sex relationships, and does not condone the ordination of people in open committed same sex relationships. It welcomes the initiative of the Federal Parliament in clarifying that marriage, at law in this country, is the union of a man and a woman to the exclusion of all others entered into for life.

Unlike other traditions, The Anglican Church does not have a governing body that restricts or ensures certain behavior by the various member churches. It does not have a summary of doctrine or a founding theologian to refer to. Anglicanism developed a vernacular prayer book, called the Book of Common Prayer. Anglicans have typically appealed to the Book of Common Prayer and its offshoots as a guide to Anglican theology and practice.

There are several theologians whose work has been influential on the Anglican faith.

Richard Hooker was mentioned previously, but there is also Lancelot Andrewes who helped compile the Authorised Version of the bible. He also headed the First Westminster Company which took charge of the first books of the Old Testament.

John Cosin played a prominent part in the revision of the prayer-book, and he wrote several books on Anglican teachings, including Notes and Collections on the Book of Common Prayer.

The Thirty-Nine Articles of Religion, although not binding, have also been a great shaping force on the ethos of Anglicanism. They provide information on the behaviour expected of all Anglicans.

Generally speaking, Anglican ethics are drawn from several different informed sources, and seek to uphold the dignity of the human beings.

The ethical teachings of Anglicanism. (2016, Jul 31). Retrieved from http://studymoose.com/the-ethical-teachings-of-anglicanism-essay 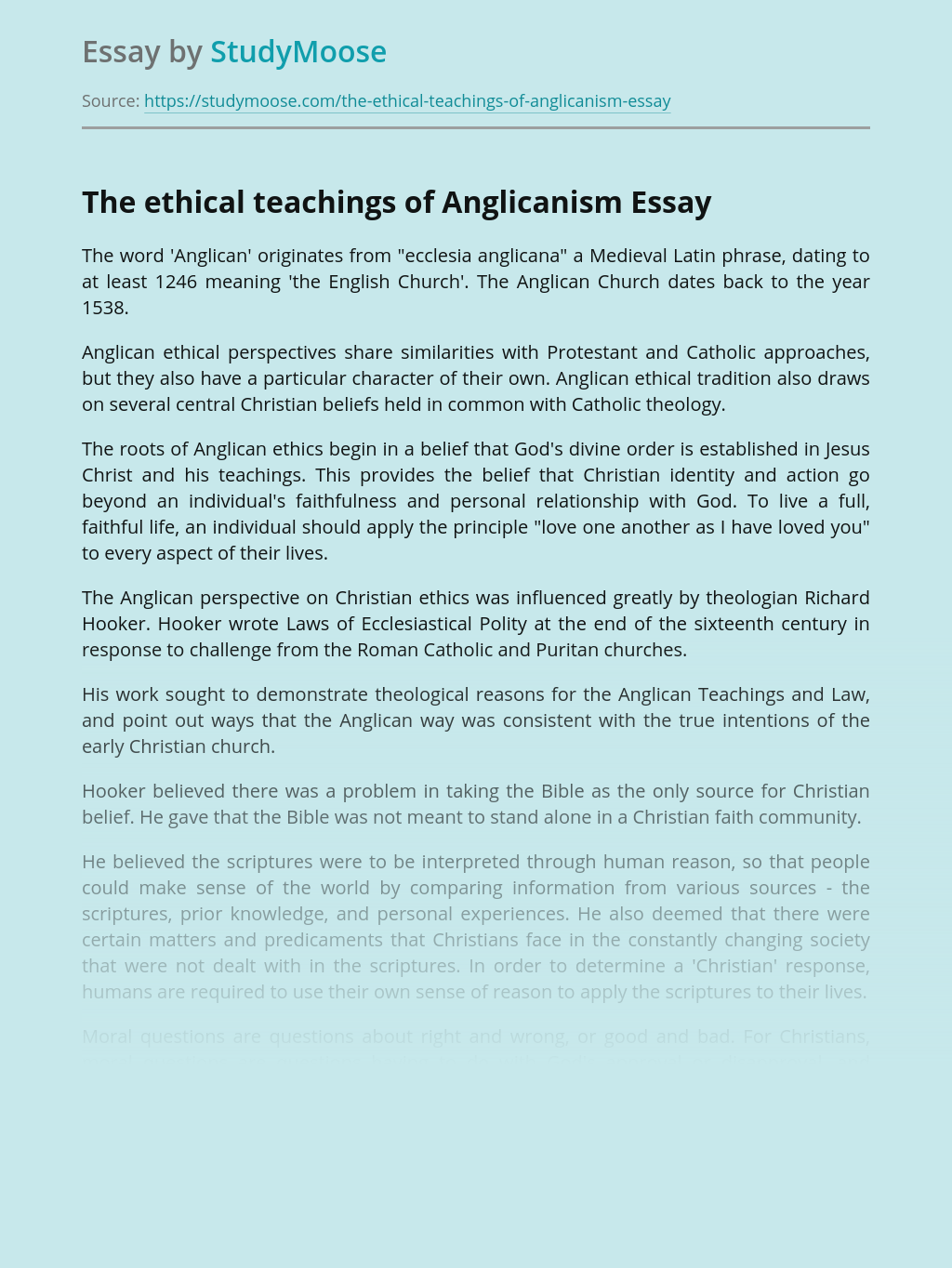 Turn in your highest-quality paper
Get a qualified writer to help you with
“ The ethical teachings of Anglicanism ”
Get high-quality paper
Helping students since 2015
Stay Safe, Stay Original