Teachings of Discipleship Put Into Action

The teachings I explained in part 1 affect the life of a Christian in many ways. The 3 teachings I chose to explain how they are put into action are:-

* You only need to be an ordinary person

* Discipleship requires you to put others before yourself

Christians today obey the commission which Jesus gave to the apostles. Some people in today’s society feel they have a vocation to serve God in a particular way, through: preaching, missionary work, fighting injustice and healing ministry.

Don't use plagiarized sources. Get your custom essay on
“ Teachings of Discipleship Put Into Action ”
Get custom paper
NEW! smart matching with writer

In this essay I have chosen to demonstrate how Christian’s today put the teachings into action by using Mother Teresa and Martin Luther King as an examples to help explain this.

According to Mark’s Gospel, you only need to be an ordinary person for Discipleship. This is shown in Mark 1:16-20 when Jesus calls his first disciples:-

“Come with me I will teach you to catch people.”

Jesus didn’t choose rich and important people he chose people who are average and had normal, everyday jobs e.

g. fishing because Jesus accepted everyone for who they were. A Christian in today’s world might put this into action just by being an ordinary person who decides to obey the Commission given by Jesus. Mother Teresa is an example of a modern disciple who has done this. It all began when she joined her local Church youth group and became interested in missionaries. She responded to her first call of a vocation as a Catholic missionary nun and then later went to help people living in poverty.

She was just an ordinary person going to church but because she wanted to serve God in a particular way she put this teaching into action. Another example of a modern disciple is Martin Luther King. He was a man who should up for racial equality even though he was an ordinary person.

Mark’s Gospel also teaches that discipleship requires Sacrifices. This is shown in Mark 12: 41- 44 when the widow gives all she has to live on to the church treasury:-

“She gave all she had to live on.”

Discipleship requires you to give up everything you own even your family, friends and possessions because to be a disciple you don’t need possessions. Mother Teresa puts this into action because she gave up everything to become a missionary nun. All she owned was a white sari with a blue stripes because this was all she needed to obey Jesus’ commission. Money is not needed to obey Jesus’ commission. Mother Teresa once said,

“Let us more and more insist on raising funds of love, of kindness, of understanding, of peace. Money will come if we seek first the Kingdom of God – the rest will be given.”

Although Martin Luther King had a wife and four children, he was willing to give up his life to stand up for something he strongly believed in and tragically he was assassinated on April 4th, 1968.

Mark’s Gospel also teaches that discipleship requires you to put others before yourself. This is shown in Mark 8: 34-38 when Jesus is telling his disciples the cost of discipleship:-

“He must deny self, take up his cross, and follow me.”

He says, “Deny self” which means as I said in part 1 that disciples should put others before themselves and they should put their own needs and wishes last. A Christian in today’s world might put this into action not only by Missionary work but by small, simple ways e.g. giving money to charity. Mother Teresa put the teaching in Mark’s Gospel into action by helping all the sick Indian people living in poverty. She helped other people who are in need of help rather than herself and therefore is following the teachings given by Jesus in Mark’s Gospel. Martin Luther King also put others before himself because he fought for civil rights for everybody not just himself even though he got arrested 30 times for this.

After I have explained my three chosen teachings and shown how modern disciples put them into action, I have learnt that for discipleship there are many teachings that are required to follow for discipleship and Modern day disciples do this in many different ways. Some people decide to devote their whole life in serving God (Mother Teresa) and others help in small sometimes unnoticeable ways. Mother Teresa once said was,

“In this life we cannot do great things. We can only do small things with great love.”

What she means is that we are not expected to go to extremes and cure world hunger for example. She means that we can do small things to help people in need for example donating money for charity. In conclusion, Mark’s Gospel demonstrates how to put the teachings into action today which many people already do in their everyday lives.

Teachings of Discipleship Put Into Action. (2020, Jun 02). Retrieved from http://studymoose.com/teachings-discipleship-put-action-new-essay 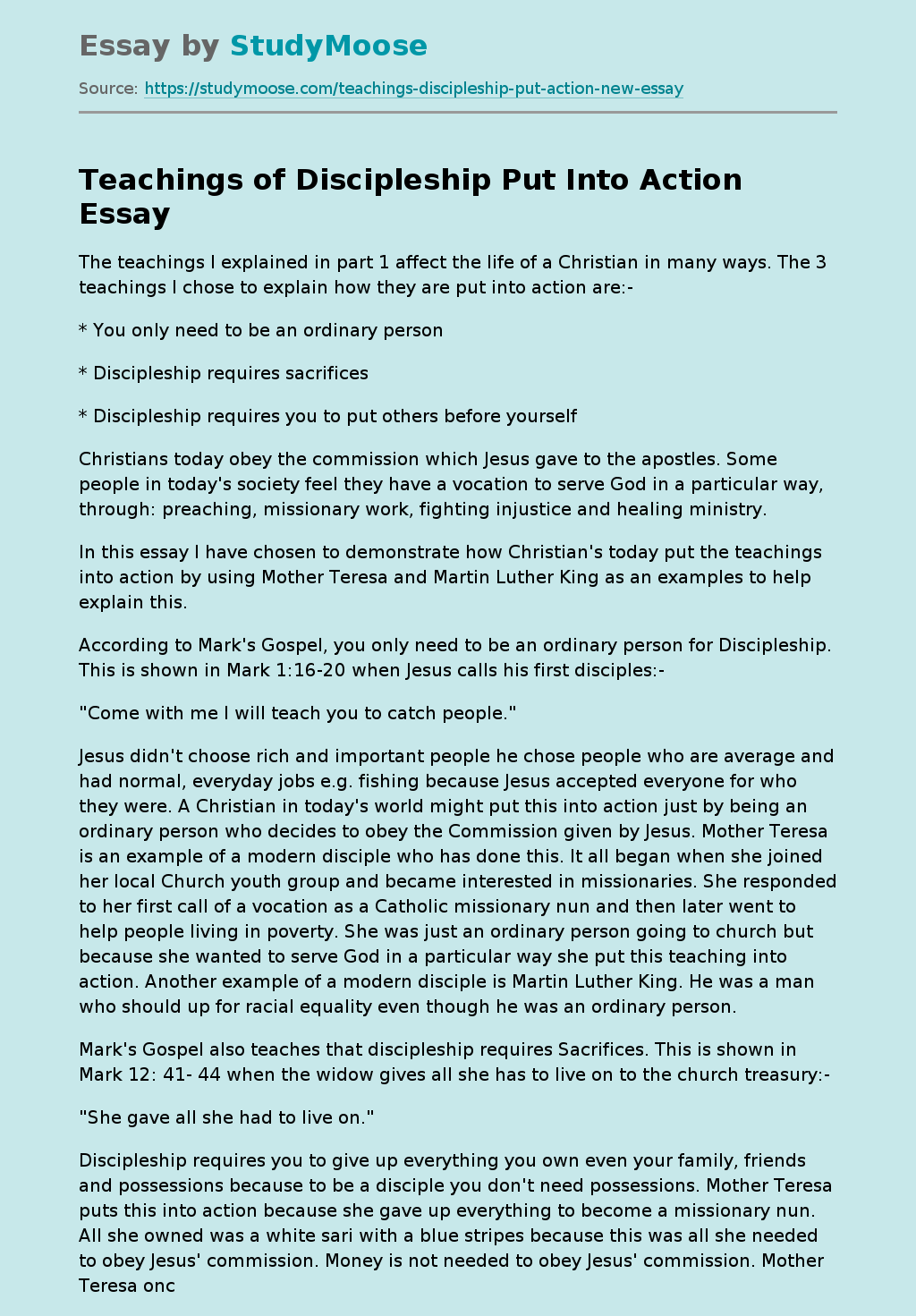