The effects of personality on sports performance

Turn in your highest-quality paper
Get a qualified writer to help you with
“ The effects of personality on sports performance ”
Get high-quality paper
NEW! AI matching with writer

’ Among recent definitions, two are important to us:

Marten’s schematic view is seen as having three different levels, which are all related to one another. These are:

The psychological core is ‘the real you’, its what contains your beliefs, attitudes, interests and values.

These are seen to be relatively stable. A typical response would be the usual ways you respond to your environment, the world around you and the way you handle certain situations. E.g. you might get angry and shout after being fouled in football, as you feel it was unfair and unsportsman-like, on the other hand, you may be really quiet and shy when you find yourself meeting new people.

These are typical of the situation and give a good insight into your psychological core.

Role related behaviour is determined entirely by the circumstance you find yourself in. It is the most changeable part of your personality. Your personality will change as your perception of the environment changes. E.g. In the morning you are captaining a team and have to show leadership skills, in the evening, you work a part time job and need to follow instructions.

Most psychologists accept the interactionist view when explaining behaviour, it says that you need to consider how situation and personality traits link together. It suggests when situational factors are strong, like in a penalty shoot-out in football, they are more likely to predict behaviour rather than personality. An athlete may be very quiet in everyday life, but will scream and behave erratically if they scored a winning goal.

This approach to personality suggests that personality is made up of the conscious and the unconscious. The first part is called the ‘id’ which stands for the instinctive drive. This is the part of your personality that is unconscious, and makes you do things without thinking. E.g. a sprinter at the starting line in an Olympic final may unconsciously start to feel threatened by all of the expectations riding on them, causing their muscles to freeze through high anxiety. The second part of your personality is the ego, the conscious part. Then the final part is your super ego, which is the moral conscience you have.

The effects of the ego and super ego can be seen when a football player wont take a penalty in a shoot-out because they are worried about letting their team down. The psychodynamic view tries to understand the individual as a whole rather thana looking at different parts of their personality. This approach isn’t used very often in sport as it focuses on the reasons why we behave a certain way, it focuses on behaviour that comes from an individual and ignores the athlete’s environment. This theory, however, is useful when psychologists are trying to explain behaviour because it does help you to understand that not all behaviour is consciously under the athlete’s control.

The effects of personality on sports performance. (2016, Apr 03). Retrieved from https://studymoose.com/the-effects-of-personality-on-sports-performance-essay 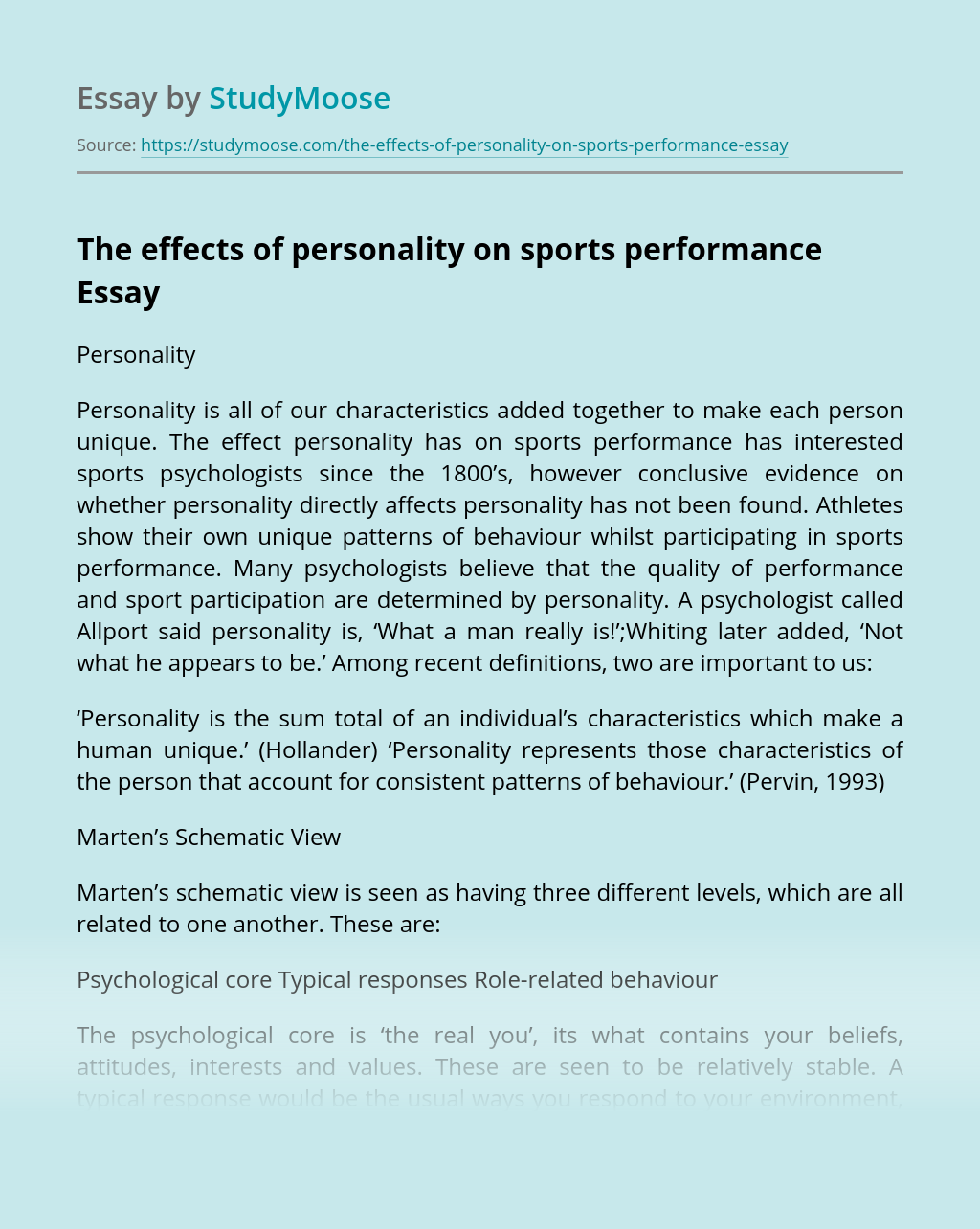 Turn in your highest-quality paper
Get a qualified writer to help you with
“ The effects of personality on sports performance ”
Get high-quality paper
Helping students since 2015
Stay Safe, Stay Original